The Oregon Graduate Center (OGC) was a private postgraduate research university in Washington County west of the Beaverton Campus. Governor Mark Hatfield's advisory committee recommended the rapid creation of the center in 1962 as a university with support from Howard Vollum and the City Club of Portland. The Tektronix Foundation provided a grant of $2M and OGC was incorporated on April 2, 1963 and opened in 1966.

This research university provided Tektronix engineers and scientists with nearby access to continuing education and technology. This Winter 1970 TekTalk features an inside look at OGC. 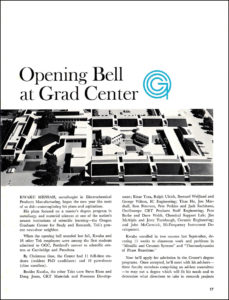