Everyone is familiar with those little beads of loose fill packing "popcorn".  Most people don't know where those were invented and under what conditions.

Sometime in the 1950s Tektronix was looking for a better way to cushion products for shipping.  Someone came up with the idea of using actual popped popcorn.  We don't know for which products and for how long they did this. We believe they used hot-air popped corn from a local vendor in Beaverton. This excerpt is from John Kobbe's story on Oscilloscope Patents.

Shortly after I came to work at Tek, during the winter of ’51-’52, I was working in the test department. After we got through checking and calibrating the scopes, we would put them on a cycle rack which turned them on 45 minutes and off 15 minutes so we would catch early failures . After about 24 hours, Paul Belles would prepare and ship them. Paul decided he would save some money. He apparently had a neighbor or knew some farmer that grew popcorn. He made a deal to get some popcorn and use it for packing material. I don’t recall anybody in Beaverton thinking or knowing about it, but it seems it caused quite a stir when some east coast customers opened the box from Ory-Gone. Back in those days, everyone at Tek was trying to be frugal.

This February 3, 1961 TekTalk article talks about their use of popcorn for shipping. Excelsior, as mentioned in the article, is also known as wood wool and is made of wood slivers used for packaging.

This cartoon appeared in the January 26, 1962 TekWeek. 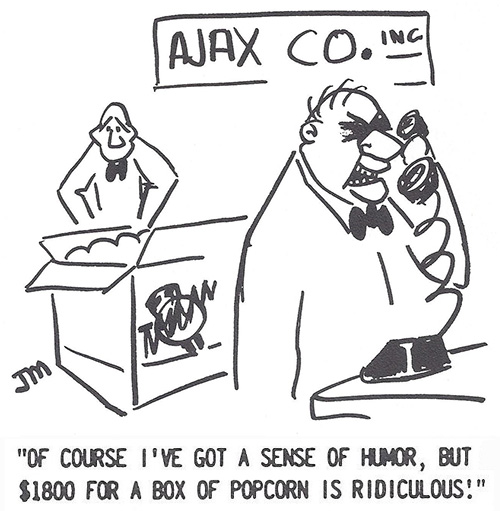 The way the story goes, the popcorn was in large bags hung from the ceiling in the shipping department. A woman was filling a box with popcorn when out came a dead rat.  After composing herself and being frustrated with the situation, she pickup up the "evidence" and marched over to Howard's desk but found him gone.  She left the rat along with a note that said something to the effect of "fix this situation or find me a different job". 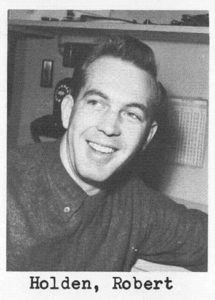 Click on the image to view the PDF of the patent. 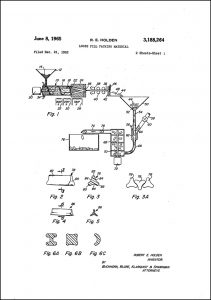 This May 1962 TekTalk excerpt indicates Dow Corning originated the process but Tektronix improved on it for its use as packing material.