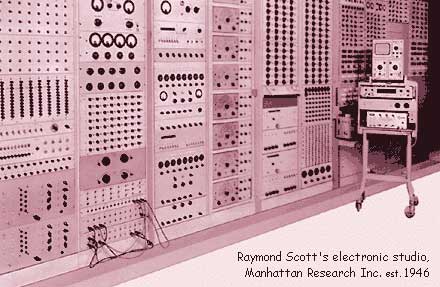 This 1963 album by Marty Gold and his Orchestra, Sounds Unlimited, features a Tektronix RM503 scope for the album cover.  The Tektronix bug was removed from between the power switch and the pilot light.  It is not electronic music so the scope was chosen for some other reason. 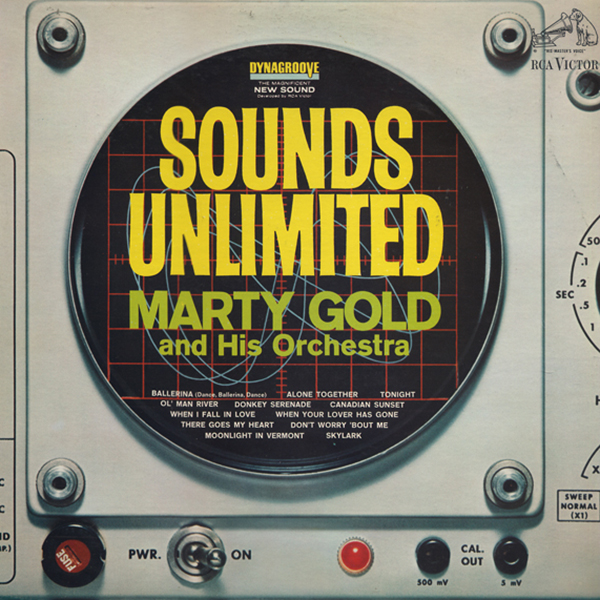 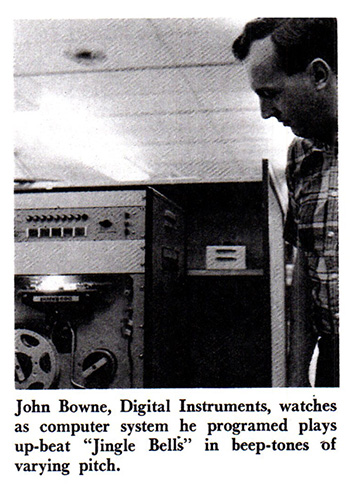 This 1974 sound check setup photo of the Grateful Dead "wall of sound" shows two Telequipment D54 oscilloscopes on the stage. 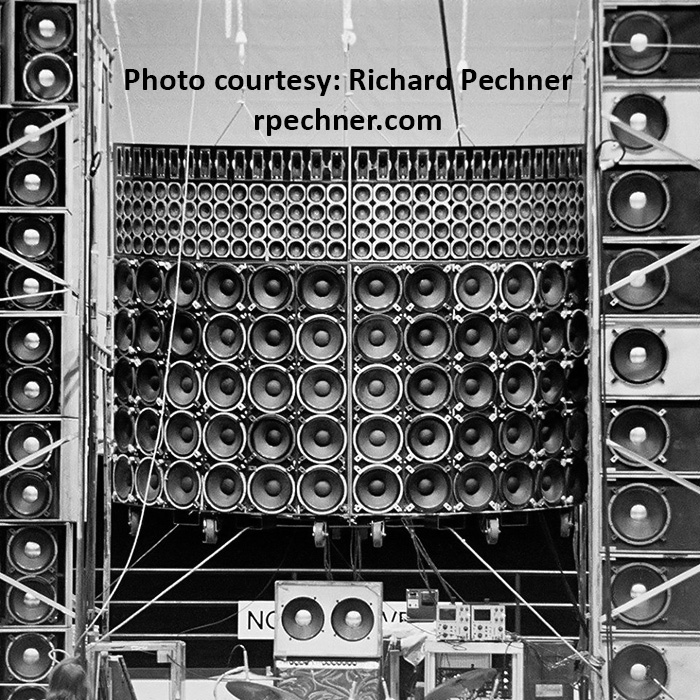 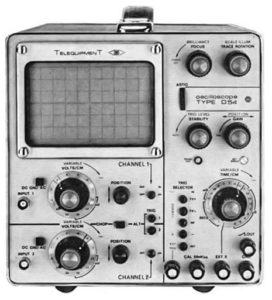 This photo is of a very clean D54 was sent to us from amateur radio operator and Tektronix/Telequipment collector Owen McConnel, VK6YBA, in Perth Western Australia. 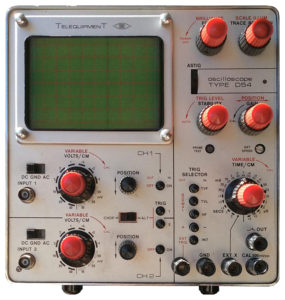 Iannis Xenakis was a composer, music theorist, architect, and engineer who pioneered the use of mathematical models in music.  These photos courtesy of www.lastfm.com show him with a 4014 DVST computer graphic terminal on the far right and his hand on a 4631 hardcopy unit.  Also pictured is a graphics tablet which were often used with the terminal in a computer-aided design system configuration. 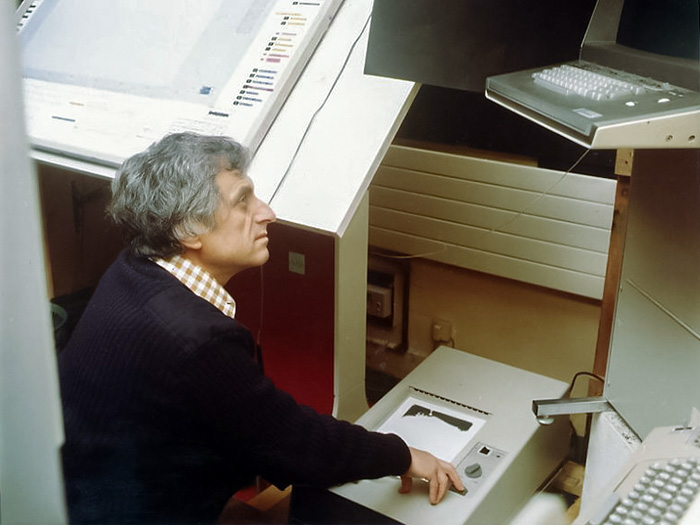 This photo shows the screen and keyboard of the 4014 along with a tablet controller on top. 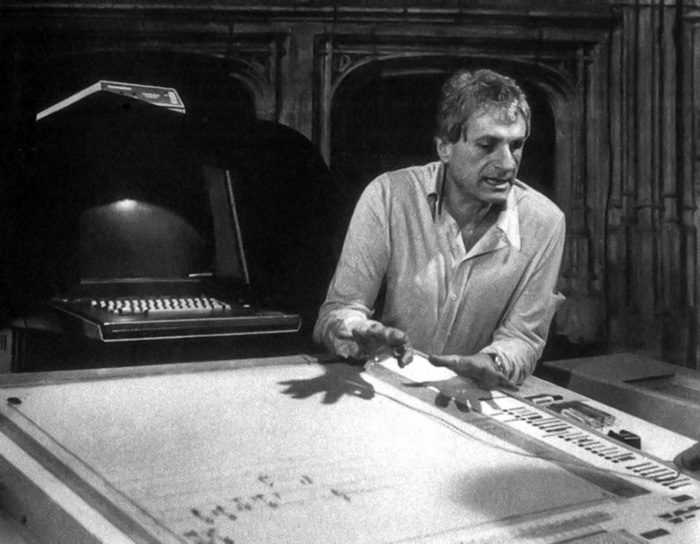 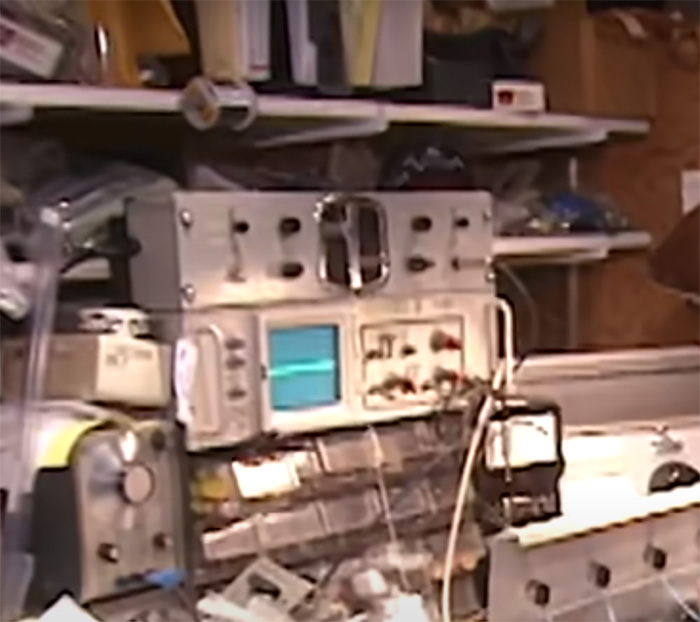 The EMS Synthi 100 was a large analogue/digital hybrid synthesizer made by Electronic Music Studios Ltd in the early 1970s. A total of 30 were built. It featured an integrated Telequipment D43R dual beam oscilloscope. 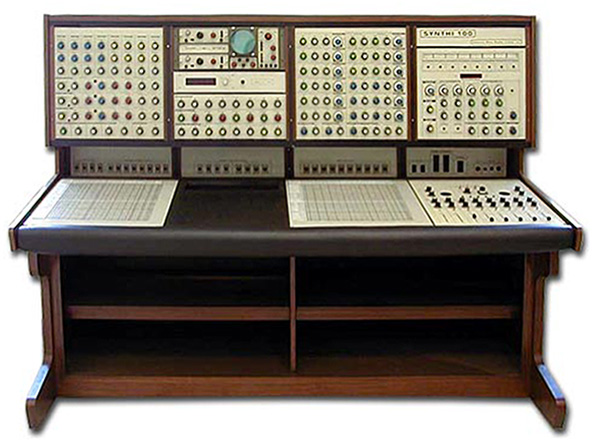 This excerpt from the December 1969 Telequipment catalog describes the D43R. 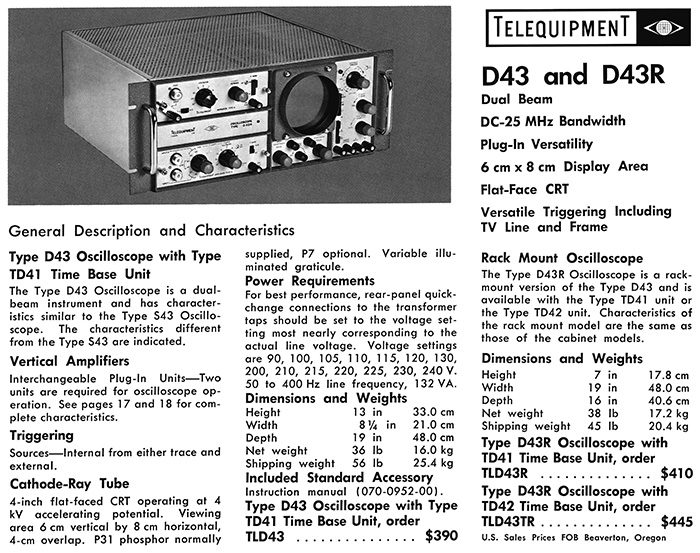 The following is an excerpt from William Kincaid Meets Spectral Analysis. Used with permission from The Absolute Sound, Issue 320.

Most flutists, 80% in one study, will tell you that the tone, or timbre, they produce is the most important aspect of their playing. There are two components that determine timbre, the attack—the short burst of energy that initiates the sound—and the steady-state phase that follows. For many, it’s the harmonic structure of the latter that’s of primary importance.

When Lois Herbine was a young teenager and taking her first lessons with a Kincaid scion, her engineer father analyzed her sonority with scientific test gear. “My Dad came home from work at Leeds and Northrup with a Tektronix 555 oscilloscope,” Herbine told me. “He hooked it up to the iconic Shure 55S microphone from the 1950s (better known as the ‘Elvis Mic’) and created a space for me to test my ability to add overtones to my sound with this visual support. Dad developed test equipment for work and was an inventor on the side, as well. I now believe the use of the oscilloscope to see sound production was a prototype but, for me, it was what you did at home on a Sunday when Mom wouldn’t let you watch TV. As my Dad was also a professional jazz clarinetist and saxophonist—and an amateur flutist—he had an idea of how to explain what to do with my embouchure to create the overtone series in my sound. I recall having a difficult time producing the third harmonic. But when I got it, I learned what that sounded and felt like.”

Mr. Bliss may not have been the first, but he was definitely ahead of his time. “Spectral analysis” graphs of a flute player trying out different techniques of tone production were published as far back as 1967, the year William Kincaid died. The objective investigation of instrumental or vocal tone quality took a big leap forward with the implementation of Fourier analysis. When a Fourier transform (FT) algorithm is applied to a musical signal, the graphic representation is mathematically converted from the time domain to the frequency domain and the harmonic makeup of the sound under study is clearly demonstrated.

While not specifically Tektronix oscilloscopes, the Oscilloscope Music website is worth checking out.  They have a demonstration album available in vinyl, mp3, and flac that draws interesting images on a scope in XY mode.  We have a demonstration exhibit of music in XY display at the museum.  By the way, the album cover requires red/blue 3D glasses to view properly.