Oscilloscopes generally have an XY mode.  Analog oscilloscopes show XY displays in real time where digital oscilloscopes have to acquire the signal and then display the data so generally are not as good.  Our demonstration board draws the Wizard, Tek Bug, and Tennis in XY mode.  Alan Wolke has a nice tutorial #288: Comparing XY Mode on Analog and Digital Oscilloscopes.

Oscilloscopes have been used to display stereo signals in XY mode for decades.  During the 1970s and 1980s many famous stereo component manufacturers sold an oscilloscope as part of their component system.  The oscilloscope would be used to display stereo, 4 channel, and FM multipath signals.  Tektronix made a 760A stereo audio monitor which was used in broadcast facilities to monitor the quality of the audio signals.

Jerobeam Fenderson at oscilloscopemusic.com has developed some great music that displays fantastic images on an oscilloscope in XY mode.  We have an oscilloscope music exhibit at the museum which plays a number of his compositions. 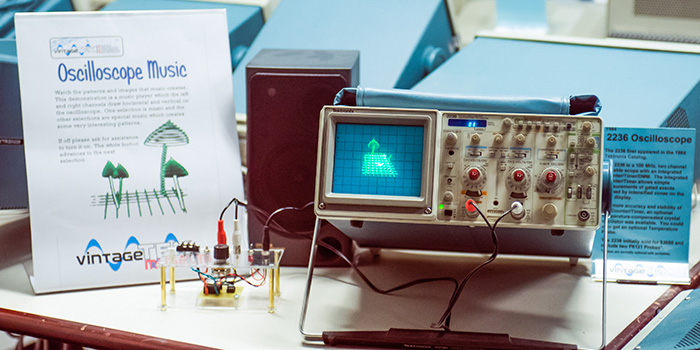