MESA Day (Math, Engineering, Science Achievement) is an annual engineering, math and science competition that provides an opportunity for each student to design and build projects, win medals, learn by doing, visit a college campus, and interact with each other.

It is sponsored by Oregon MESA which is a pre-college academic program hosted by Portland State University that equips underrepresented students with STEM (Science, Technology, Engineering and Math), invention, and 21st-century skills.

Tektronix' involvement with Oregon MESA (then Portland MESA) goes back nearly 35 years to 1985. Tektronix supported the initial stipends for teachers to run MESA from 1985-1990. Their total contributions amounted to $154,000 during this period, comprising nearly 80% of all corporate donations to MESA. In addition, Sal Kadri, GM of Accessories Division at Tektronix, served as a founding advisory board member and Tektronix provided numerous volunteers. Without Tektronix, Portland MESA would not have been able to get off the ground and grow from a program serving a handful of schools in Portland Public Schools to today where Oregon MESA serves over 700 students across 13 school districts in four counties.

The vintageTEK museum participated in MESA Day on May 20, 2022 as an Inspirational Sponsor and an exhibitor. Our logo was featured on the T-Shirts and throughout the event. 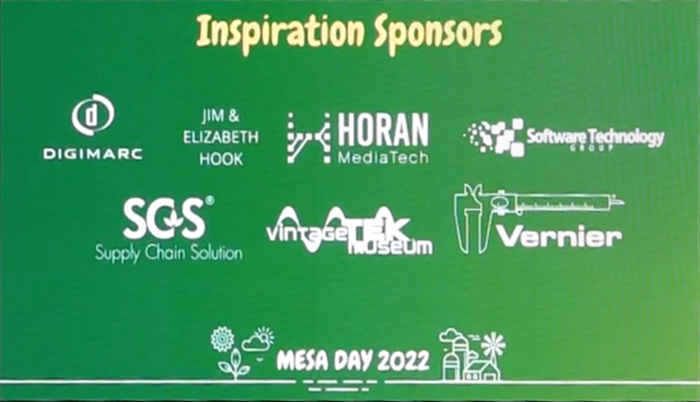 We also supplied flying discs with our logo for the students to enjoy. 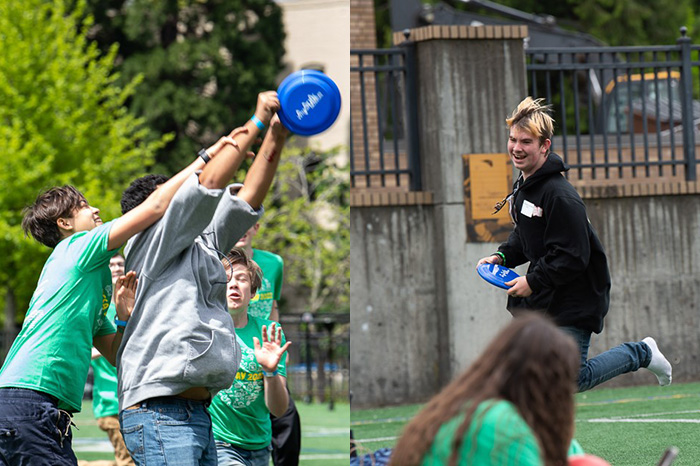 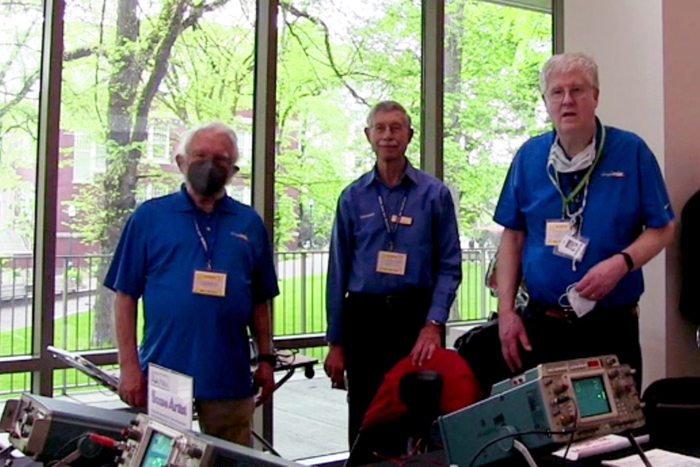 The exhibit consisted of the 1502 Time Domain Reflectometer, and our hands-on Scope Artist, Demonstration board with table tennis, and Time of flight exhibits. 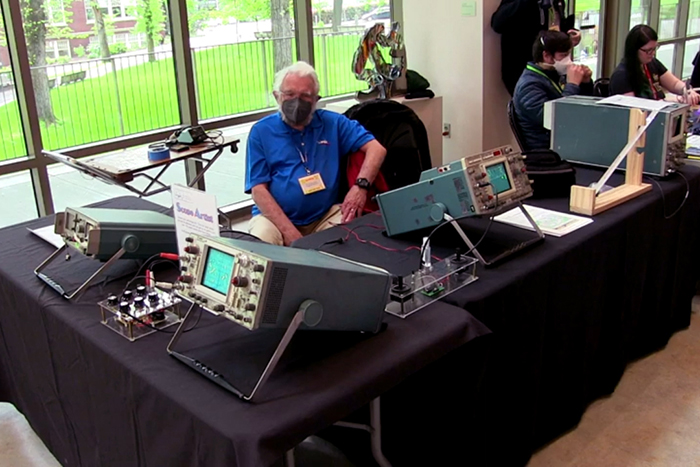 Over 200 students attended and the booth was quite busy. We ran out of flyers for our Instrument Library so we are hopeful of more loans. We also were approached by two high schools needing training on the use of their oscilloscopes. 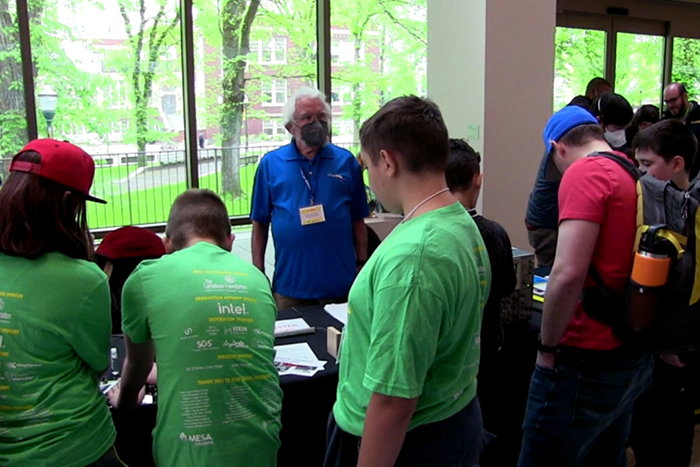 2020 is the 35th anniversary of MESA and vintageTEK is proud to be a Silver Sponsor for their 35th Anniversary Birthday Bash fundraiser and Gala.  - cancelled due to Covid 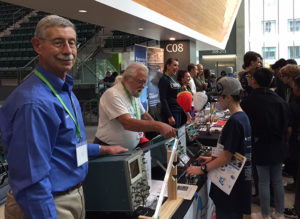 The booth featured three exhibits: our demo board where contestants play table tennis against each other, Scope Art which creates dazzling displays using knobs and switches, and our Time Of Flight which measures the speed of a marble down a chute using 7633 storage oscilloscope. 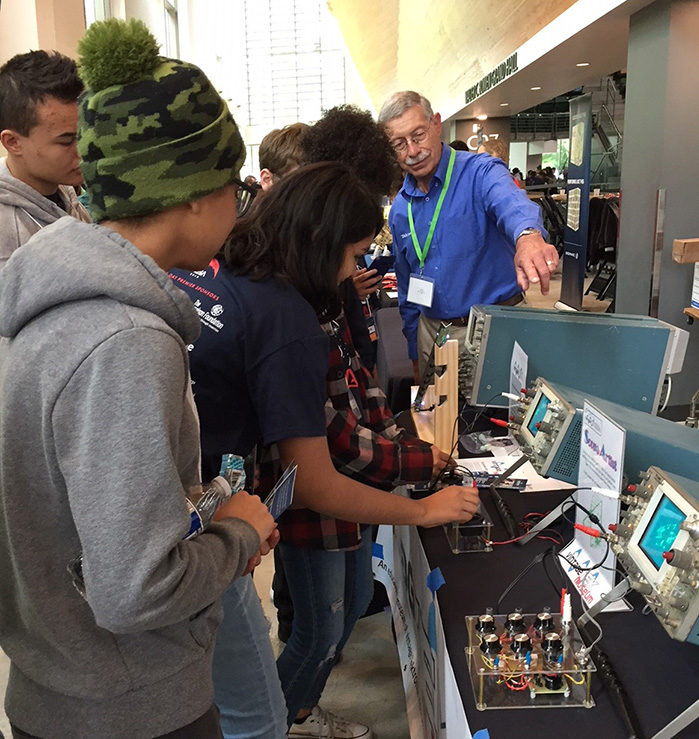 The vintageTEK museum participated in MESA Day on May 16, 2017 with a remote booth. Volunteers Dave Brown, Bob Haas, and Tom Goodapple staffed the event with three hands-on exhibits. 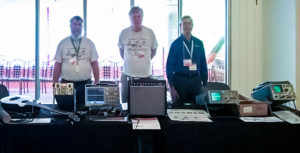 The booth featured three exhibits: an oscilloscope to view various waveforms from a function generator, a log struck with a hammer, and a guitar, an oscilloscope and amplifier to view and hear the sounds of a music synthesizer, and our demo board generating images of the Tek Bug and Wizard. 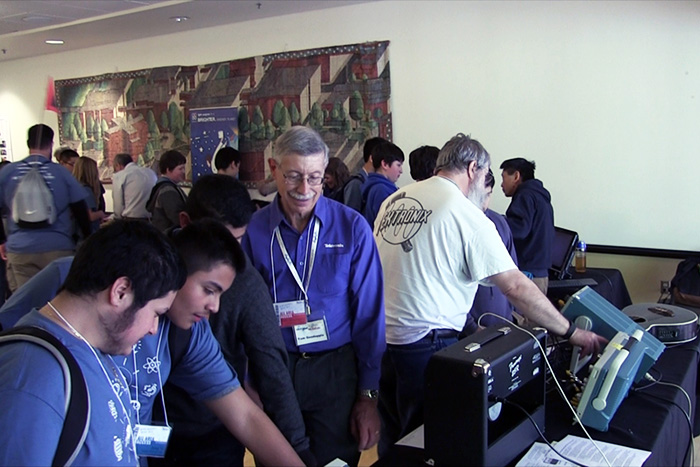