Tektronix had Display Cruisers in the 1970s and early 1980s to exhibit its products regionally.

In North America Tektronix would inform the Sales District the cruiser would be in their area for approximately 2 weeks. It was up to the Sales Engineers to set up locations for the bus to visit. For major companies the bus would park in a central location and would stay on site most of the day. In smaller territories the bus would cover 2 or 3 companies in one day.

The program started with the 35 foot bus as featured in this June 6. 1975 TekWeek. Click on the image to view the PDF. 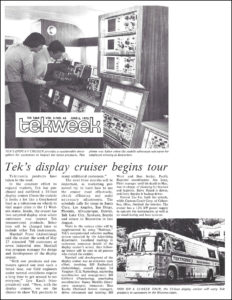 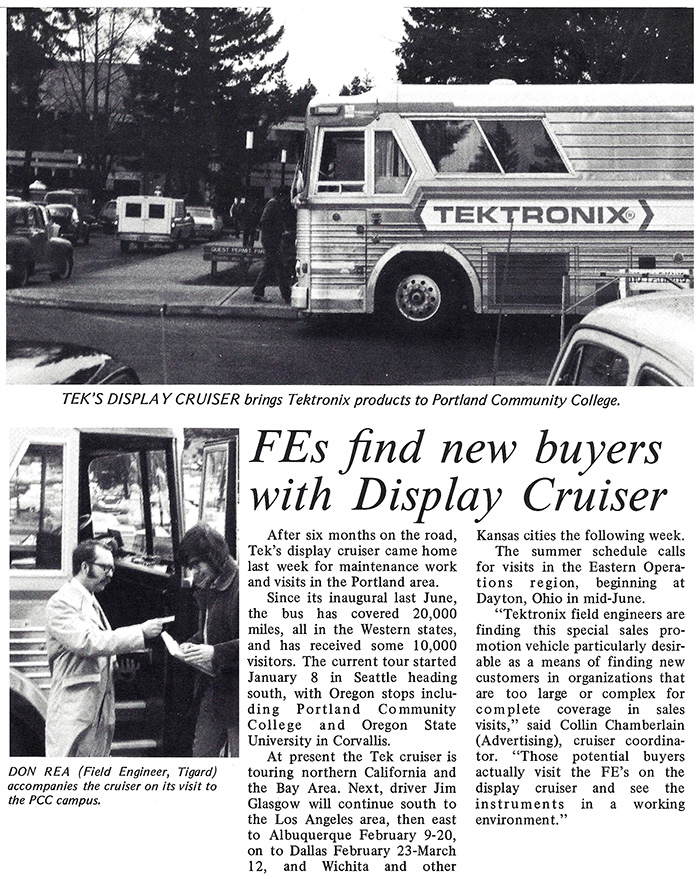 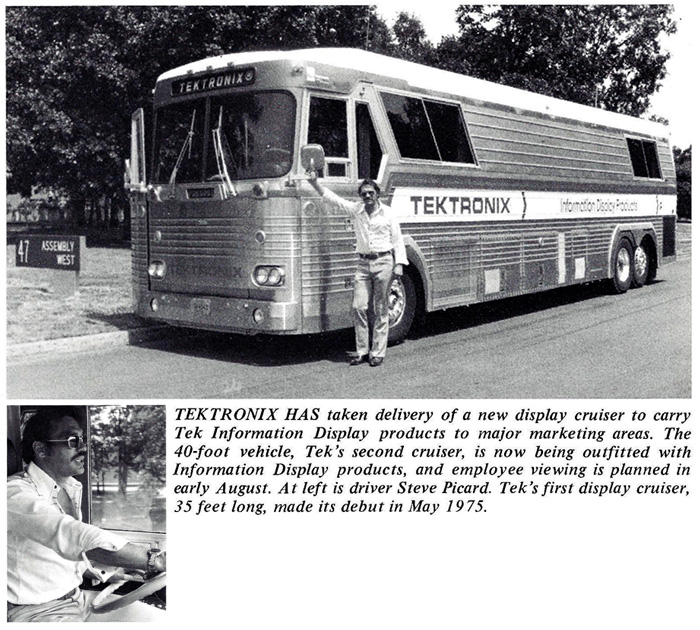 Later two additional 40 foot buses were added, one dedicated to Information Display products (IDD) and the other to Test & Measurement products. The IDD bus traveled the entire US. For Test & Measurement, the 35 foot bus toured the eastern United States and Canada and the new 40 ft bus toured the western United States and Canada. Display cruiser drivers were typically assigned to the program for six months and afterwards they were expected to be hired by a District Sales Manager.

This August 10, 1979 TekWeek features an article on successful month tour of Alaska. Click on the image to view the PDF. 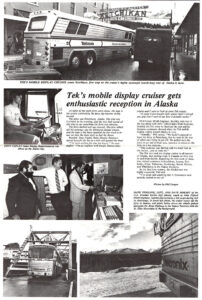 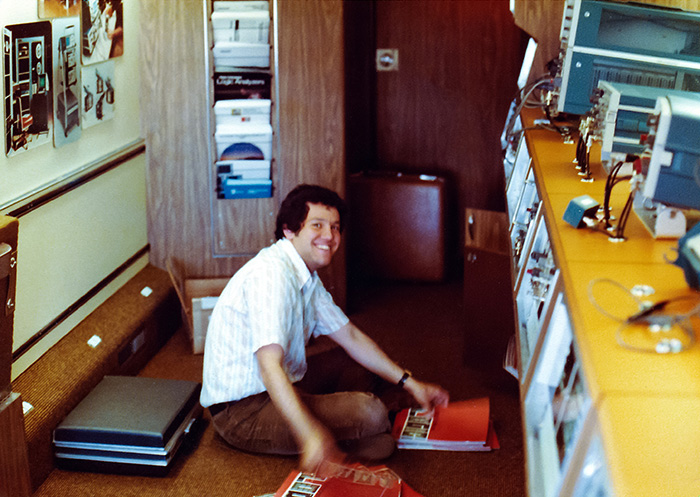 This photo is of Horace later in 1984 with the 40 foot Test and Measurement Cruiser he drove in the western United States and Canada. 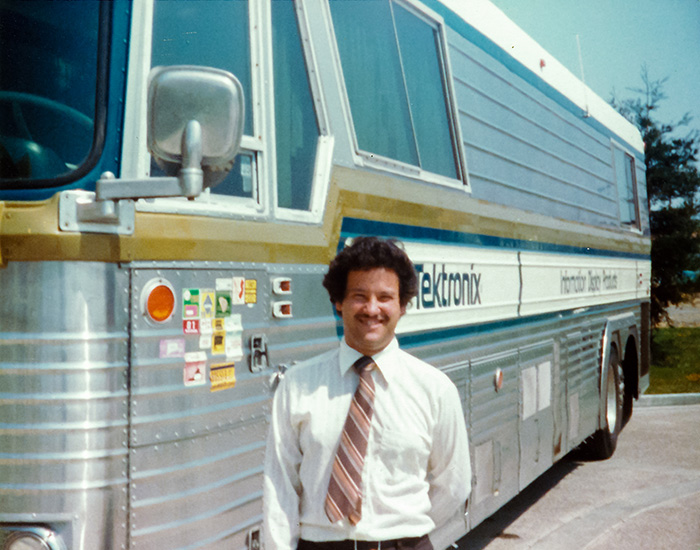 This photo is of Horace and Bob Landgraf in 1984 with the 40 foot Information Display Cruiser. 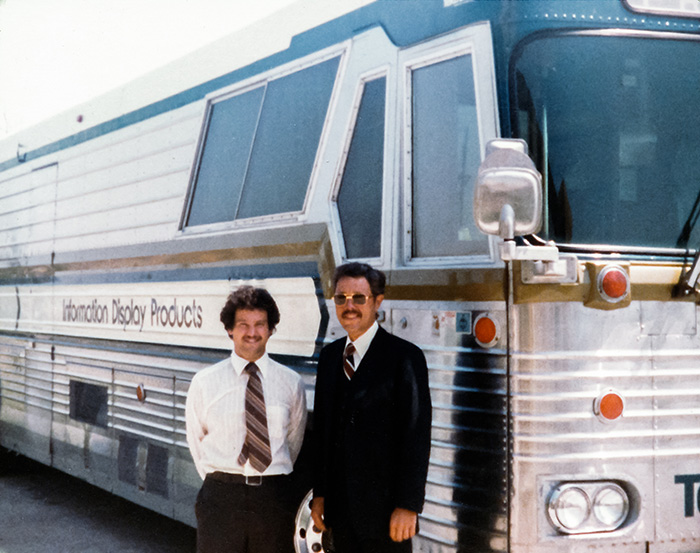 Horace cited the personal benefits benefits as "For me the best part of the program was demonstrating the products and learning sales techniques. When I was hired by Tek I had no sales experience. At the end of those 6 six months I was fully trained on all products and really knew all the feature and benefits."

Display cruisers were also used to cover Europe, Scandinavia and the Middle East. This article in the March 1, 1974 TekWeek features the European cruiser program. Click on the image to view the PDF. 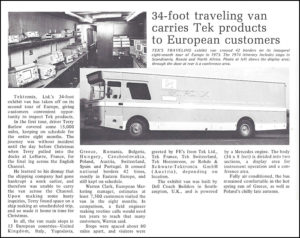 This photo shows Patrick Hillion who drove this cruiser in Europe. 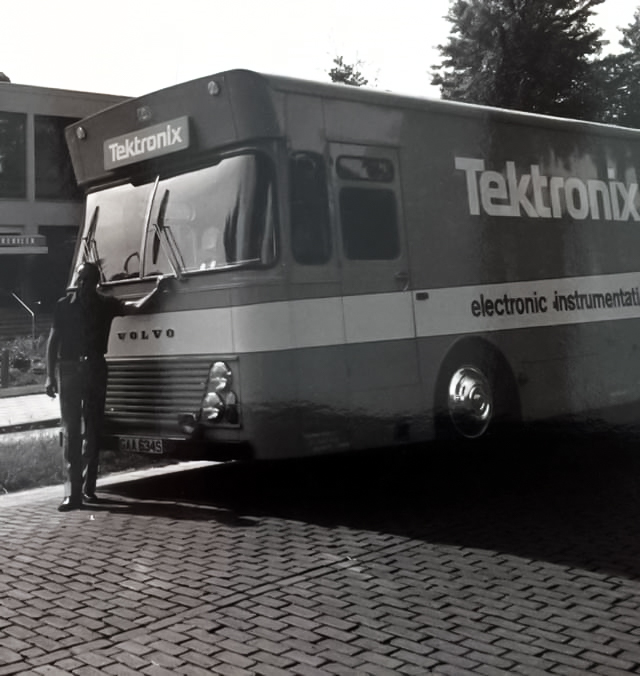 This October 1974 Tek Topics describes the cruiser driven by Terry Barlow in Europe. Click on the image to view the PDF. 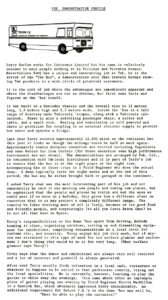 This photo shows a display cruiser at Heerenveen. We do not know who the individuals are. 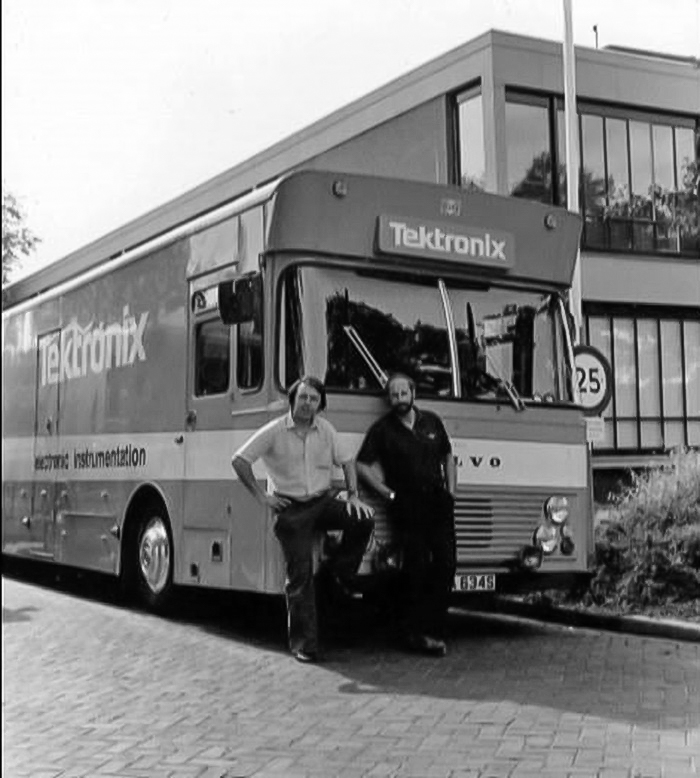 We do not know the location in Europe or individuals in these next three photos. 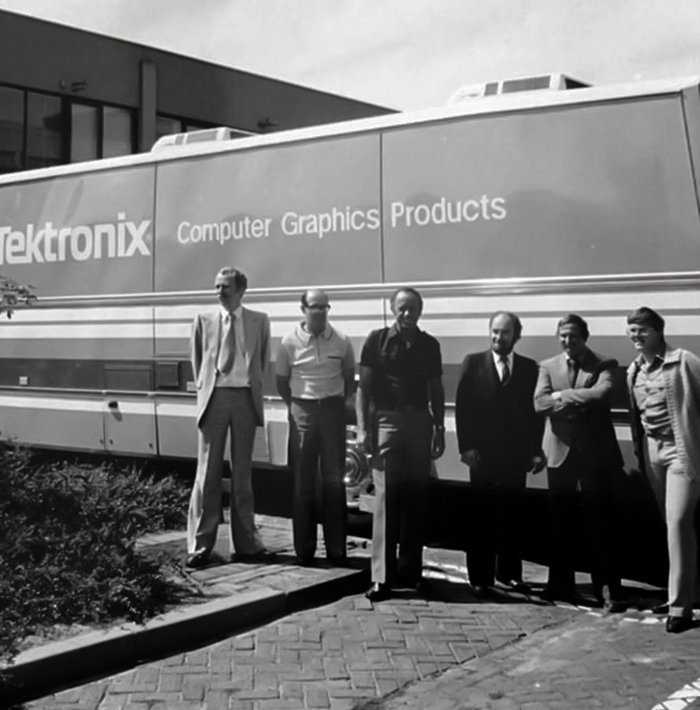 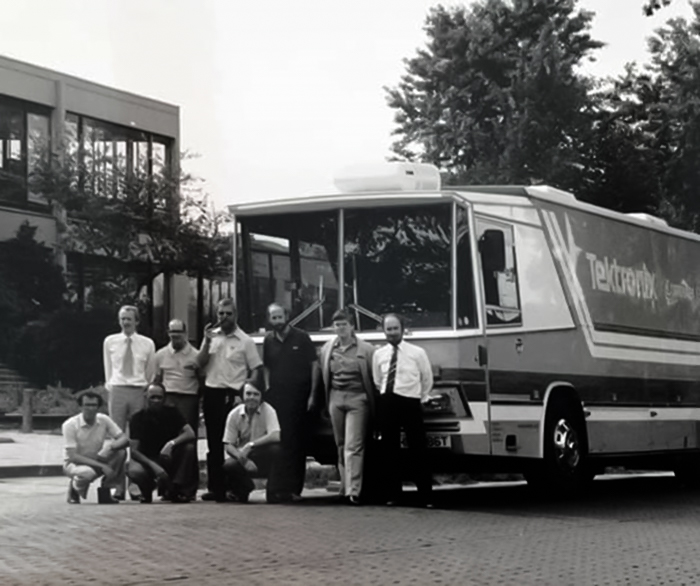 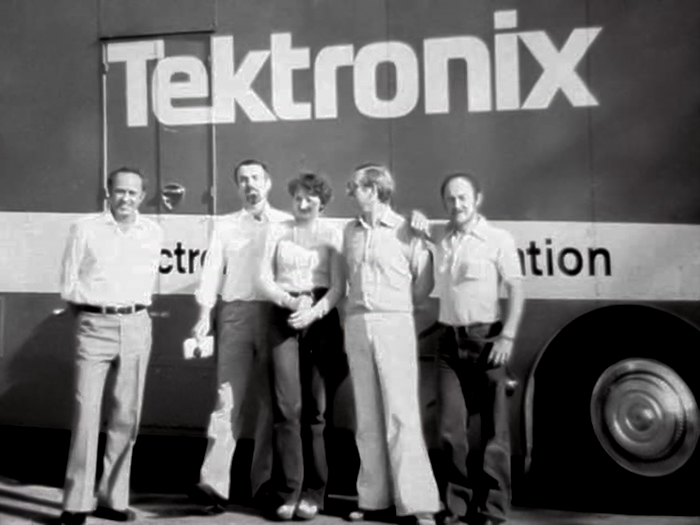 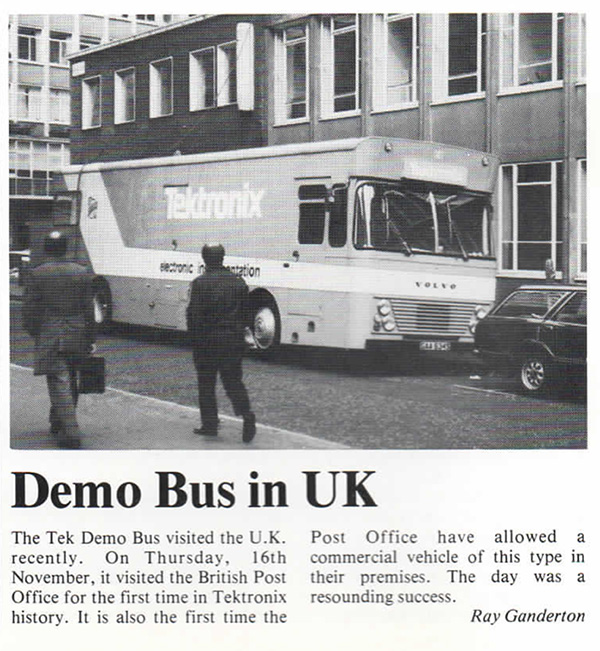 This March 1980 Tek Times has a couple of photos of the Computer Graphics display cruiser. 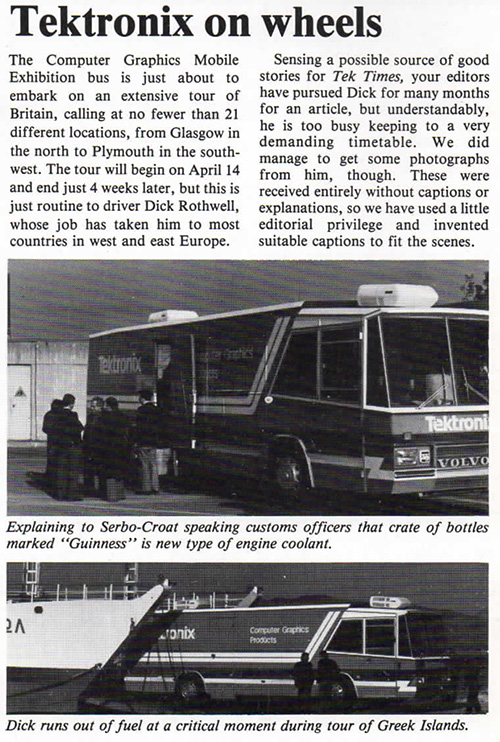 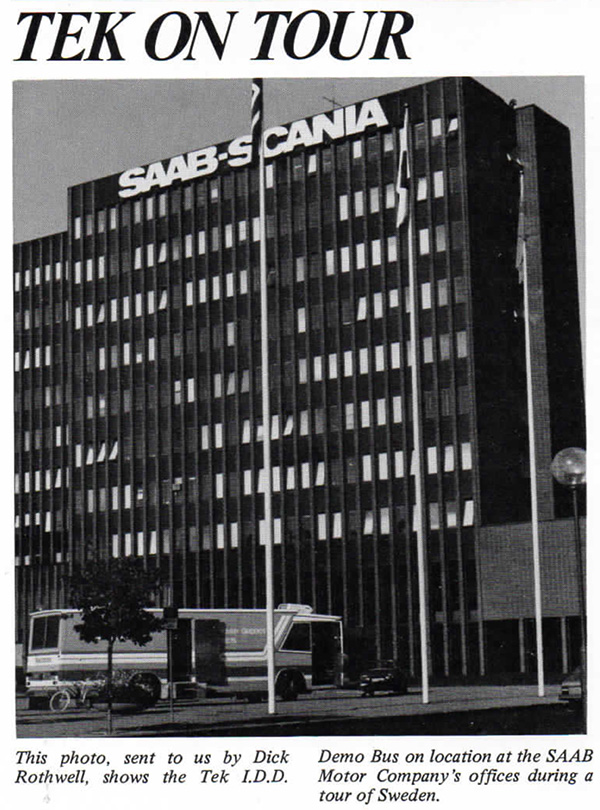 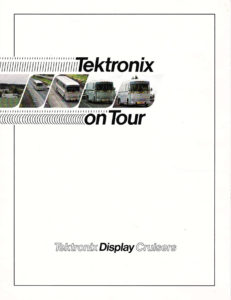