In honor of Tektronix 75th anniversary the museum created 75 pages with historic photos and information. The PDF may be viewed on our 75 Pages Celebrating Tektronix' 75th Anniversary page.

We also created a three part video slideshow tour on 75 of our exhibits.

Click here to view a PDF of the video slides. 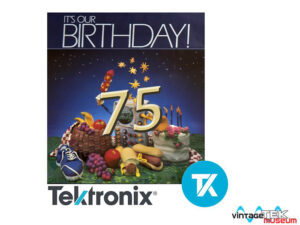 One of the earliest documents we have is the Tekrad Articles Of Incorporation filed on January 2, 1946. Click on the image to view the PDF. 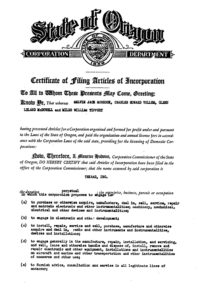 This Supplemental Articles of Incorporation filed a month later on February 4, 1946 changes the name from Tekrad to Tektronix. Click on the image to view the PDF. 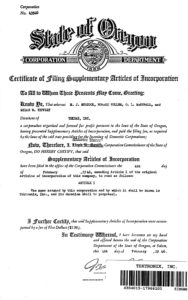 This February 11, 1986 article from The Oregonian describes Tektronix as "seeding" the Silicon Forest and provides insight into the early practices of the company. Click on the image to view the PDF.

There are several books, documents, web pages, and a video describing the early history of Tektronix. 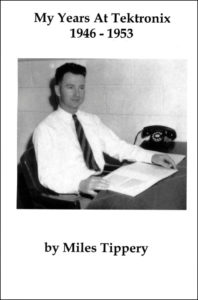 Miles Tippery was one of the four founders of Tektronix and worked only 8 years until 1953 when he had to leave due to health issues.

Miles wrote an autobiography of his life and donated a portion to the museum which we have printed as a 326 page book "My Years At Tektronix 1946-1953".

Since this book is part of his autobiography, the early history of Tektronix is interwoven along with stories of his life, building his house, and his various hobbies and interests. The Tektronix portion is a unique glimpse into the early history of the company and the founders. It contains information not included in the 40th anniversary book and is available in a soft bound book or PDF on CD on our eBay store.

Our page on Hawthorne Electronics describes the early days of Tektronix at this facility with photos and a May 26, 1989 issue of TekWeek which features seven employees who started at the Hawthorne site who are still at Tektronix.

Wireless World published an article in their September 1955 issue with an overview of Tektronix and a review of the 517 and 535 oscilloscopes. Click on the image to view the PDF. 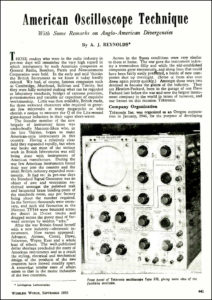 This January 10, 1956 TekTalk article summarizes most of the Wireless World article. Click on the image to view the PDF.

This memo from Jim Castles to Byron Broms, dated November 16, 1965, details some of the backup data for the Security Exchange Commission on Tektronix claim as "the world's largest manufacturer of precision cathode ray oscilloscopes". It contains some interesting information about the size of the market, company market share, and competitors. Click on the image to view the PDF. 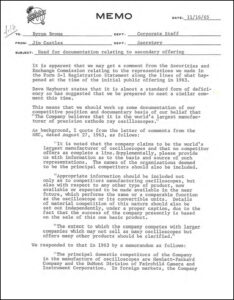 The 249 page document "On The History and Environment Of Tektronix" was completed in October 1978 and contains biographies and early history of the company. The introduction explains it as "Some basic information about Tektronix history, instrument concepts, technology, and some overviews of related industries, important customers, and key competitors. This volume contains basic information about the history and environment of Tektronix. It was prepared jointly by the Management Development Department and the Marketing Information and Research Department for use in management development programs at Tektronix. The materials are intended to acquaint new middle managers with basic factors and forces that have shaped and are shaping Tektronix. They are meant to be used in a class or other discussion format. The materials reflect a Tektronix commitment both to long-range planning and to involving middle managers in discussions of the nature, values, and prospects of the firm."  Click on the image to view the PDF. 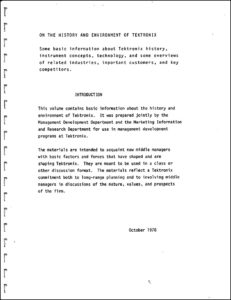 On Thursday, May 1, 1969, Don appeared before the Subcommittee on Foreign Affairs to testify on House Concurrent Resolutions 85 and 86 to terminate foreign direct investment controls. His testimony contains interesting history on sales and international operations during the 1960s. Click on the image to view the PDF of his testimony. 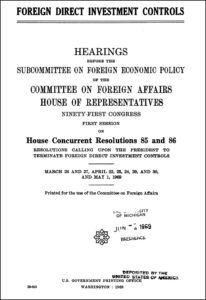 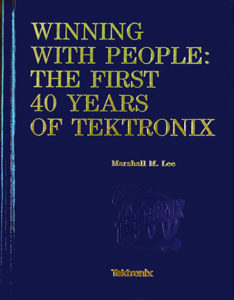 In 1986, as part of the 40th anniversary of Tektronix, Marshall Lee, a Pacific University professor, completed and published his book "Winning With People: The First 40 Years Of Tektronix".

This book really began in the spring of 1982, when Tektronix asked Marshall to take a look at all the "stuff that had accumulated over the years and which might be of some historic value."

This 329 page book is the definitive history of Tektronix. The museum sells limited copies of the original printed book or a PDF with a full index on CD on our eBay store.

We have several articles and documents regarding early history.

Ideas That Have Built Tektronix

We have pages on each of the three founders of Tektronix that provide insight into the early history of the company.

We also have pages on other early employees.

More employees can be found on our Employees page.

These stories written by former employees describe the early history of the company. The complete list of stories is on our Employee Stores page.

Another Tek History, by Anonymous

The Tektronix Spirit video was produced for the 50th anniversary celebration and is on our Video Gallery.

Oregon Public Broadcasting (OPB) also produced a 30 minute documentary "The Spirit of Tek" in season 4 of "Oregon Experience". It may be watched on-line and is quite good. We also sell this DVD on our eBay store.