This story about Paul Shefchek was written by Hale Farley.

Paul was born November 2, 1938 in Tacoma, WA and his family moved to Vancouver WA at an early age. He was a quiet individual but worked well within a group. I think he grew up learning about electronics at school, maybe Portland State. He joined Tektronix in 1966 at the age of 28 and worked until he retired 33 years later. I believe his first five years at Tektronix, he worked in Beaverton. About 1972 he was working on the product later designated R7912 when he was approached to become a field technician assigned to Mountainview, California Field Office. His major responsibility was the R7912, yet he worked on other products as well. There are untold numbers of support personal in a company like Tektronix. Seldom are they recognized for the important work they do. Paul was one of these.

During the introduction tour of the R7912, the second site was Nuclear Science Symposium at Sheraton Palace, San Francisco. Scientist and engineers from around the world attended this conference both for sharing research information and learning about the latest measurement instruments. The R7912 in the exhibition booth included a PDP11/23 computer with magnetic memory and a magnetic tape drive for loading the software (WDI Tek basic), 4014 and 4610 as well as a pulse generator for the five nanosecond pulse. The computer software was loaded in Beaverton before going to the trade show on the East Coast. As back up a separate PDP11/23 was part of the trade show equipment. I did not need to re-load the software so loaned the spare PDP11/23 to EG&G, since theirs was down. This information beat me back to Beaverton.

There were several Tektronix personal that came to the West Coast introduction. I was on my seventh week with the company so did not know many of Tektronix individuals, but I believe one of the Tektronix members was Paul. He was interested to see the product, which he had a part in developing and how it could be used to measure laser pulses, other single shot events, and support of nuclear experiments. Several companies stopped by the booth to see the R7912 such as Lawrence Livermore Labs (LLL), Sandia National Labs, Stanford Research Institute, and other Silicon Valley companies. A review of the company phone books has Paul at Santa Clara and Concord field offices, California until 1999. A side story is Walter LeCroy from LeCroy Research stopped by the booth. His company had a 20 point digitizer. After seeing the R7912 demonstration his bald head became very red because he knew his product was dead.

Paul lived with his wife and two daughters in Fremont. This location was located about half way between the Santa Clara Field office and LLL. LLL wanted to have the R7912’s repaired on site in Livermore. Paul had a security clearance by this time so he became the service person to satisfy this service contract. There was a lot paper work to move R7912’s out of LLL, since it is a secure area. The R7912’s were so critical to their mission, having one gone for four to six weeks for calibration was un-acceptable. Paul could turn one around in one day.  This brought about setting up the test bench at LLL with the complete service test kit only available in the plant and service centers. This included a product Tektronix used internally to calibrate the R7912 (067-0679-99). I am not sure how Paul was able to get a second unit for his test bench in LLL, but he did.   I believe Paul continued this contract well into 1990’s. This is just one of the many ways Paul supported a site which had several R7912’s.

One attribute of the R7912 was the silicon target could have defects. LLL would not allow more than two defects in the cathode ray tube (CRT). The software could not fill in the missing data points for more than two defects. When Paul needed to replace a CRT, he needed to know there were two or less defects. Most often the factory did not specify this attribute of the CRT so frequent shipments from the factory would include more than was requested. 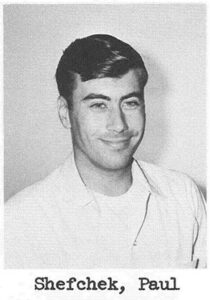