This unique 7A26 is not part of the museum exhibit but was brought into the museum by the owner Tom Rousseau.  It is the 100,000 7A26 Dual Trace Amplifier plug-in produced and was built with a special gold-plated panel and presented to him. 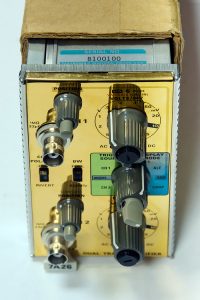 Tom recognized that the left/right mirror symmetry of the 7A12 front panel could be improved considerably. This symmetry requires two unique PC boards which are mirror opposites of each other. That led to extra inventory, assembly problems, and unreliable attenuators. Tom showed that a top/bottom arrangement saved space, cost less to manufacture, required fewer parts, and would be easier to repair.

Management did not ask Tom to do the 7A18, He just did it and then took the concept to management. That was one of the great things about Tek back in the early ‘70s … an internal entrepreneurial spirit! The 7A18 had physical characteristics that proved the benefits of over/under layout. It was a huge improvement from a manufacturing, reliability and value point of view over the 7A12. It was followed by the 7A15A and PL-1186 in 1973. After the 7A18 was completed, Tom came up with the idea to extend the physical concept to a higher bandwidth, hence the 7A26 and 7A16A. Given the intrinsic bandwidth of the 7A26 without the input FET impedance converter, a 50 Ohm version could also be made with much higher bandwidth, hence the 7A24 and 7A25. The 7A25 did not make it into production. The 7A24 and 7A26 were introduced in 1974.

Tom’s initial plugin resulted in these plugins based on the simpler top/bottom layout of the 7A18: