The 160 series was a set of modular "bolt-in" instruments introduced in 1952 and was in production until 1970.  It was a precursor to the TM500 series of modular plug-in instruments and was designed to provide timed pulses of adjustable duration and amplitude.  The 160 series consisted of separate instrument modules with a common power supply.  The 125 would power a single module while the 160/160A would power 6 modules.  The 160 series modules consisted of a Type 161 Pulse Generator, Type 162 Waveform Generator, Type 163 Pulse Generator, and a Type 360 Indicator.  In addition the Type 122 Preamplifier was often used and the later version had the same form factor as the 160 series.

The 160 series was designed by Dick Ropiequet.  This description comes from the "Winning With People: The First 40 Years Of Tektronix" book.

"Initially, Ropiequet worked on medical instruments which Tek was developing for the University of Oregon Medical School. These instruments, which were intended for use in the continuation of the work done by Dr. Tunturi on the nervous system, proved successful enough to warrant going into production. Eventually they appeared as the 122 Low Level Pre-Amplifier, the 160 Power Supply, the 161 Pulse Generator, and the 162 Wave-Form Generator, all of which found numerous research applications."

The modularity enabled many different configurations which led to the 160 series to be used extensively in biological research. This May 1952 TekTalk article describes how the 160 series was developed. 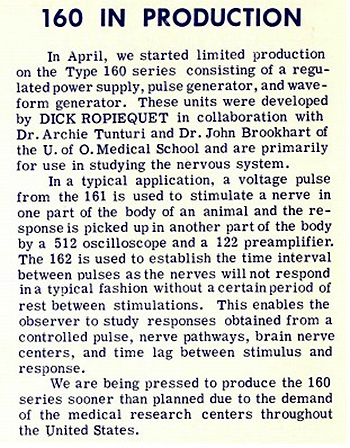 This excerpt from the 1953 catalog details the 160 series instruments. Click on the image to view the PDF. 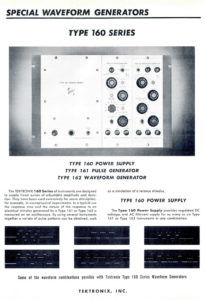 The museum has this configuration on display. 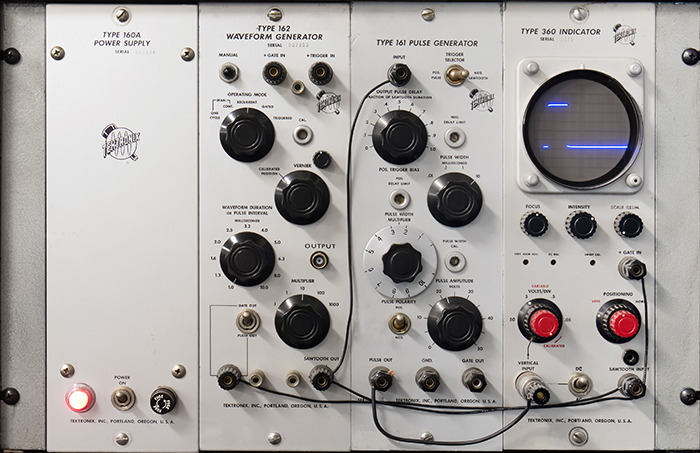 The November 19, 1962 TekTalk featured Electronics and Medicine. This extract describes the use of the 160 series at the University of Oregon Medical School. 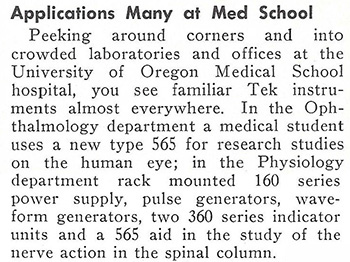 The complete Electronics and Medicine issue can be viewed by clicking on the image to view the PDF. 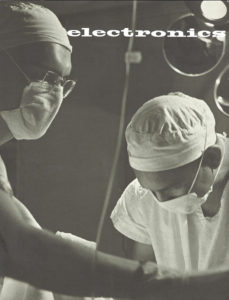 This 7 page extract from the Instruction Manual shows some of the configurations that can be setup with the 160 series.  Click on the image to view the PDF. 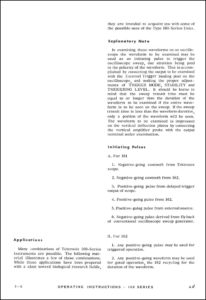 The 360 was designed with a paper phenolic PCB but later changed back to ceramic strips.  This two sided 360 PCB used eyelets which proved to not be reliable due to thermal expansion issues. 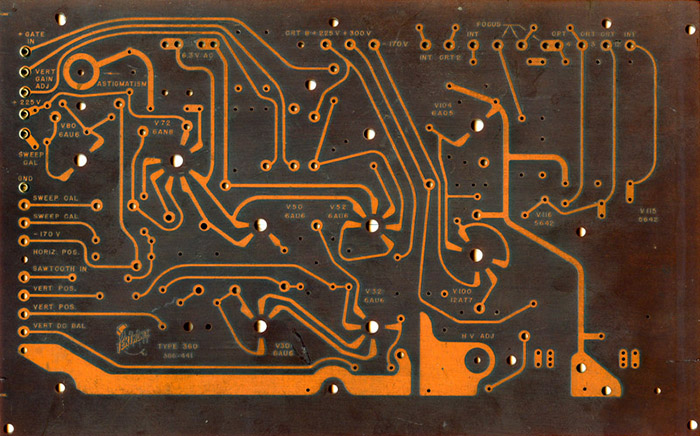 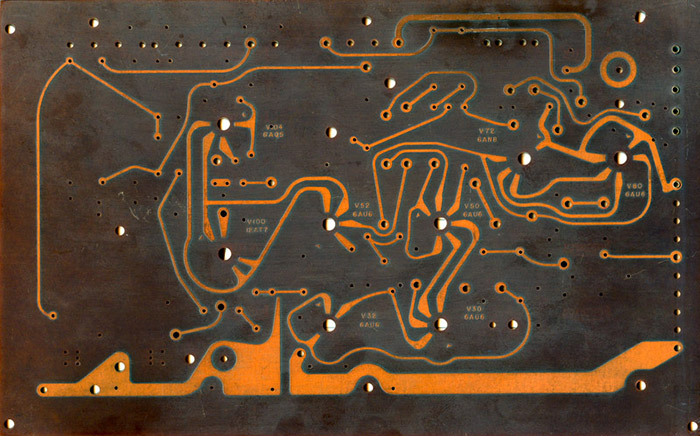 This is a composite image showing both layers superimposed. 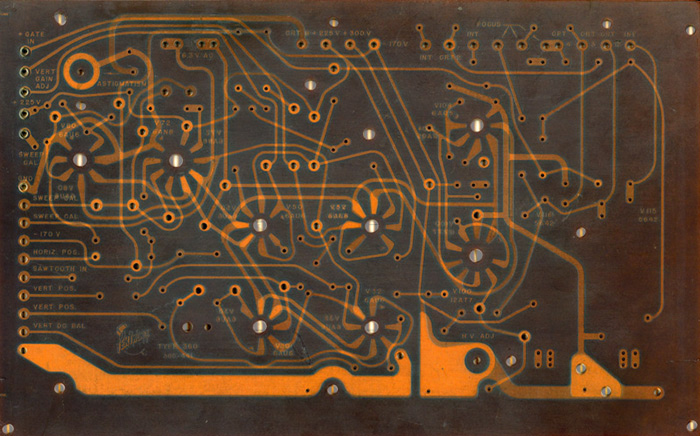 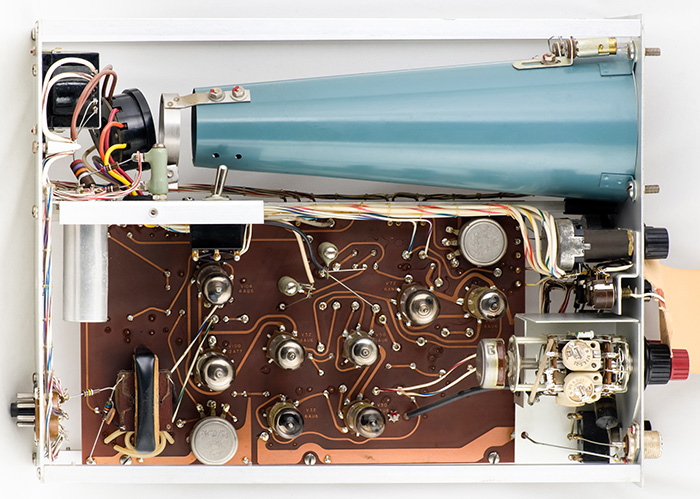 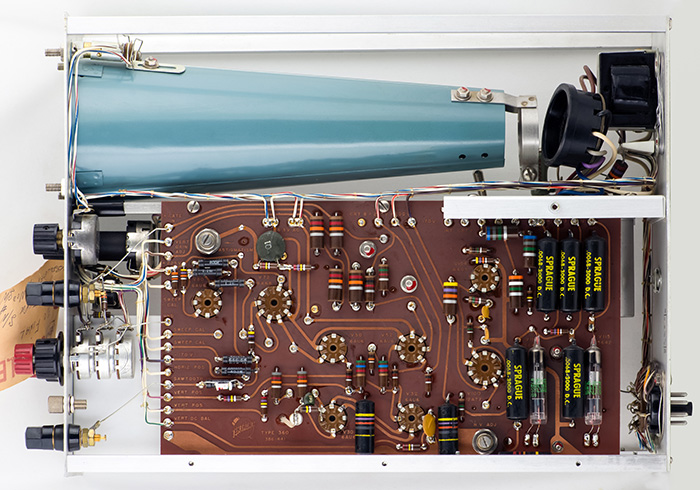 More information on early PCBs can be found on Tektronix First PCB page.

We have a Tektronix Printed Circuit Boards 1969 video on our Video Gallery.

This article on early PCB fabrication appeared in the November 10, 1955 TekTalk. The Printed Circuit Department consisted of a single employee, Don Olson. 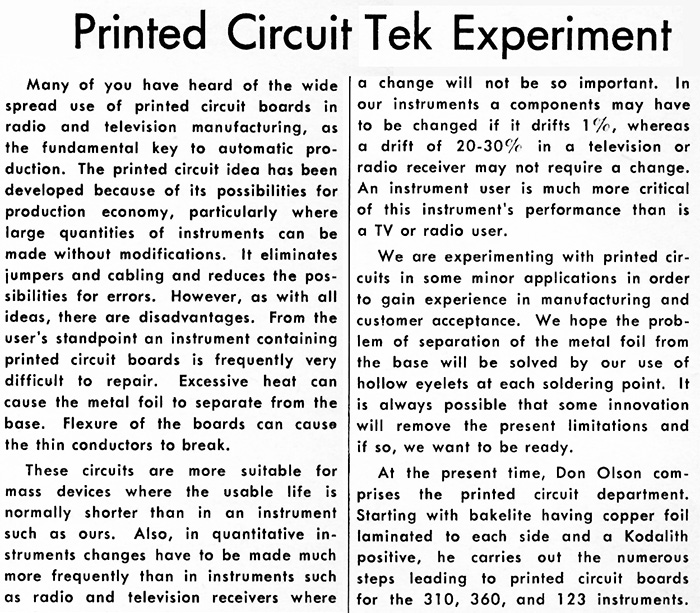