In addition to a quote from Einstein the cover showed a photomicrograph of flame-sprayed aluminum created by the Tektronix electron microscope which was never productized. Note the 20 micron scale bar.

In addition to recognizing the usual holidays and trade shows such as NAB, IEEE, Westcon, etc, in an unusual display of apparent political commentary August 9th was called out accurately as the day "Nixon leaves office" (he did so in 1974). There apparently was a grateful Democrat in the printing office. 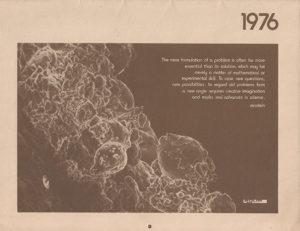