Dave was part of the three engineer firmware team on the 468.

GE Medical
The customer said it had artifacts when in Envelope Mode that clearly showed that the oscilloscope was broken and they intended to return a large order. To better understand the issue and hopefully save the order, several of us traveled to their facility where they were developing a new X-ray machine. As part of their certification process, a series of measurements of the high voltage system was done. They showed us what the waveform looked like when using the 468 as an analog 465 and then switched over to Envelope Mode and demonstrated that the scope was showing these glitches, insisting that the 468 was broken because "We've never seen these before at all using any other scope." We then explained exactly how Envelope Mode worked and why they wouldn't have been able to see those particular glitches even on a very good analog scope. Our presentation ended by saying, "That glitch has always been there but before now, you just couldn't see it." It was one of the proudest most satisfying moments in my career watching the light go on in one of the engineer's eyes and I remember him saying "You know maybe that's why ...". I don't remember the rest as it was all related to the internal workings of their X-ray machine but the entire rest of GE team immediately became engaged in an animated discussion concerning a long time issue they'd had with some unexplained behaviors and for which they now had a solid explanation, totally ignoring us Tek guys as we just smiled. Perhaps that is why GE Medical proceeded to buy a lot more 468s!

468 Public Reveal
The first public showing of the 468 occurred at one of these big exhibitions in Anaheim California in May 1980. I remember that day because the team flew down on 18 May 1980 which is the day that St. Helens blew and we could see the massive ash cloud from the air. At the convention center, most of the engineering team was banned from the Tektronix booth because we only had our rarely worn 2-piece suits. Only the project leader, Bruce Blair, owned a 3-piece suit and was allowed to hang around the booth. A suite had been reserved for a series of presentations to the electronics magazines of the time (EDN, EE Times, etc.) with the only Tektronix guys present being those with 3-piece suits, namely Marketing and Bruce. Although this was the first public reveal, the 468 hadn't been released for production yet as we were still fighting an overheating issue. The TRW A/D converter ran very hot and the latest redesign that solved the heating issue hadn't made it out of the model shop by the time of the trip. So the way that Bruce ran the presentation was to fire up the 468, show it off in various ways, then shut it down and take off the case, ostensibly to show how we'd mechanically integrated a digitizer with a 465. After letting the 468 cool, Bruce put the covers back on, fired it back up, and showed a few more features to complete the presentation.

Tektronix oscilloscopes were, of course, well known for their analog excellence. But though not featured as a "banner spec" or trumpeted in the advertising, their environmental ruggedness was also of the highest order. Meeting that standard was a significant challenge for the 468. The 468 started with a 465B which was extended by a 'top hat' and a 'fanny pack'. It was the 'fanny pack' that caused the biggest problem as we saw dramatically demonstrated during vibration testing. That testing involved securing the scope (without covers) to a shake table and then running the shake test while varying the vibration frequency looking for resonances. The room was darkened and a strobe light synced to the vibration frequency was used to observe the test. Well, the scope was secured by straps at the front and back. The 465's heavy power supply was at the back but the addition of the 'fanny pack' meant that the power supply was now quite a bit forward from the strap down point then where it was when the 465 was shake tested and therefore subject to a significantly greater bending moment. Under the strobe light, you could see the big electrolytic filter capacitors swaying back and forth like palm trees in a hurricane. The first 468 shake test ended abruptly when one of those filter capacitors was flung free! Quite a bit of work went into securing all those heavy components before the 468 was able to pass "shake & shock" testing.

468 Ad Shoot.
Although the picture was taken when we were working on the 2430, it shows the 468 actually being used. The picture is a setup, of course, but the reason that the 468 happened to be there is because we really did use it extensively. Here's the story behind the picture.

It was 1983 and Tek was growing rapidly. HR decided to create a glossy 10 page recruiting brochure and the picture is a scan of one of those pages. The only person that was specifically recruited for that picture was Kathy Sunderman. She was a relatively new and very competent HW engineer. She was also an attractive young woman so the PR folks were always calling on her! The photographer decided they needed a couple of other bodies in the photograph so they grabbed Fred Azinger and me. (Fred's face is hidden so he didn't get a credit on the caption.) There were other folks hanging around, including the project leader, Bruce Blair. They wanted a "younger" look and I fit that look but the problem was that I was wearing a T-shirt. Bruce happened to be wearing a nice button down shirt so stripped it off and that's what I'm wearing in the picture! Just to further date the picture, my arm is resting on the UV PROM eraser. 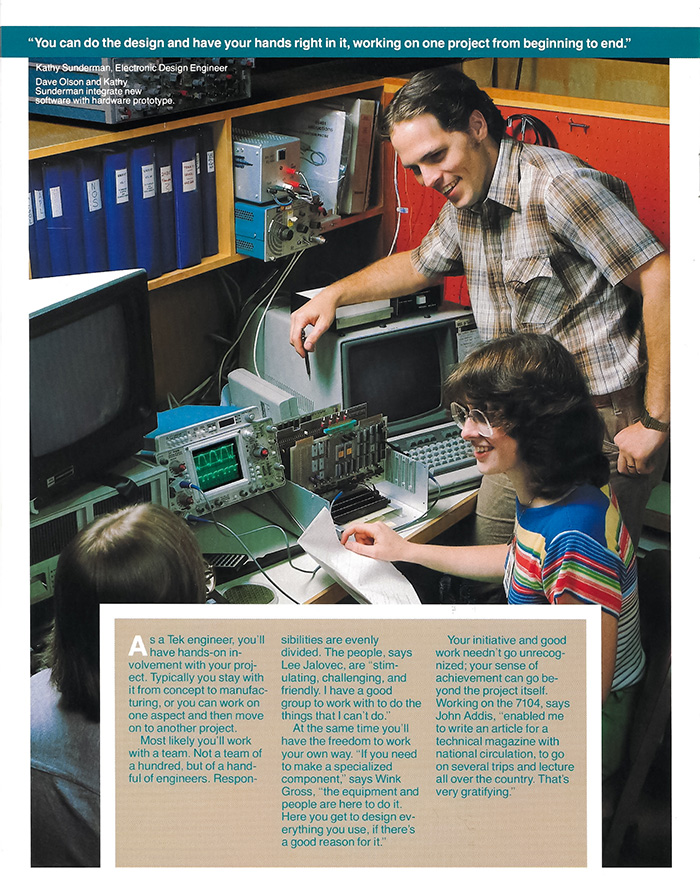 No Spell Check
Besides actual design work, we did a whole lot of technical reviews. Hours and hours were spent going over the manual, theory of operation, specifications, etc. We even reviewed the external markings. One of the 465 features was the ability to use it in XY mode including the ability to modulate the Z axis, i.e., trace brightness via a BNC connector on the back panel. The text on the back panel said "5V P-P causes noticable modulation at normal intensity".  So thousands of 465 and  475 oscilloscopes had been shipped with that misspelling which was only discovered (I'm pretty sure) when we were reviewing the external markings of the 468.