Tektronix Annual Reports contained a letter to shareholders and employees.  These partial scans contain these letters.  In addition, the 1964 and 1965 annual report included a short "Tekism" on oscilloscopes on the rear cover.

On the rear cover of the 1964 Annual Report is this "Tekism":  The hope of man is to control his environment.  Research beckons that his goal can be reached.  He has leashed dread disease; He has leaped into space.  In a sliver of time, incredibly small events occur, billions upon billions.  Any one of them may change your your tomorrow.  To measure them exactly demands instruments of performance never before called forth.  Such an instrument is the Tektronix oscilloscope.  Click on the image to view the PDF. 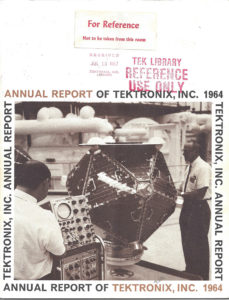 On the rear cover of the 1965 Annual Report is this "Tekism":  Electronics emerges today not only as an industry but also an influence.  Technologies already exist that will allow such an interweaving of electronics throughout society that it will no longer be correct to speak of an "electronics industry."  When that happens, the size of the market for waveform measuring devices may well be inconceivable.  The most important such instrument is the oscilloscope.  Click on the image to view the PDF. 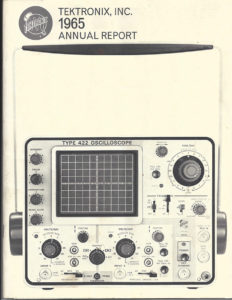