Tek Labs was an early adopter of Smalltalk, an object-oriented, dynamically typed reflective programming language.  In the mid-1980s the Artificial Intelligence Machines group was formed in the Information Display Group in Wilsonville to bring Smalltalk workstations to market. Dave Squire was named to head up the group. This August 10, 1984 TekWeek features Pegasus, the first of the Smalltalk products. Click on the image to view the PDF. 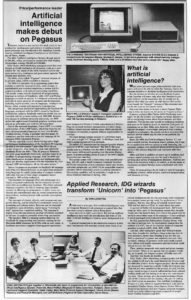 This June 14, 1985 TekWeek features Dave Squire discussing the AIM products and market. Click on the image to view the PDF. 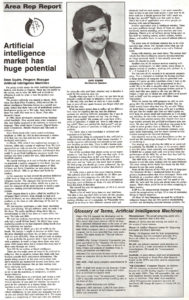 This August 9, 1985 TekWeek features the introduction of the 4405 and 4406 worstation products. Click on the image to view the PDF. 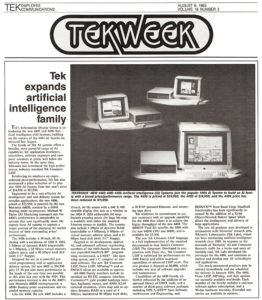