This article was first printed in the September 1964 issue of TekTalk.

Roads in Tektronix Industrial Park have been named after four outstanding scientists who have contributed much to physics and electronics: Robert A. Millikan Dr. A. A. Knowlton, Karl Braun and Alan D. Blumlein. This article will discuss some of Mr. Blumlein's contributions. 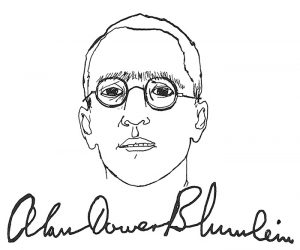 June 7, 1942-In the sky over Britain a four-engine Halifax bomber is having motor trouble. Aboard is a team of research scientists returning from a flight that had tested a radar bombing aid. Among the scientists is Alan D. Blumlein. The plane is having trouble and crashes. There are no survivors.

So ended the life of Alan Blumlein, 38, one of electronics' most brilliant circuit engineers - and one of the least acknowledged. Very little of his work was published; he was too busy to write. Technical literature is the poorer for it.

His name is seldom seen. The last few years of his work were shrouded in wartime secrecy. Even his death was not reported for three years, and then only briefly.

Blumlein avoided publicity to such an extent that photographs of him are almost non-existent. He was educated at Highgate school and the City and Guilds College, London. Soon after he graduated he began his professional career by joining International Western Electric Corporation. His work there, mainly on problems of interference in telephone lines, soon provided evidence of his exceptional ability and originality in circuit engineering. At least eight patents resulted from this line of communication work.

In 1929 Blumlein moved to the research department of British Columbia Recording Company (which shortly became part of Electric & Music Industries). He became interested in the problem of practical stereophonic sound and soon realized that for two-channel reproduction over loudspeakers- a problem that differed fundamentally from earlier experimental systems using headphones-it was necessary to convert the outputs of two spaced microphones into separate amplifiers before feeding them into the speakers. Blumlein believed that the main factor in locating a source of sound was the difference in the time of the arrival of the sound at a. person's two ears at low frequencies and in the difference in intensity at high frequencies. He therefore devised a method of converting phase differences in the microphone outputs into amplitude differences - the basis of modern two-channel stereo systems.

To carry the two channels in a single groove he developed the complex recording procedure universally used today in a stereo system. Stereo cutting heads and pickups were developed and a number of discs successfully cut. In 1931 Blumlein filed and was granted a British patent covering two-channel disc recording and motion pictures-a patent which lapsed before commercial use was made of his system.

Some of his original stereo records, pressed almost 30 years ago, are still in existence. When played on modern stereo equipment they show good channel separation and frequency range. However, restricted audio range and high surface noise of the shellac pressings played with the then-current steel needles, impaired the stereo illusion-one reason these discs were never marketed. Blumlein recognized the limitations of shellac as a pressing material and in his patent claim foresaw the need to develop a material of the cellulose acetate type and the use of a sapphire stylus.

Soon after this, the idea of stereo records was pigeonholed. Not until 1955 was his stereo recording system put into practice, first for EMI stereosonic tape recording and soon afterward for the modern stereo disc.

With stereo shelved, Blumlein did not remain idle. In 17 working years until his early death, 138 patents were granted to him solely or in collaboration with other engineers-an average of one every 46 days!

His circuit developments in instrumentation, recording, slot antennas, television and radar were often far in advance of his time. Even now it's claimed that many of his circuits are not being fully exploited.

Most Tektronix scopes use several of his circuits. We have paid royalties to EMI for several years for the privilege of using them.

Some of his basic work affects the millions of homes that have television receivers. Such was the contribution of Alan Blumlein, circuit engineer and inventor.

As H . A. M. Clark of EMI, one of Britain's foremost recording engineers, said "Alan Blumlein was a perfectionist in everything. No detail was too small to escape his attention and interest. Even when building prototype pieces of equipment, he would take the greatest care to see that his soldering was of the highest possible standard."

In his brief working life, he achieved more than a whole team of present day research engineers usually hope for. He lived to see only a small portion of his discoveries in full use. In his lifetime his stereo work was applied only for one purpose- the design of aircraft sound locators for ·use in a war which caused his death.

(Material for this article was taken from March 1961 "Electronics World.")