Growing up in Seattle, Robert J. Davis developed a broad range of interests ranging from radio technology to mechanics, working in his father's auto shop. He interrupted his studies in chemical engineering for the war effort in 1942 and joined the U.S. Coast Guard. There he met Jack Murdock who would later recruit him for work at Tektronix, but Bob chose to finish his degree first.

He joined Tektronix in 1948 during the first wave of hiring when the entire company consisted of only a few dozen people. While he became recognized for his organizational abilities and for getting things done, he was not known for his diplomatic skills. His initial assessment of the oscilloscope assembly line was: "Who did this stupid setup?". The answer came from none other than Howard Vollum who said: "I did". This was his introduction to the co-founder of the company. However, this unfortunate first encounter didn't prove to be a problem. As result of his stellar results on the production line Howard selected Bob Davis to be Vice President of manufacturing in 1954.

This July 1953 TekTalk provides some insight into his background some delightful stories about his adventures at Tektronix.  Click on the image to view the PDF. 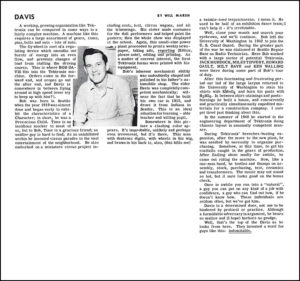 This December 1953 TekTalk describes his visits to other manufacturers.

By 1958 Davis was appointed Executive VP and during his tenure he not only significantly reduced manufacturing cycle times and increased efficiency, he instilled a sense of pride in the production line workers. Like "Dal" Dallas, Bob Davis was included the first group of TEKEM employees in 1959 where they both were given the opportunity to purchase shares of company stock prior to the public offering.

As Tektronix continued to expand, including starting overseas operations, Bob Davis' aggressive, hands-on style lost its luster. Friction with other senior managers and other issues led Howard Vollum to reassert control of operations in July 1962. While Howard never expressed doubt about Bob Davis' motives, sincerity or past success, he felt Bob's effectiveness had run its course. Bob Davis did retain his position on the board of directors.