This article was first printed in the July 1963 issue of TekTalk.

Roads in Tektronix Industrial Park have been named after three outstanding scientists who have contributed much to physics and electronics: Robert A. Millikan, A. A. Knowlton and Karl Braun. This article will discuss some of Karl Braun's contributions. 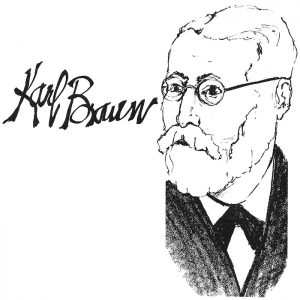 Karl Braun's work on the cathode-ray tube enabled him to further his efforts in wireless telegraphy, for which he was awarded the Nobel prize for physics in 1909, jointly with Guglielmo Marconi.

Braun was born in 1850 in Prussia. He received his doctor's degree from the University of Berlin in 1872: In the following years he taught at several universities in Germany. Later he came to the US. He was detained here for several years due to World War I, and died here in 1918.

In 1897 he published an account of the cathode-ray tube (the Braun tube) that enabled him to make a study of electric oscillations with frequencies of over 100,000 per second. This was the same year J. J. Thomson, of England, made his tube for measurements to determine the identity of the electron (Thomson'~ tube was used for this experiment only.)  Thomson did not think of his tube as a CRT, but merely as something to prove his theory that the electron was influenced · by both magnetic and electric fields. Braun's tube was much larger than Thomson's, but much simpler in design. Braun's tube was the first CRT as we know it.

The drawing illustrates the parts of the Braun tube: (A) the cathode is a plane disc perpendicular to the axis of the tube. (B) the anode is to the side of the tube "'So it is clear of the path of the rays. (C) the diaphragm of metal (aluminum or tinfoil) is uninsulated. The diaphragm has a circular hole about 2mm. in diameter; the important result is that the jet of rays issued from the hole and down the tube is cylindrical, thus making one spot on the screen, instead of a flood of rays.

Another important contribution was his introduction of the "fluorescent screen", a mica plate (D) coated on the side bombarded by the rays with a fine layer of mineral substance, chosen for its intense fluorescence under cathode-ray bombardment.

The Braun tube worked like this: a narrow beam of cathode rays passed between the plates of the diaphragm. The beam then focused on the fluorescent screen, where the motion of the luminous spot mapped the oscillations of electric or magnetic fields through which the beam had passed. Precise information could be obtained by studying the image of the spot with a rapidly rotating mirror, facing the CRT.

Of course Braun's tube isn't nearly as complicated as a modern day CRT. To compare the Braun tube to modern CRT's would be like comparing the Wright brothers' plane to jet airliners.

There have been many intermediate steps working up to the modern tube, yet the basic principles of today’s tube are the same as in Braun's.

Tektronix tubes are made of evacuated glass or ceramic containers. Inside the tube is a device called the gun, which generates the electron beam. The gun consists of three or more elements, then the focusing electrodes, anode or anodes, vertical and horizontal deflection plates, helix and phosphor face plates.

Braun's tube was a great assistance to him in later investigations of wireless telegraphy.

In the course of his electrical studies, he discovered a phenomenon which was to make possible the "crystal set" (radio) so familiar in the 1920's: A large number of substances, mostly crystals of binary compounds, had the property of offering more resistance to a current passing in one direction than to one passing in the other ; such a crystal when placed in a circuit through which an alternating current is flowing, partially suppresses the current in one direction but allows it to pass through in the other, thus ' acting as a rectifier (changing AC to DC without intermediate transformation of energy) . As early as 1901, when audible reception first came in, Braun urged that the possible use of these substances be thoroughly examined.

Marconi's original radio system had its weak points. One was the comparative weakness of oscillations emitted from transmitters, due to damping; another, that the waves from different transmitters jammed each other at the receiving station. These were the problems Braun gave his attention to when he started working on wireless telegraphy.

From 1899 to 1905 Braun worked on numerous experiments in wireless telegraphy too detailed to go into. He solved many of the practical problems in Marconi's system and made many .other improvements.

Marconi was the brilliant amateur, not indifferent to the commercial value of his spectacular achievement. Braun, who shared the Nobel Prize with him was the trained physicist applying his knowledge both theoretical and practical, to this new branch of electrical science, with little thought beyond the solution of the problem. Marconi protected his inventions by patents; Braun · gave his freely to the scientific world.