Dave Friedley replaced Earl Wantland as President and CEO of Tektronix on October 23, 1987.  He flattened the organizational structure and spun off many of the company vertically integrated component groups and began focusing on growth.

The Imaging Research Group in Tektronix Labs, headed up by George Fabel, had developed the liquid crystal color shutter.  This shutter was first used to provide frame sequential color on Tektronix monochrome displays but work had progressed on also using it for stereo displays  (Tektronix first foray into stereo display was on the Transmission Electron Microscope in 1968).  George was looking for a clear market winner for stereo and settled on chemical modeling.  They bootlegged a chemistry workstation project to learn more about this market and opportunity.

Looking for new areas of growth, this effort was spun out of Tek Labs in 1988 and became the CAChe Group headed up by George Fabel.  In 1989 they introduced the CAChe WorkSystem using a Macintosh computer with a fast coprocessor card and the liquid crystal color shutter  (the CAChe Group occupied the space in Building 13 just to the west of the vintageTEK Museum).  By 1991 this group was spun out of Tektronix and became a wholly-owned subsidiary named CAChe Scientific Inc.  In 1995 CAChe Scientific Inc. was sold to  Oxford Molecular Group PLC.

The museum has a working CAChe WorkSystem on display and the 3D glasses to view the image.  Without the glasses, you can see the dual image in this photo. 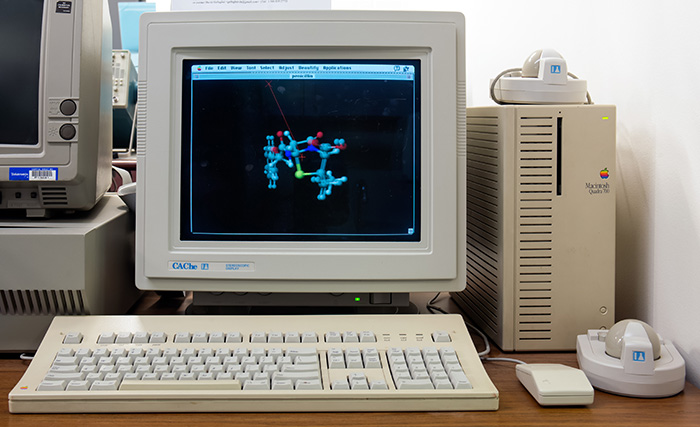 This 1992 brochure is from the CAChe Scientific subsidiary.  Click on the image to view the PDF. 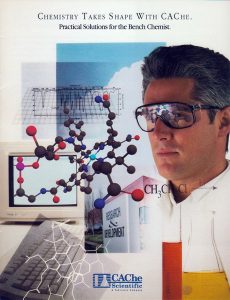