In 1959 the Air Force awarded contracts to Hickock for Tektronix Type 545 scopes, an order which involved both Hickock and Lavoie. A Tektronix field engineer who got a peek at a preproduction model reported that what he had seen was not even an original, but a modified Tektronix scope, which had been disassembled, rearranged internally and put back together again.

When Tektronix learned of the 545 contract, they contacted Hickock immediately warning that if they built the instruments they would be infringing upon Tektronix patents. The government asked Tektronix to license to Hickock the use of Tektronix' patents which Tektronix refused.

Previously, Bill Webber got a call from the order department about an order from a small company in Caledonia who was a subcontractor for Hickock for two plug-in amplifiers. Bill Webber told Frank Hood and another engineer, Jack Day, to ship the units but drill some holes in the chassis and take pictures of it and document it thoroughly, so we can clearly identify it. Dubbed "D-holes," the bogus holes had no meaning whatsoever in either the physical construction or the electrical performance of the equipment. Those holes showed up in the instruction manual that the Signal Corps was given and you could almost read the patent notice that Tektronix silkscreened on the chassis.  The Air Force was even less subtle as they plagiarized the Tektronix manual except they skipped a single paragraph.

Conversations with Hickock, Jetronics, and Lavoie ate up months and by 1960 the company had exhausted any hope of a settlement with its competitors. In January 1961 Tektronix retained the firm of Watson, Cole, Grindle and Watson to pursue the case against the government. Suit was filed the following month where Tektronix alleged that the government had given other firms contracts whose specifications were for the manufacture of Tektronix Type 535 and 545 oscilloscopes. The instruments contained circuits invented by Dick Ropiequet, Bill Polits, and John Kobbe including the sweep generator, resistance-wire tube, and the distributed-amplifier termination and unblanking circuit.

This February 28, 1961 Tektronix Newsletter announces filing suit against the US Government. 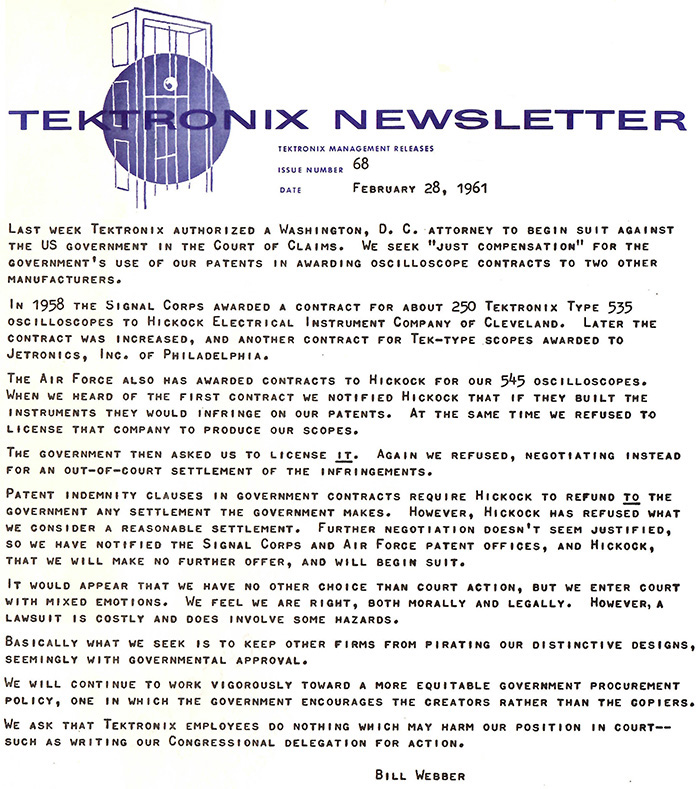 Between filing suit in February 1961 and the opening of the actual trial in February of 1965, years of legal maneuvers consumed a small fortune in legal fees. Adding to the complexity of the case was a countersuit, brought by Lavoie against Tektronix seeking to win the right to produce Tektronix Type 545A oscilloscope which proved unsuccessful.

This January 29, 1965 issue of TekWeek describes the beginning of the lawsuit against the U.S. Government.  Click on the image to view the PDF. 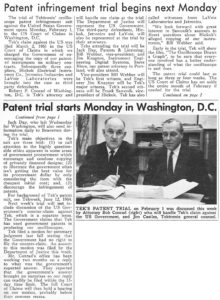 This February 5, 1965 issue of TekWeek describes the 39 boxes of documentation sent for the trial.  In addition, the company screened Frank Hood's film The Oscilloscope Draws a Graph in order to make the Court familiar with the workings of an oscilloscope. 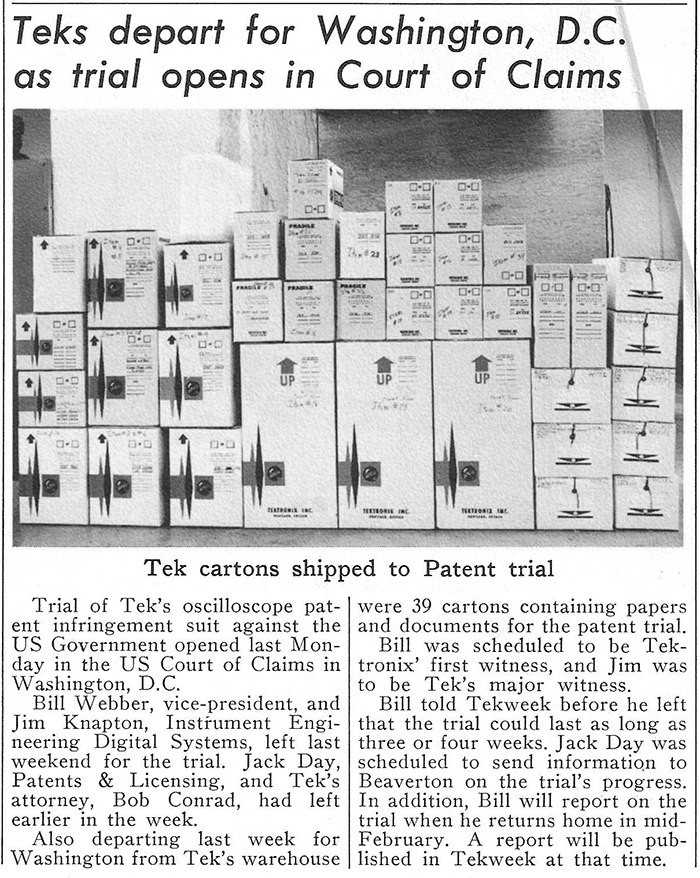 This extract from the summer 1965 Hearings on the Subcommittee on Patents, Trademarks, and Copyright includes the testimony of Robert Conrad, patent attorney representing Tektronix. Click on the PDF to view the document. 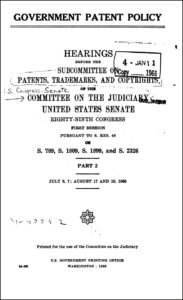 The trial ended on March 4, 1966 after which the U.S. Court of Claims Commissioner indicated he would require up to a year to study the case before making his final judgment. It took until May, 1970, before the Commissioner ruled in favor of Tektronix. All eight of Tektronix' patent claims were ruled to be valid and infringed, which entitled Tektronix to recover reasonable and entire compensation for the unauthorized use by the government of its patented inventions.

The trial judge's recommendations were submitted to the Court of Claims in September 1970 for adoption and the case entered the accounting phase to determine the amount of compensation.

This March 30, 1973 Tekweek describes the beginning of the compensation phase of the trial. 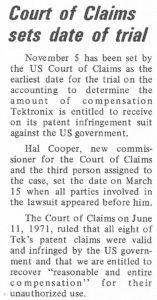 This December 7, 1973 Tekweek features an update on the compensation phase of the trial. 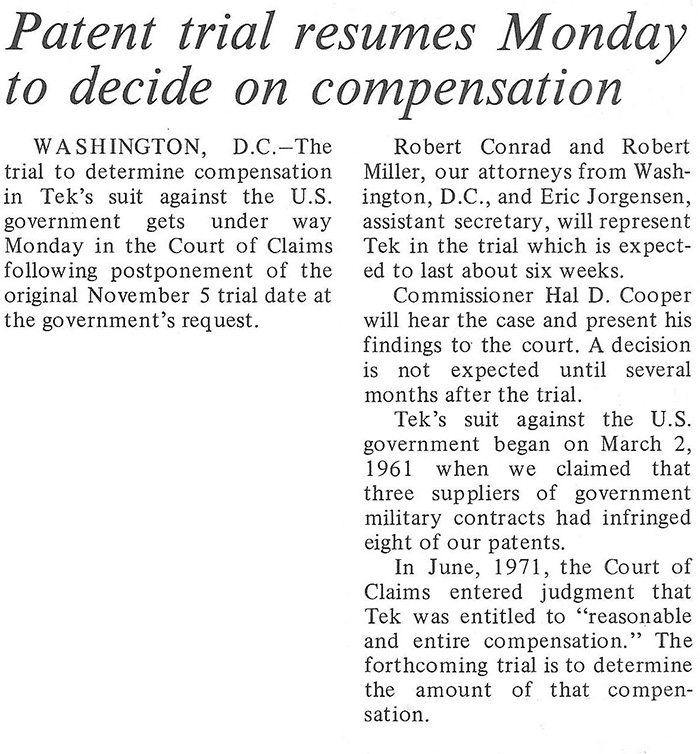 In September 1975, Tektronix received judgment from the Court of Claims that the company was entitled to $7,381,174 in compensation, penalties, and awards. The 1975 judgment did not stand and the Court of Claims determined in March of 1977 that Tektronix was entitled to a royalty of 10% on the infringing procurement, plus damages, which brought compensation to just over $4 million. The final award took two more years, but in 1979, almost eighteen years after Tektronix filed suit against the U.S. government and three secondary defendants, Tektronix vs. the U.S. et al came to an end.

This January 19, 1979 TekWeek features the final article and closure of the patent litigation against the U.S. Government. 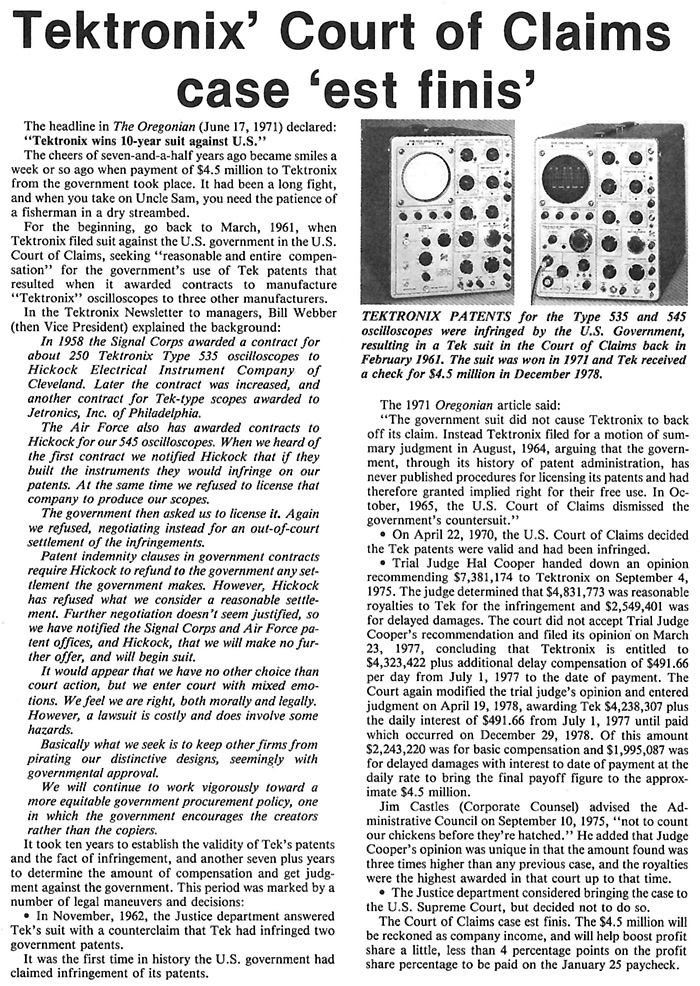 This PDF contains 19 different TekWeek articles on the patent litigation starting from January 29. 1965 through January 19, 1979.  Click on the image to view the PDF. 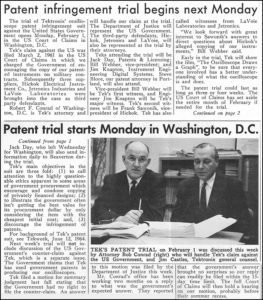 This undated photo shows the Hickok booth with a clone scope. 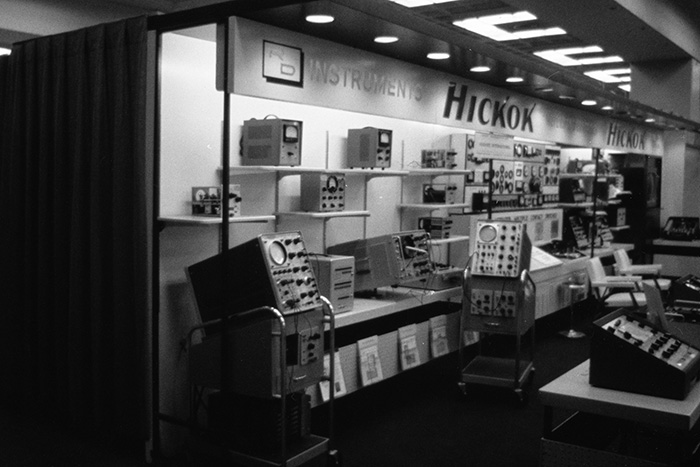 We have both a Tektronix Type 545 and  Jetronic MX-2330A/G Oscilloscope with a Hickok 1B23 plug-in on exhibit at the museum.  Note the scopes have different plug-ins but are otherwise identical. 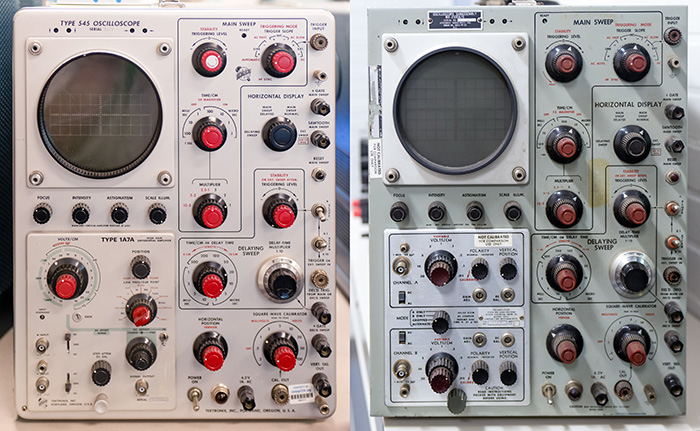