This description of Don Ellis is from the "Winning With People: The First 40 Years of Tektronix" book. This book is available on our eBay store in PDF format on CD and in print depending on availability.

Don A. Ellis came to Tektronix to aid in the inventory control process. He soon became the informal financial planner and adviser to Murdock and Vollum. Something of an introvert, something of an intellectual, Ellis would make his mark on Tektronix and the lives of those at Tek, for it was Ellis who conceived of a number of employee benefit programs which became virtually synonymous with the company. He moved from inventory control to finances, and was soon at the center of the financial arrangements surrounding the Tek Foundation, particularly those having to do with the tax consequences of the foundation for the shareholders. A volatile man, Ellis would have his share of disagreements with his colleagues. Even though he had a private office, it was impossible to hide the fact that Ellis and Bob Davis were engaged in conversation, much less disagreement, for both had voices that seemed to penetrate cinder-block.

Ellis worked hard, however, to improve the financial and personnel management of the company. As so often happens when a privately-held company takes off very rapidly, the owners become so engrossed in the business that they have little or no time for — let alone interest in — the complex financial arrangements which will insure that the company functions smoothly on a day-to day basis. In these, and in numerous other ways, Ellis helped. He worked to upgrade the retirement and medical benefits of employees, although occasionally his schemes were so exquisitely complicated that only he understood them. He often resorted to contributing articles to the company paper in an effort to explain employee benefits, but always with humor and style. In one celebrated incident, an employee publicly disagreed with a ruling Ellis had made with respect to her retirement benefits. This provided a test case for the appeals process which had recently been established in the company. Through the appeal, Ellis found his ruling overturned. Rather than take such a thing personally, he welcomed the decision as the healthy result of a sound process.

With respect to financial management, Ellis expanded the accounting office. Ellis also worked for better purchasing controls and financial record-keeping. Although he and Dallas did not always see eye to eye, for years Ellis was just about the only person in the company who attempted anything like projections on which to base future orders, future purchases, and future sales, something which Dallas considered essential to sound sales strategy.

All of this indicated the need for the company to become more systematic in its internal management. But in the early fifties Tektronix was not ready for that. It was too early. There were other, more pressing things to be done. Neither the personalities at Tek at that time nor the forces which moved the company favored the kind of hard-headed attention to management detail which would be called for a decade later. As yet the company was young, and although they did not will it, the young turks at Tek were about to take on the industry leader.

This June 11, 1981 TekWeek article features Don's retirement. Click on the image to view the PDF. 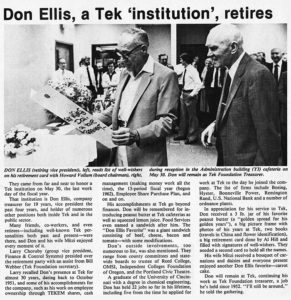