Dubner Computer Systems of Paramus, New Jersey, was acquired  in 1984 to add a line of character generators, video paint boxes, and graphics systems for television to the Grass Valley Group product line. Dubner Computer systems had multiple products from Credit Union software to lottery systems, to hardware and software products for the television industry.

This 1984~1985 photo shows Grass Valley Group engineer Ron Barnett (left) with Harvey Dubner (right) in the Fort Lee, New Jersey, office. Harvey Dubner was an interesting person who, whenever or wherever he was and particularly at the NAB show, would setup a portable table and amaze folks with card tricks. He appears to be doing a card trick in this photo as well. 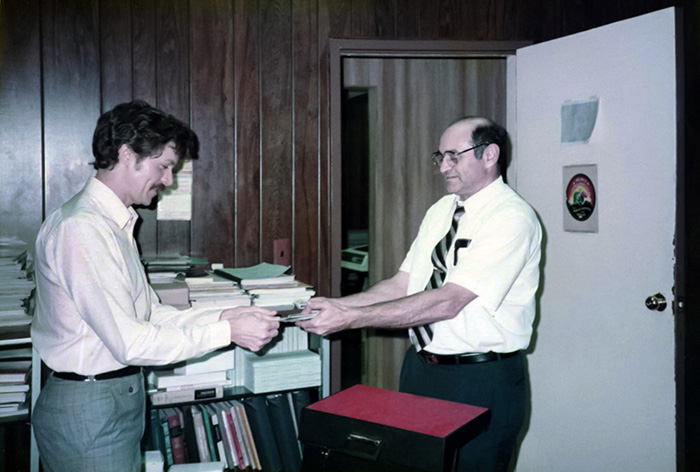 This October 16, 1987 TekWeek features an Emmy awarded to Dubner for "Colorization™ of black and white video".  Click on the image to view the PDF. 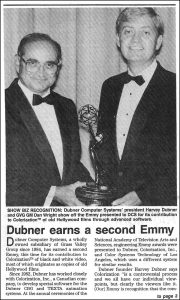 There are two videos of the Dubner Painter computer graphics system circa 1988. Harvey appears in this part 1 video about 2:40.

Harvey Dubner was an engineer and mathematician who was noted for his contributions to finding large prime numbers. Wikipedia has information on Harvey. (Wikipedia website)

The Dubner brand was eliminated in 1991 through integration into the Grass Valley Group. Harvey passed away October 23, 2019.