Tektronix developed a fiber optic readout display for the 576 curve tracer and the 5031R dual beam oscilloscope.  This is before the days of 7 segment displays, alpha-numeric displays, and LC displays.  It consists of a faceplate with "dots" forming the image with fiber optic cables to a PCB with incandescent bulbs for illumination.  This photo shows the faceplate with the specific character "dots" (the display is vertical so is shown on it's side).

The displays along with the drive electronics were mounted on a PCB.  The cover has been removed from one of the "digits" and you can see the two boxes with the PCB and incandescent bulbs.  Half the fiber optic cables are woven into the correct positions on the first box and the other half pass through to the second box.  On top is a display with just the fiber optic cables attached.

This was quite advanced for the era and offered significant customer value in direct parameter readout as well as allowing setup information to be captured in a screen photograph for future reference.  This photo of the display readout on a 576 curve tracer shows the crisp and clear characters.

This October 28, 1968 Electronics review features this display. Click on the image to view the PDF. 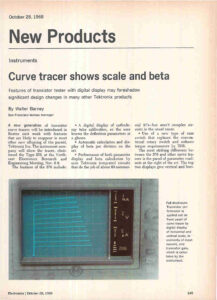