Gale Morris was the first Industrial Designer hired by Tektronix.  Gale provided this narrative to ArtCenter College of Design where he graduated in 1958.

I grew up in the middle of WWII. As kids, we built models of Jeeps, Tanks and B-25's. Then I started making models of cars which led to an organization known as the “Fisher Body Craftsman's Guild”. My first attempt at age 12 brought a national award of a cash scholarship in trust. I then started playing with real cars.

My teenage years were dominated with mechanical interests. I worked a couple of summer jobs operating test versions of huge Caterpillar tractors at their proving ground, which was close to my home. I just wasn't interested in college, yet. My parents suggested a visit to a place called ArtCenter. The College turned out to be a perfect fit for me.

When I graduated ArtCenter in 1958, I called on a startup company in Oregon by the name of Tektronix (known as TEK). They had heard about Industrial Designers, but didn't have any. We talked for two hours then they asked me to come to work the next morning. They had a vacant desk and said, “Sit here and do whatever industrial designers do.”

This place was indeed a creative oasis.

I learned quickly not to ask what to do or what I should be working on. You were hired because you were perceived to have certain skills and you should be able to figure out where to apply those skills. Bringing home design awards for new products was, well, okay, but contributing new features and design ideas brought high demand for TEK's new products. This was the real prize for our efforts. We did lots of it. The company had 24,000 employees when I took my retirement at age 50.

I’m fortunate to have a family that taught me the skills and attitudes to make the most of life's opportunities AND accommodate some misfortunes along the way.

Used with permission of ArtCenter College of Design 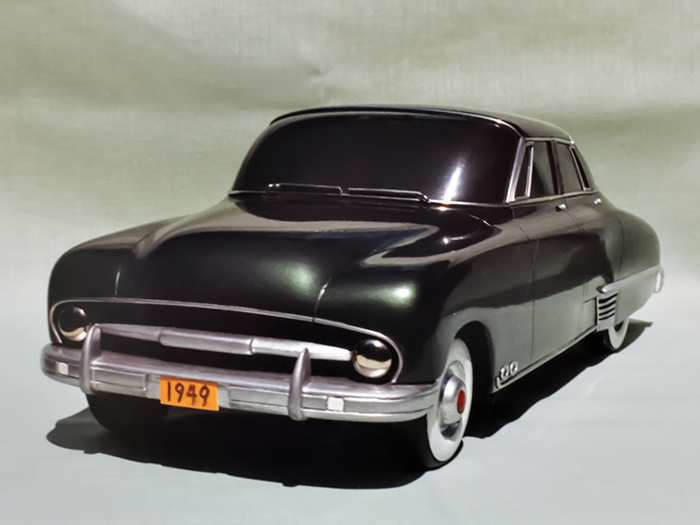 This May 11, 1987 TekWeek article featured Gale Morris and his model car. 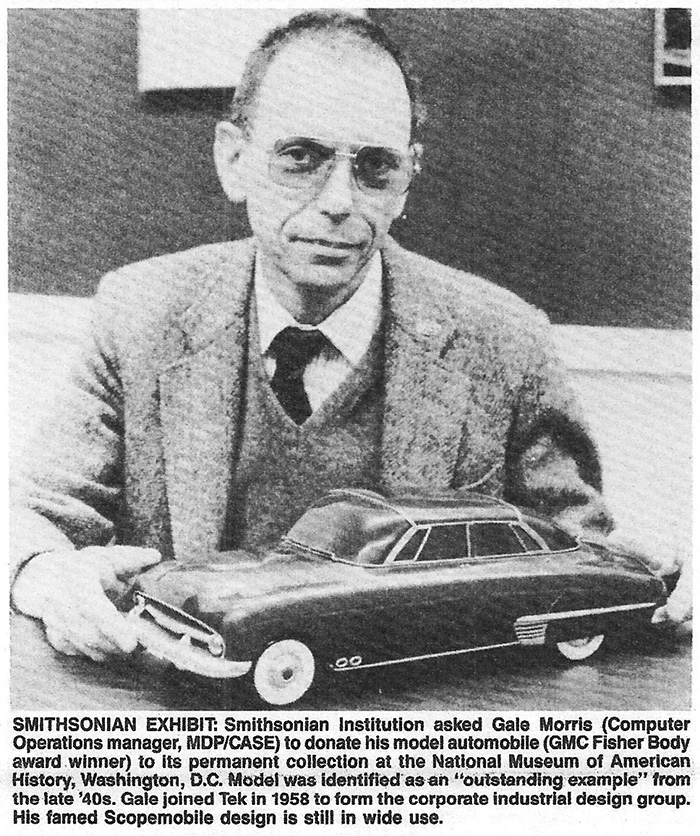 At Tektronix his first assignment was to develop new concepts for the Scope Mobile design. 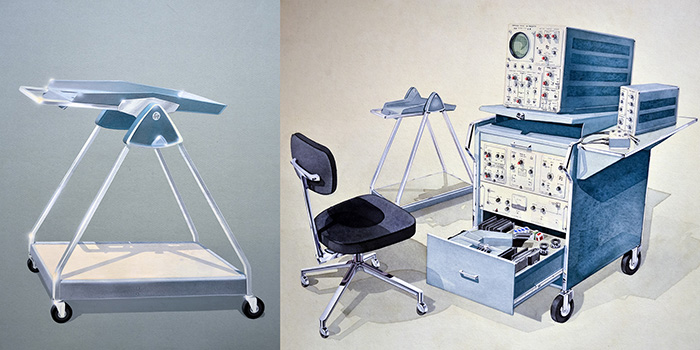 These were significant improvements over the original Scope Mobile.  The left sketch went into production as the Model 200 Series Scope Mobile and the right sketch was never productized.

This extract from an article on Industrial Design by Dick Koe describes some of Gale's early accomplishments.

Tek has a habit of astounding onlookers at IRE and WESCON. Take the past year:

* At IRE in New York last March, Tek surprised visitors with the speed with which its new display booth went up and came down. The booth's highly functional qualities - to say nothing about its eye appeal - also impressed the public. Each section of the booth folded up and became its own packing case.

These achievements reflect the talent and efforts of a highly specialized group known as Industrial Design - headed by Gale Morris. He and his assistant Bob Metcalf, together with Mechanical Engineering, devote full time to industrial design of Tek's products and instruments. Gale's group and Mechanical Engineering are part of Bill Polits' Instrument Design Engineering Division.

Possibly the highlight of the year for Gale's group was the industrial design contest at WESCON where two of their product designs - the Type 201 scopemobile and the high frequency probe - won merit awards among 172 entries. The scopemobile went on to win an award of excellence.

The judge chose the scopemobile as one of the five finalists for "its pleasing color scheme, sturdy construction, ease of operation, and fine detail work." Gale was the design director of the new scopemobile with assistance from Archie Yergen, now of Militarized Products Engineering, and Leon Prentice of Mechanical Engineering.

"We started this new scopemobile design because of customer requests and field engineer recommendations," Gale notes. "Possibly the two leading features of this new mobile are its quality and low price. These were made possible by extensive tooling."

The new scopemobile has four types - 201, 202, 203, and 204. Designed for the busy engineer, all have easily adjustable trays at whatever height or angle desired. A total of none tilt-lock positions are possible - six upper levels and two lower levels. The tray adjusts through 36 degrees in six 4.5 degree step upward from the horizontal axis and two 4.5 degree steps downward. A convenient handle operated with one hand makes the adjustment of the tray easy, even when it is heavily loaded.

All four are mounted on five inch rubber tire wheels for easy movement around the work area. Optional plugin carriers are available for storing extra plugin units. The scopemobile is constructed mostly of aluminum with anodized finish on handle and legs. Other parts are painted with tough blue vinyl.

Besides the scopemobile and probe, Gale's group has designed numerous other Tek products. A major project was packaging the Type 321 transistorized portable scope, complete with carrying handle.

How does a design group approach a problem such as designing and oscilloscope or one of its accessories? "I believe the approach can be called 'Conceptual Thinking'," Gale suggests. "We start from the outside and then work in. We ask ourselves what job the instrument has to do and what its relation is to the operator. The answer points out an approach to solving the design problems. The design must be workable." 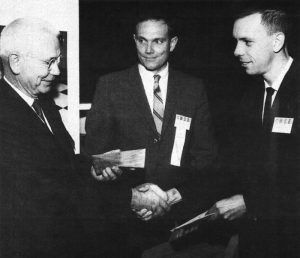 Here is the 1962 Tektronix Catalog for the Model 200 Scope Mobiles. 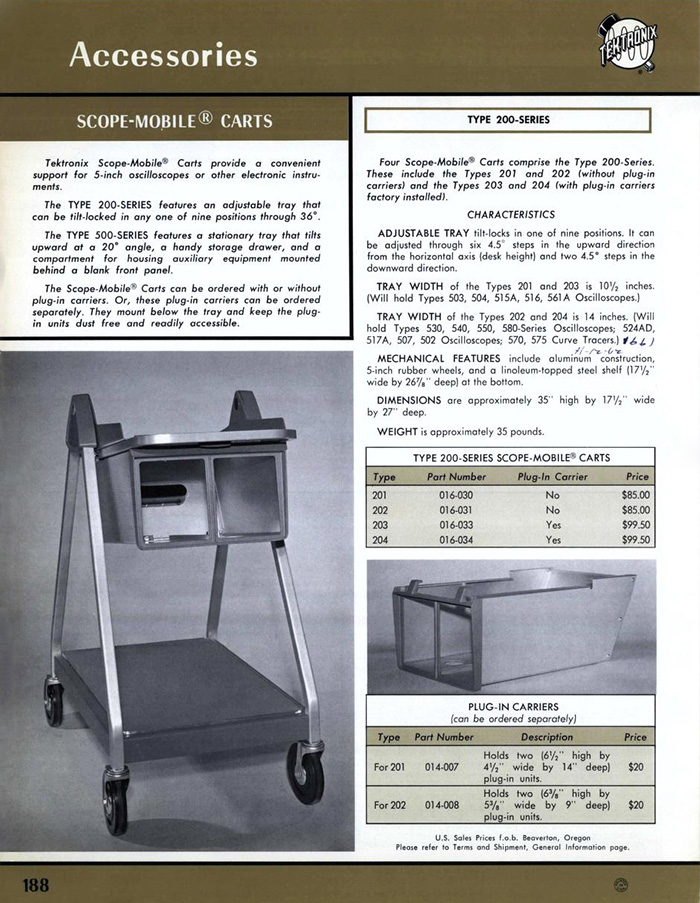 We have the original model 500A Scope Mobile and the newer model 204 Scope Mobile with the plug-in carrier on display at the museum. 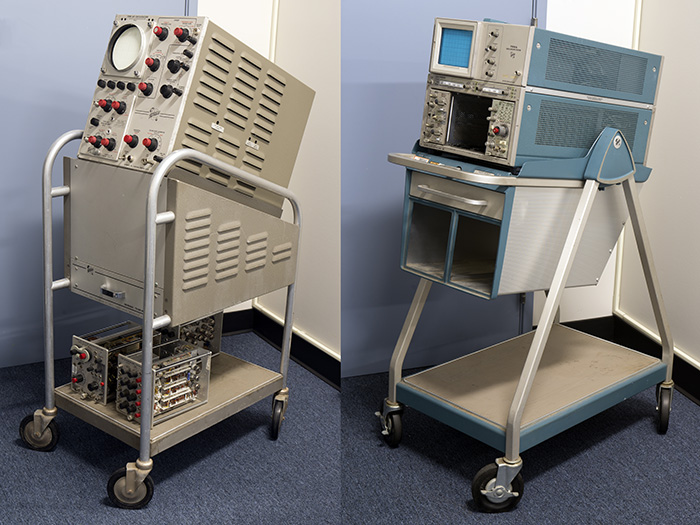 Gale hired additional Industrial Designers to create an Industrial Design team to work on all Tektronix products and their skills greatly influenced new designs including the 7000 series introduced in 1969.

This video is of the slide show Gale presented at a meeting of the worldwide sales force at the launch of the "New Gen" 7000 series.  Gale provides an introduction to the slide show some 45+ years later.  Additional production assistance was by Riley Morris-Redford, Paul Adams, Janet Devore, Joshin Yamada, Corey Morris and Tracy Matthews. 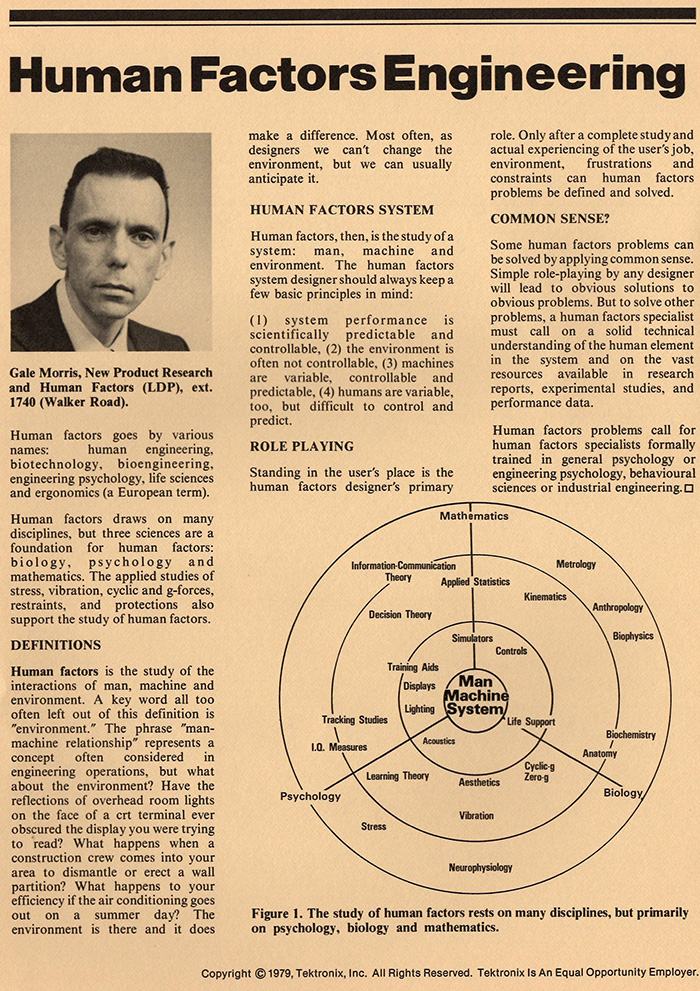 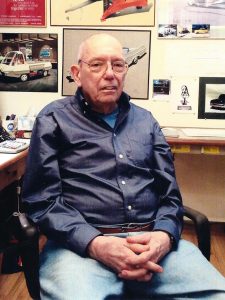 Gale Morris in his home office