↓
Home→History of the 5000 Series Oscilloscopes

It was late 1969 when the low frequency scope group was about finished with the 5030 scopes (1969), when Val Garutz and I prepared the product proposal for what first became to be called the LF-Scopes, then the D10/5103N and finally the 5000-series. The proposal went two or three times to the Engineering Council before it was accepted (Jan 1970). The group was formed under leadership of Jerry Shannon.

I had built a cardboard model of what we envisioned, half the scope for the CRT, etc. and the other half for three plugins and power-supply, all within 5.25 inch height, a standard height increment for 19” racks, and the mainframe with three plugins for less than $1000. Above the plugins a strip of space was envisioned for plugin on/off switching, etc. I remember Larry Weis walking by my bench suggesting that we should make the plug-ins maximum height and build that switching functionality into the individual plugins.  Seemed like a good idea.

One year later (Jan 1971) with about 12 people on the project (EE, ME, Manual, ECB) we had two scopes and three plug-ins in production using several new manufacturing methods and many new low-cost components. Almost by default I was working as the lead person on the mainframes and Gary Vance performed that function for the plug-ins.

Throughout that project some big hurdles had to be overcome, e.g., using tin plated rather than gold plated circuit boards, soldering active components in the board rather than using sockets, using low cost open potentiometers rather than fully closed ones. I had asked the mechanical designers under Bud Deibele to make the frame weak enough that it would fail any shake, shock and transportation test. Then make it a little stronger to barely pass those tests. The pieces of the half frames were riveted together rather than bolted and to ship an empty frame required a cardboard insert to prevent distortion of the frame in shipment. All in the name of lowering costs.

In the assembly area kits for 10 plug-ins were issued to individual assemblers and after finishing these, the assemblers tested thems which led to fewer assembly errors - smoke or smells signal loudly that you have made a mistake! Even though it took some effort to convince the manufacturing manager, Al Peacher, that it would work and he made it a go.

During the design phases Jerry suggested that we make a many presentations throughout the company to Area Representatives groups. That paid off big, because as people learned about our project and our challenges they were more than willing to provide us with any help we needed.

As we reached the finish of the initial project we looked for product ideas for the future and that kind of planning always was done as a group effort. It led to dual beam scopes, additional storage scopes and various plug-ins, etc. to extend the 5000 series.

We also had noticed that some customers bought display sections only, to build those into their instrument systems. That became somewhat of a headache, so we designed a power supply for the displays and turned that idea into a new line of monitors, an extension of old the 600 series. That replaced the dormant 601 and 602 displays. Soon after that we split the group into two business units, scopes and displays.

We also considered a ‘plug-in warmer’ (like in the 530/540 series) but that was not really needed as the plugins were completely transistorized and therefore immediately ready to be used. But it made us consider additional possibilities like making a multi-meter and other measurement tools and signal source plug-ins. Soon this turned into a lot more and became the TM500 series using the same design and construction methods as the 5000 series and this line became another separate business unit.

Throughout all this Jerry Shannon encouraged a free flow of ideas; nothing was out of bounds to be discussed and tried. As an example, Matt Zimmerman in his spare times put together a transistor test plugin, which became the 5CT1. Throughout Jerry liked to take an opposing view of whatever anybody said. He was willing and able to take any position on any subject from design to politics and if you thought things were blue he would try to convince you they were red. I expect he did this to make sure we were strong in our positions and opinions. In doing so he taught us a lot about dealing with and managing people. He made it clear to us that we were as design engineers and project leaders standing in for the owners of the company, as we were making decisions, however small, that impacted the health of the Corporation. He also made it clear he expected us to make the right decision more than 80% of the time, but did not expect 100%, as it would take too long to get there. Risk was allowed.

Each of these product lines were successful and stayed in the catalog for about 20 years. This extract from the 1971 catalog is for the 5000 series. Click on the image to view the PDF. 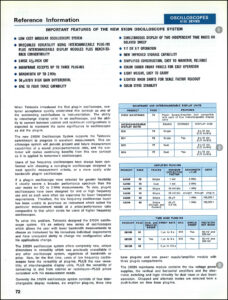