This January 23, 1946 Oregonian article features Howard giving a talk on radar organized by the IRE. 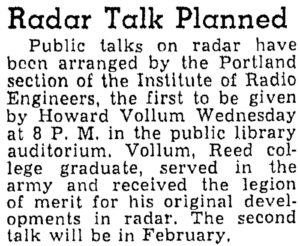 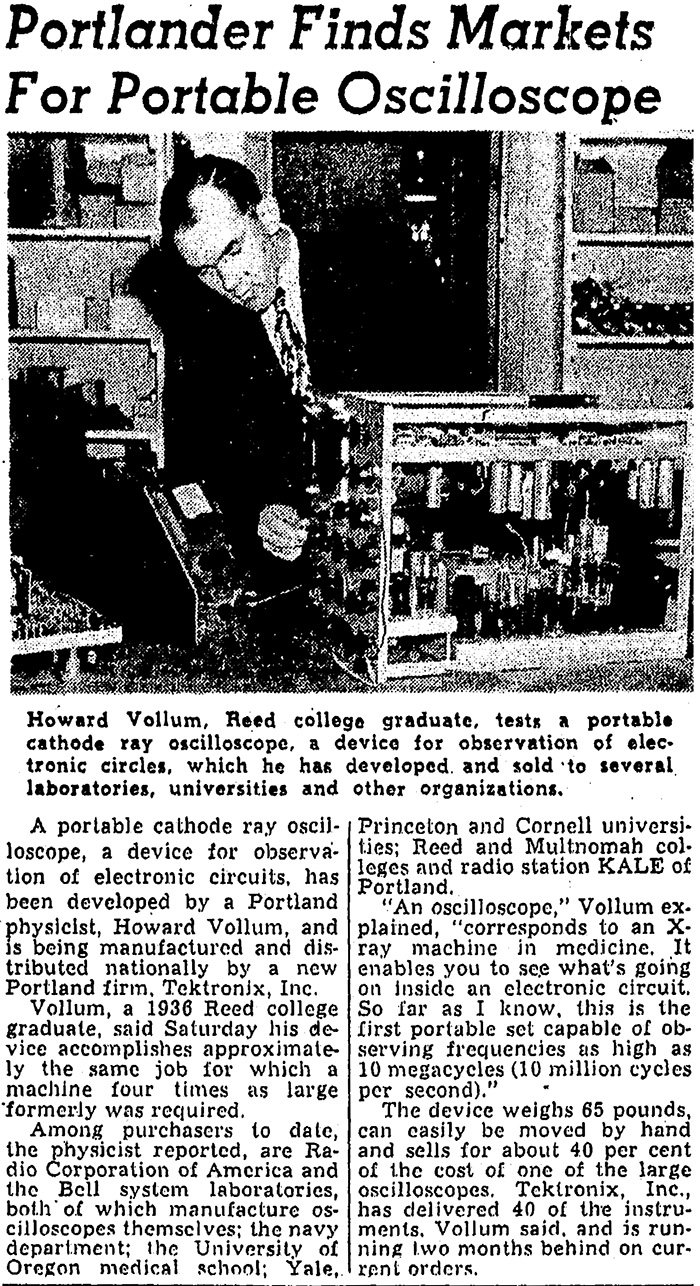 This March 1952 TekTalk provides some insight into his background and personal interests.  Click on the image to view the PDF. 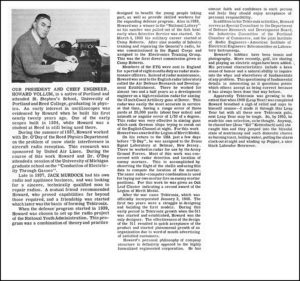 This August 1952 TekTalk features Howard at a company meeting in the Sunset parking lot who spoke from the back of a flatbed truck.

This excerpt from the 1987 Howard Vollum Anthology recalls one eyewitness account of the meeting (although the year is wrong). 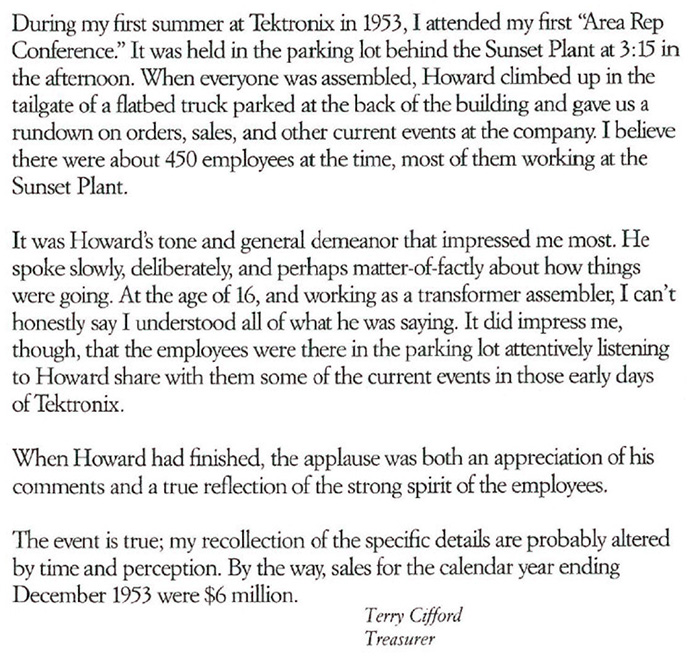 This article from the Sunday January 2, 1955 Star Tribune features 15 millionaires including Howard. 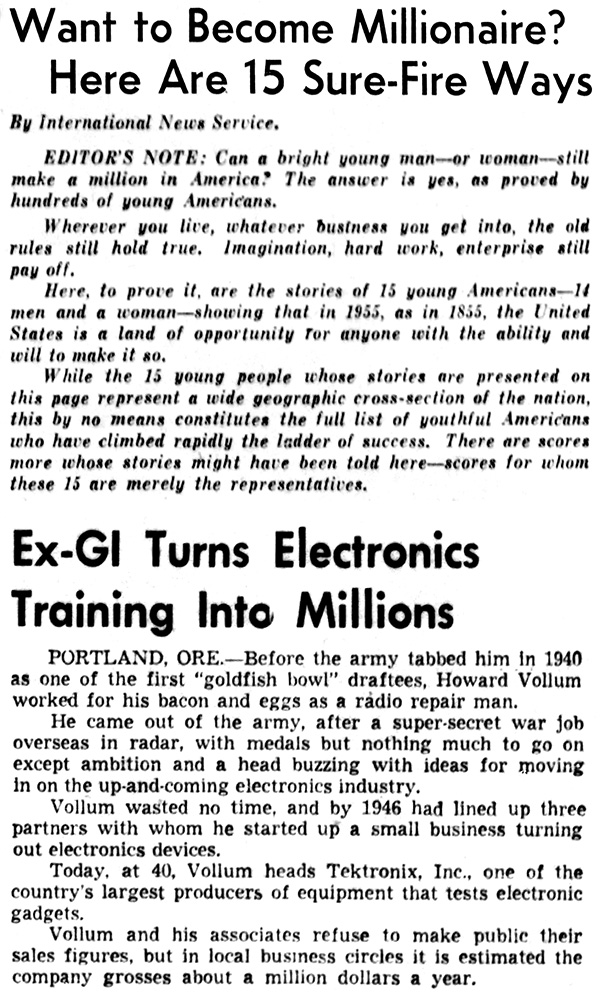 This March 3, 1955 issue of The Noblesville Ledger describes Howard's success at Tektronix.

This July 1955 issue of Proceedings of the IRE indicates Howard was the Director. 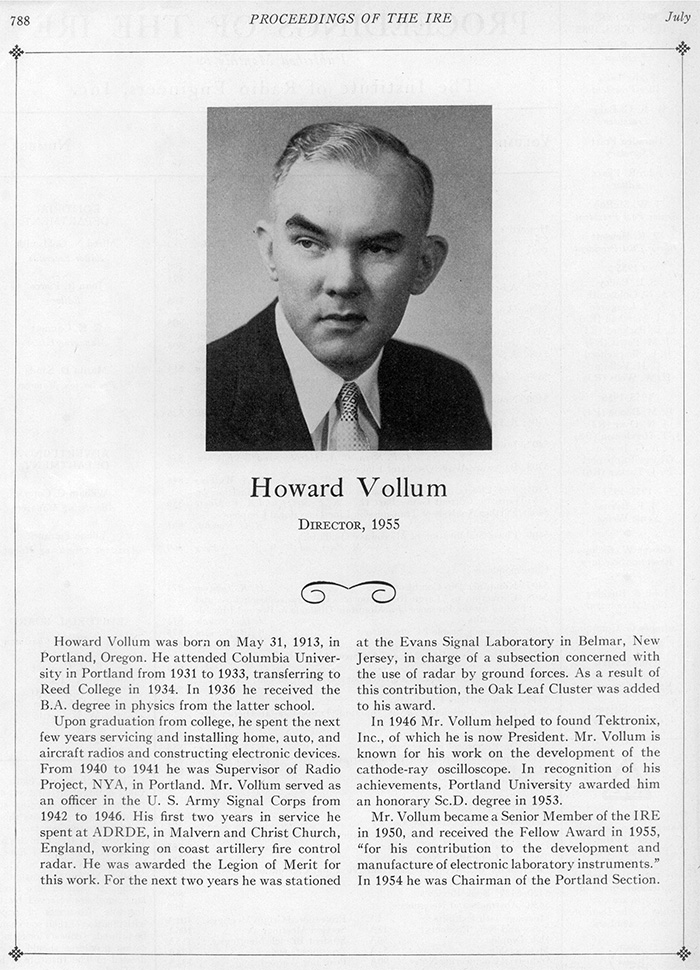 This October 1957 TekTalk features fundraising for relocating OMSI (Oregon Museum of Science and Industry) to Washington Park. It mentions that Howard was President of OMSI. 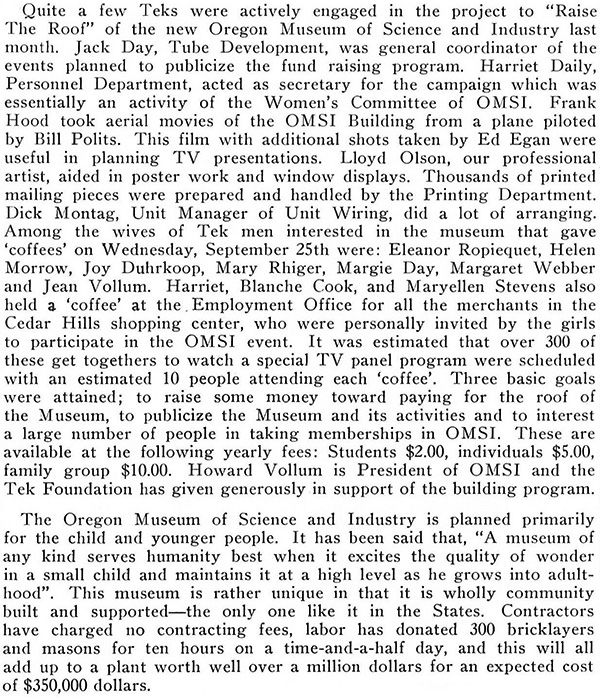 The date of this photograph of Howard is unknown as it also the location. 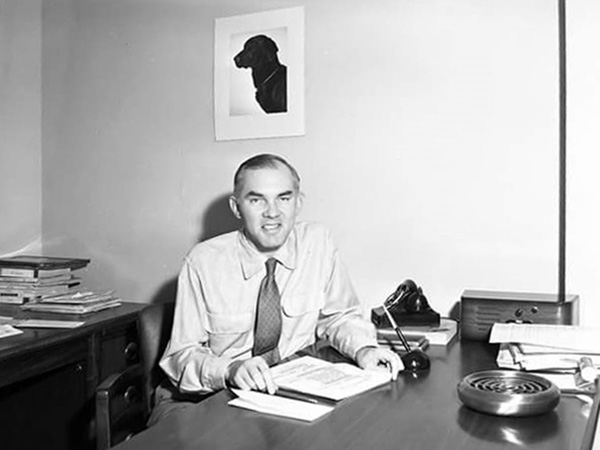 "At this point Arthur returned home and I visited the Physics Department of the University of California at Berkeley before flying to Portland for the most interesting visit of the tour which was to Tektronix, world leader in CRO (e.g. Cathode Ray Oscilloscope) manufacture, at Beaverton, Oregon.

Howard Vollum, President of Tektronix, collected me from my hotel in Portland and took me to the plant at Beaverton. He showed me over the factory, greeting everyone we met by their first names. He explained that the company manufactured its own cathode ray tubes. The established cathode ray tube suppliers could not produce tubes with the quality and features required for this key component in a CRO so Tektronix designed and made its own molded ceramic version with a flat screen on which there was etched a graticule to facilitate measurement. Another factor in the dominant position of Tektronix was that having made a variety of CROs for different applications, a basic carcass was produced along with a range of plug-ins to adapt the carcass to many of the applications. This was a more sophisticated arrangement than the contingency panels I had devised at Chico.

Over lunch Howard Vollum revealed that he owed his success to one person, namely A.E. Kempton, my former colleague at the Cavendish. Apparently he had been Howard Vollum's mentor when they had worked together at the Telecommunications Research Establishment (TRE) at Malvern during the war.

I was greatly impressed that Howard Vollum had retained an intense interest in technical developments. Indeed, in taking me to Seattle airport we were so absorbed in a technical discussion about a new gadget for use on cars that he missed the airport turning on the freeway and had to go on for miles before he could turn back. I got my onward flight just in time."

This photo shows Howard on January 10, 1964 when Tektronix was listed on the New York Stock Exchange. 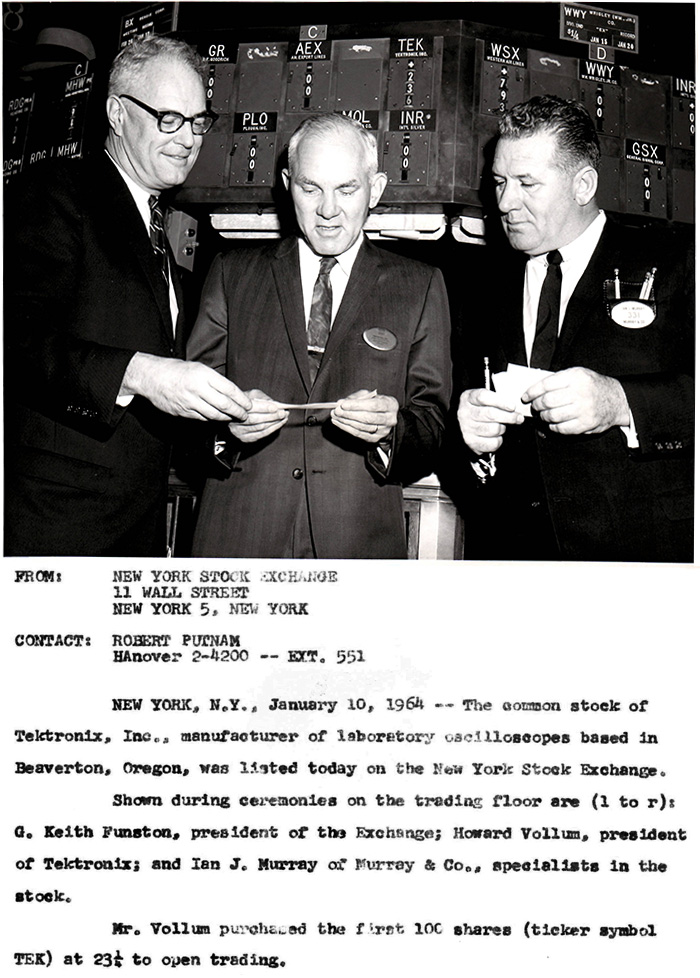 This excerpt from the "Winning With People: The First 40 Years of Tektronix" book describes the first board of directors. 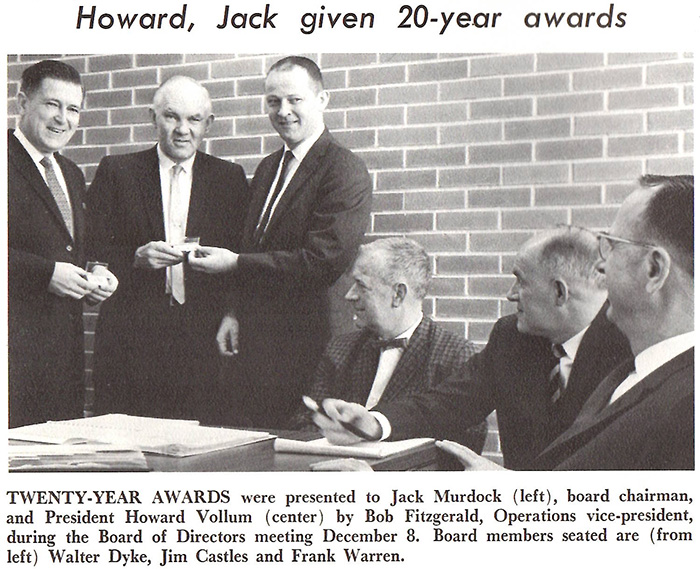 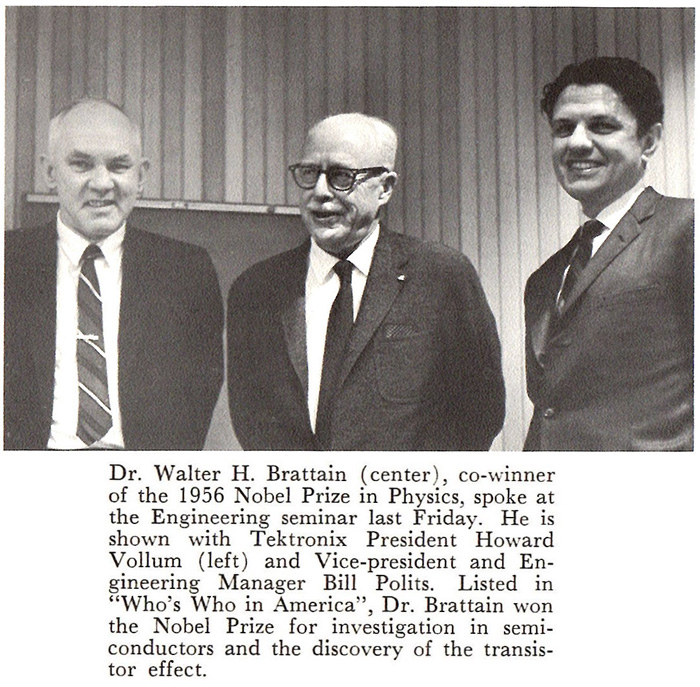 This photo shows Howard speaking at the Shareholder meeting held in the building 45 cafeteria on September 16, 1967. The Tektronix booth was setup to show employees and shareholders and was first used at the 1965 IEEE show March 22-25 in New York. 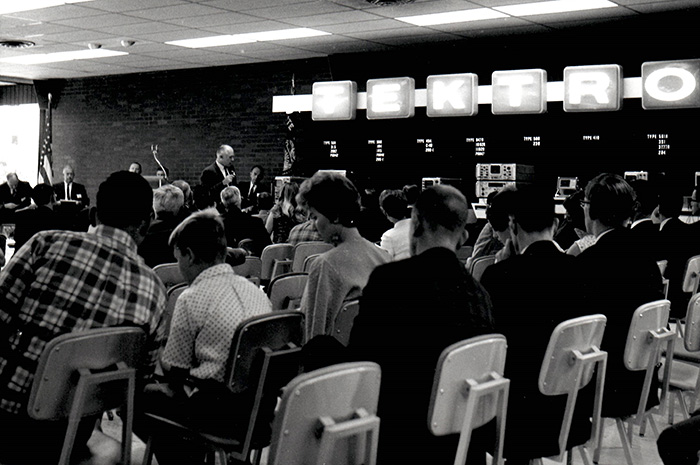 These two documents are transcripts of Howard's speech for new employee orientation.  The first is dated May 2, 1969 and the second is July 18, 1969.  Click on the images to view the PDFs. 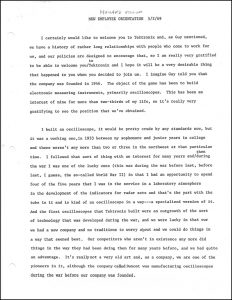 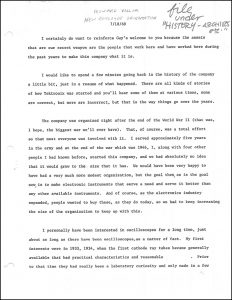 This September 10, 1971 TekWeek article announces Howard being named the Chairman of the Board. 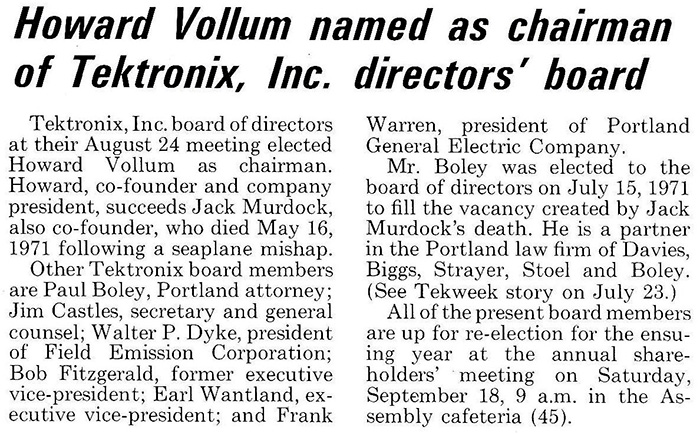 This September 25, 1973 Oregonian article features Howard receiving the Franklin Institute Howard N. Potts medal for outstanding contribution to the development of the oscilloscope. 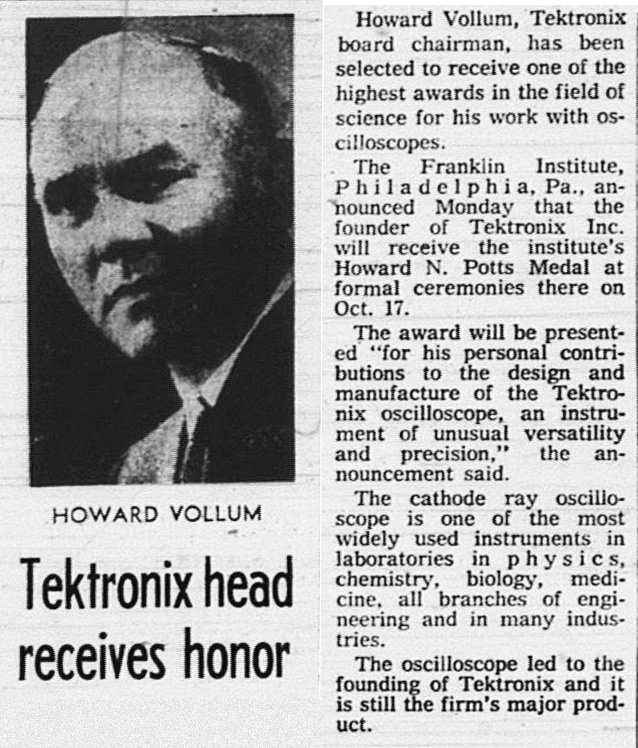 Click on the image to view the second article. 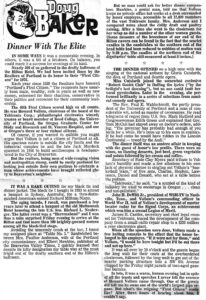 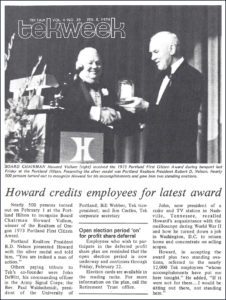 This April 6, 1975 Oregonian article describes the growth and challenges for Tektronix along with Howard receiving the Brotherhood Award from the National Conference of Christians and Jews.  Click on the image to view the PDF. 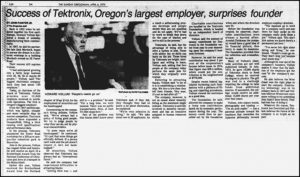 This April 18, 1975 TekWeek photo shows Howard and his wife Jean at the banquet to receive the award. 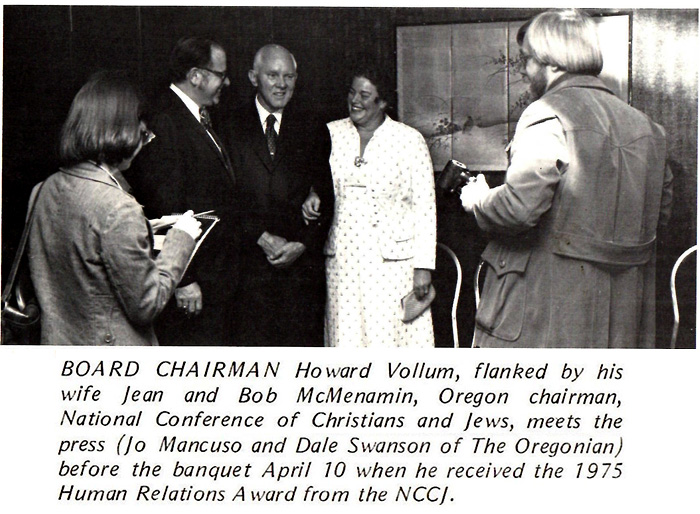 These photos of Howard are from a photo album of various employees taken by Helen Fried. 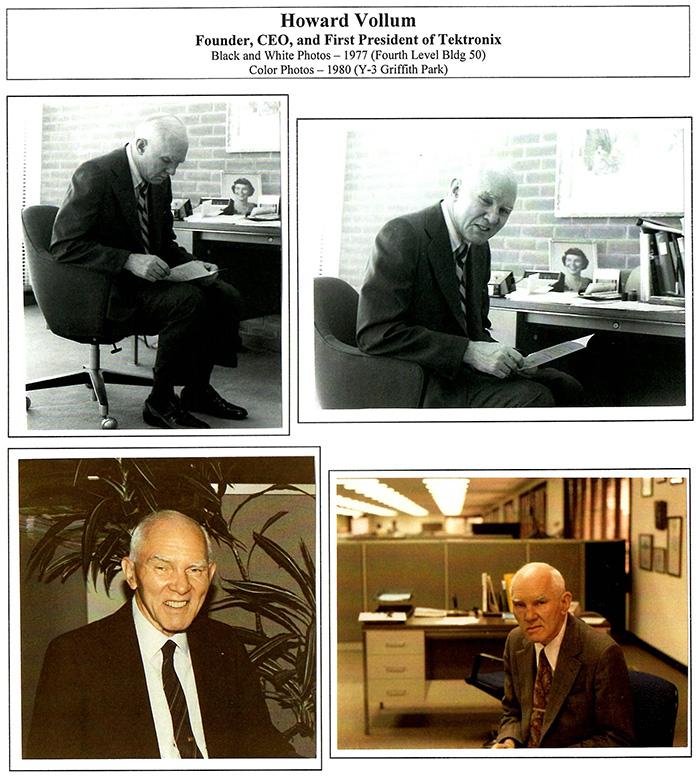 These business cards,  with Howard's five values, were passed out to employees, time frame unknown. 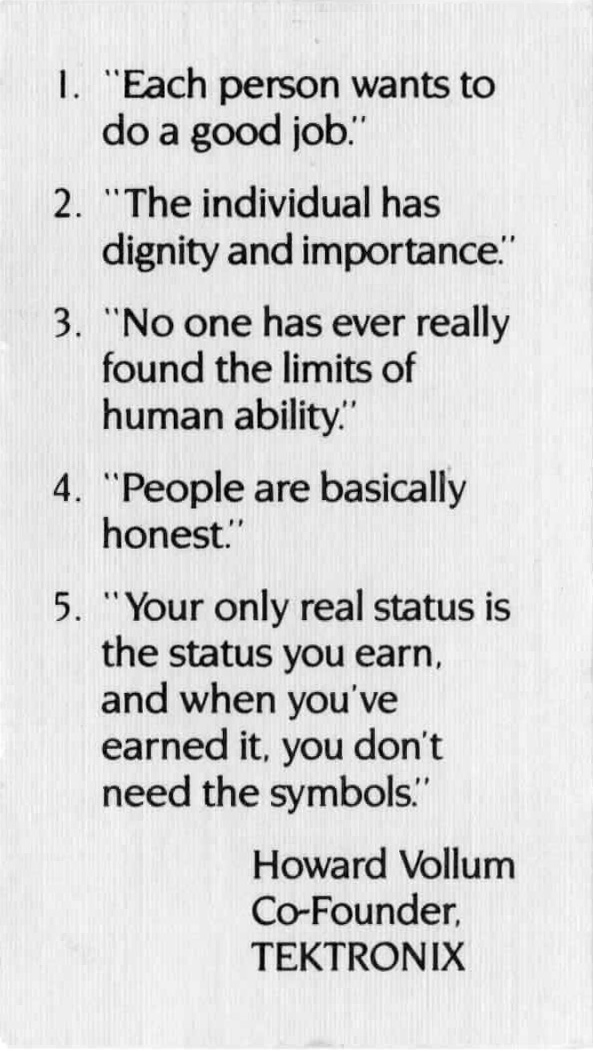 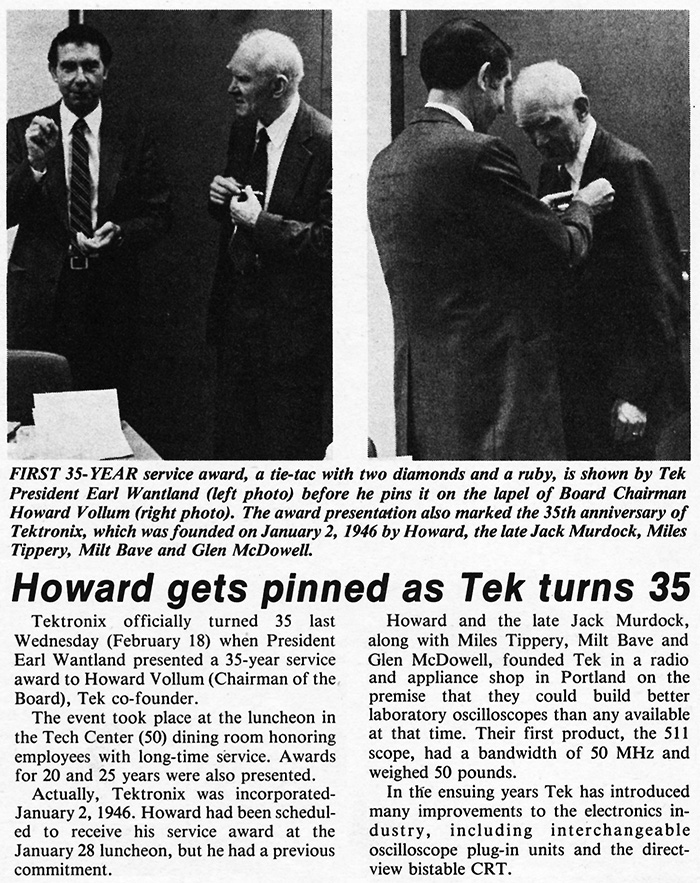 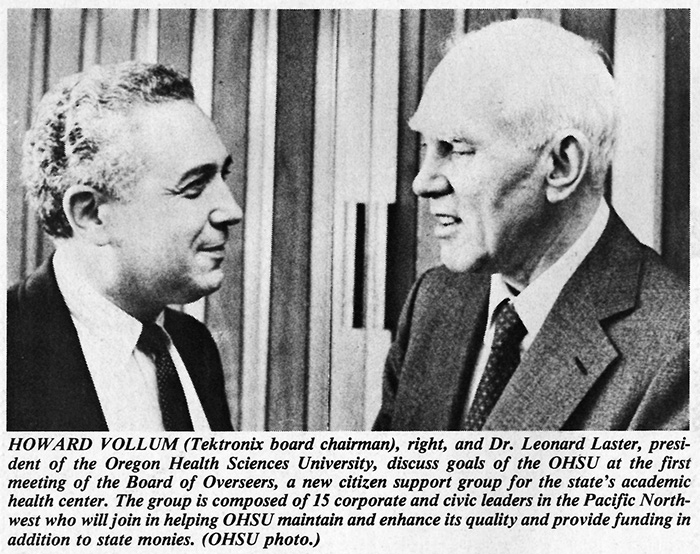 Howard received a number of awards in 1984. This April 1, 1984 TekWeek describes his receiving the IEEE Centenial Medal. Click on the image to view the PDF. 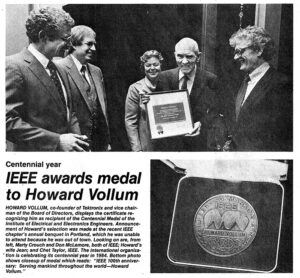 This June 1, 1984 TekWeek describes Howard and Jean being recognized for their philanthropy in the community. 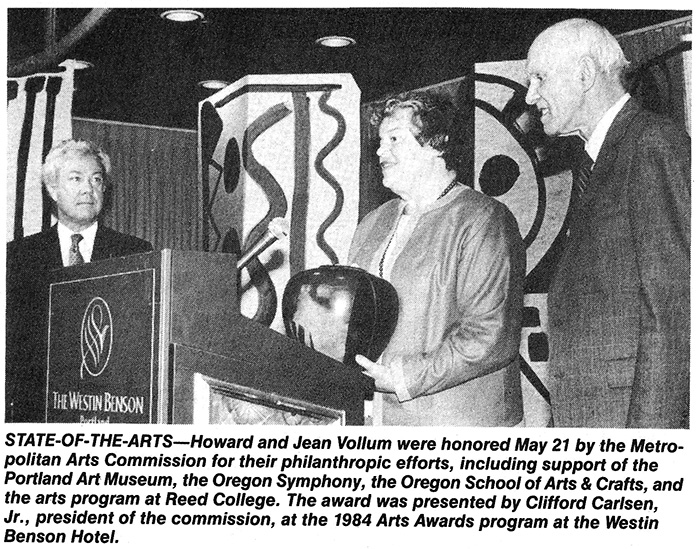 This June 22, 1984 TekWeek describes his receiving his honorary Doctor of Science from the Oregon Graduate Center. Click on the image to view the PDF. 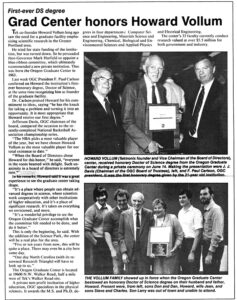 This August 24, 1984 TekWeek describes his receiving the Associated Oregon Industries Pioneer Award. Click on the image to view the PDF. 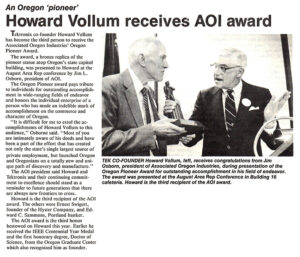 More of Howard Vollum at Tektronix continues on page 3. Here are a number of miscellaneous photos of Howard.