I don't know all the details of how his marriage came about, so will only provide a brief sketch here. About the second year of Tektronix, 1947, some young ladies became acquainted with our group, partly through the influence and connections of Mel Lofton and his wife. Of course, they naturally showed an interest in Jack and Howard as they were both very eligible bachelors. Jack seemed to enjoy the company of women to a certain extent, although he never did allow this enjoyment to proceed to long-term commitment. I believe that in the early years of Tektronix he felt he was not ready to make a such move, wanting to become better established in business first without the responsibilities of a wife and family. After the company became successful and he could easily afford to support a family, he seemed to be wary of getting into a close relationship with women for the reason, many of us guessed, that they might be considering his wealth instead of his person as a reason for marriage. I suppose that in modern vernacular one could say that as far as female companionship was concerned, Jack had a lot of hang-ups.

Such was not the case with Howard, who seemed to enjoy meeting and associating with women very much. However, he appeared to be quite concerned and careful that she meet his specifications including, among others, that she must be of the Roman Catholic faith. About two years after the company was started, he met Virginia Kettenbach; in those days commonly known as Kit. Kit was an enthusiastic young woman, tall, rather large, fun- loving, and given to practical jokes. She was a school teacher, very energetic, and obviously wanted to go somewhere in life. Her parents, I believe, owned a large grain storage company in either Saskatchewan or Manitoba, Canada. She and Howard were married around 1950.

About the time of their marriage Tektronix started becoming a very profitable company. It appeared that Kit was not interested in living in the frugal way the Vollums had grown up, and thought that as president of a new successful corporation Howard should act and live in a fitting manner. Soon Howard's lifestyle began to change quite noticeably; from a small Nash to a large Cadillac automobile, a little later a new magnificent house on Skyline Boulevard atop the West Hills of Portland with a beautiful view to the east and the west. At the same time he began to take his duties as president more seriously, becoming willing to enter into policy-making decisions, to leave his engineer bench when necessary for special occasions and to take part in various cultural activities. Although Kit never worked at Tektronix, at least not during my tenure, her obvious influence over Howard had a considerable effect on the direction of Tektronix. Fortunately, in spite of his position in the company, Howard retained a great deal of humility and graciousness toward subordinates.
Virginia and Howard had a family of several boys. She soon outgrew the nickname Kit and adopted the name Jean. Her influence must have been very well taken, for Howard remained as president of Tektronix until 1972 when he stepped up (or down, whichever you prefer) to the position of chairman of the board-a position that had become vacant with the death of Jack Murdock in 1971. Howard remained chairman until 1983. However, a number of years before then he ceased being responsible for the active management of the company but still continued interest in the activities, especially the engineering department.

This June 6, 2007 Oregonian article announces the death of Jean Vollum.  Click on the image to view the PDF. 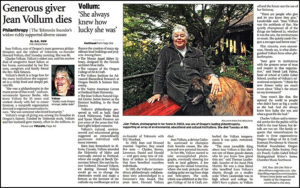