I began my career at Tektronix in January of 1967 as a Field Engineer candidate in the Syracuse, NY Region. I retired in 2006 as an Application Engineer working in the Mid-Atlantic Region. My LOS was a little over 36 years. For those of you are working the math (i.e 2006 – 1967), I left Tek and spent several years working for other companies. For those of us who left and came back to Tek, we were often given the label Retread, but I think most of us became better employees because of the experience.

For many of my years at Tek, I spent majority of time selling and marketing fringe product lines including Semiconductor Test Systems, Signal Processing Systems, Microprocessor Development Systems, and yes, even Numerical Control. Besides the Oscilloscope, I spent time selling Logic Analyzers, Spectrum Analyzers, Television Products, TDRs/OTDRs and Graphic Terminals.

With that background, I’ll jump back to my days as a Field Engineer (FE) trainee. The first couple of months were spent traveling the Region with experienced FEs. FE’s that I traveled with were: Bill Eppick and Bob Johnson (Detroit); Bill Demerlee (Syracuse); Joe Gayer (Pittsburgh); Jim Fischer (Endicott). Bill Eppick, Bob Johnson and Jim Fischer eventually took jobs in Beaverton with Tek. My time with Jim Fischer was especially memorable. I came away thinking “How am I going to follow that act!”. Jim is one of the wittiest persons I’ve worked with. I suspect those who interfaced with him in Semiconductor Test Systems would feel the same.

Lucky me, the Syracuse Region encompassed much of the Great Lakesarea. The region has its fair share of lake effect snow in January and February. On one occasion, flying back to Syracuse from Detroit late in the day, the Syracuse airport was closed because of heavy snow. The airplane turned around and landed in Buffalo which was a bit strange because Buffalo typically gets a lot more snow than Syracuse. The airline put us on a train from Buffalo to Syracuse. It was 4 or 5 AM before I got home. I’m sure those of us who travel a lot have had similar experiences but this one sticks with me.

The rest of FE training consisted of six months in Beaverton. Most FE trainees moved their families with them as I did. Many rented apartments directly across Jenkins Rd. from the Tek Campus. Being different, I rented a duplex SE of the city. Prior to moving to Oregon in March for training, I was told to expect a lot of rainy and overcast weather. Well, you could have fooled me; the Portland area went 70 plus days without rain that summer. It was also the first time I experienced temperatures above 100 degrees.

Most of our training occurred in Bldg. 74 on Millikan Way. The training in Bldg. 74 was mainly on oscilloscopes. A lot of class time was spent going over circuit diagrams on products such as the 540 series and the 647. The 453 was covered but since its circuitry was like the 647, we did not spend much time on it. Lab time was spent troubleshooting faults inserted by our instructors plus tweaking delay lines on the 545 non-B scopes for proper transient response. After spending a fair amount of time trying to tweak delay lines, I considered it more of an art form than science based. I was impressed how the manufacturing folks could do it in about a tenth of the time than I could do it.

We also spent a fair amount of timegetting trained on non-scope products by the folks in Product Technical Information (PTI) in Bldg. 50. Many of the people in PTI were Field Engineers on rotation from the field. As an aside, I joined PTI after several years in the field. Some product groups and support folks who trained us include: Spectrum Analyzers (Danny Welch) – The 491 was just introduced as well as the 1L5 plug-in for the 540 series. In TV Products – I recall Jerry Eastman was the technician. Sandy Sanford trained us on Signal Sources and was a great resource as a Tek historian. Earl Williams for Cameras who provide great background in general camera technology. Sampling Scopes (John Mulvey) – Probably the most technically interesting product for me. There were other trainers, but approaching 74, I’m not recalling the rest of them.

I should also note who’s who (as best I can remember) relative to the structure of Field Training. Tom Long was the manager of Field Training and PTI. Dave Weathers, as Tom’s assistant, oversaw FE training. In my opinion Dave set up a great training program. It was a shopping cart style program where we set up our own schedule relative to training on products other than oscilloscopes. It allowed me to complete my Beaverton training in five months instead of six. Our oscilloscope instructors were Chuck Miller and Bob Sadelek. And one person who all FEs will remember is Rose Avery. She helped facilitate our short term move and kind of mothered us through our stay in Beaverton.

Here are some of the other FE’s who were in my training sessions: Emory Harry, Angelo Domina, Bob Mahony, Denny Chamberlin, Thor Hallen, Paul Berkebile, Robin Morphew, Dennis Bayne, Jim Quinn, and Harry Sheppard. Emory Harry and Denny Chamberlin would eventually return to the factory to work. Thor Hallen did not spend much time in FE training. It was evident he was a technical talent above and beyond most trainees. Within a few months of starting FE training he transferred into engineering. 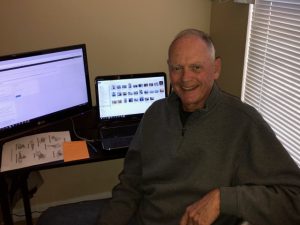