The 2400-series was Tekktronix' most advanced line of analog oscilloscopes. They were "analog" in the sense that the signal path from input to CRT was analog, but they were digitally assisted. A microprocessor generated on-screen readout and cursors, and performed auxiliary functions such as auto setup and auto measurements. The front panel was "fly by wire", in that the controls did not connect directly to the circuits they operated on. Rather, the controls were read by analog-to-digital converters and translated to the actual circuit controls by digital-to-analog converters under the supervision of the microprocessor.

As a way to further reduce cost, the 2245/6/7 team experimented with inexpensive front-panel switch technology with the goal of creating an oscilloscope that could be sold for less than $500. They used a membrane switch with 4 layers: a front bubble-shaped layer to create the snap when the switch was pressed, a back layer with metal contacts which were made when the switch was pressed hard, a spacer layer just in front of the back layer, and a middle later with metal contacts on the front for the initial press and on the back for the hard press. The result was a "knobless" (or nearly so) oscilloscope. The knobs below the CRT screen were left as is since they were part of the analog display circuitry.

This prototype oscilloscope was built by a group in building 50 by retrofitting a production unit with a new front panel and modified firmware. 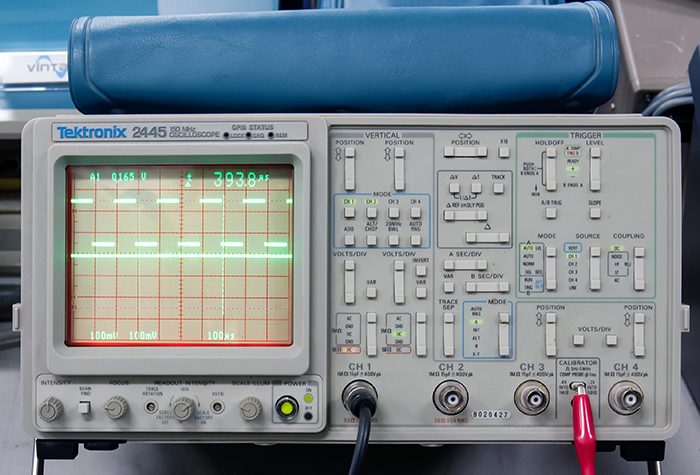 For each control there was an "up" and " down" section of the long buttons. These were pressure-sensitive - more pressure changed the accompanying function more rapidly.

After a few days of evaluation the team came to realize that it not feasible because although the snap contact worked fine, the hard-press contact did not, and it felt too firm at low operating temperatures and too mushy at high operating temperatures.  The design was also not popular with potential customers. Users just like knobs. Even the latest all-digital oscilloscopes have knobs. To our knowledge, only this one prototype was produced. The design was never put into production.

For the 2245/6/7/5A/6A/7A the design team eventually used more conventional elastomeric technology together with a very clever lighted contact designed by Bill Pooley and his team. The standard 2445 is shown here for comparison. 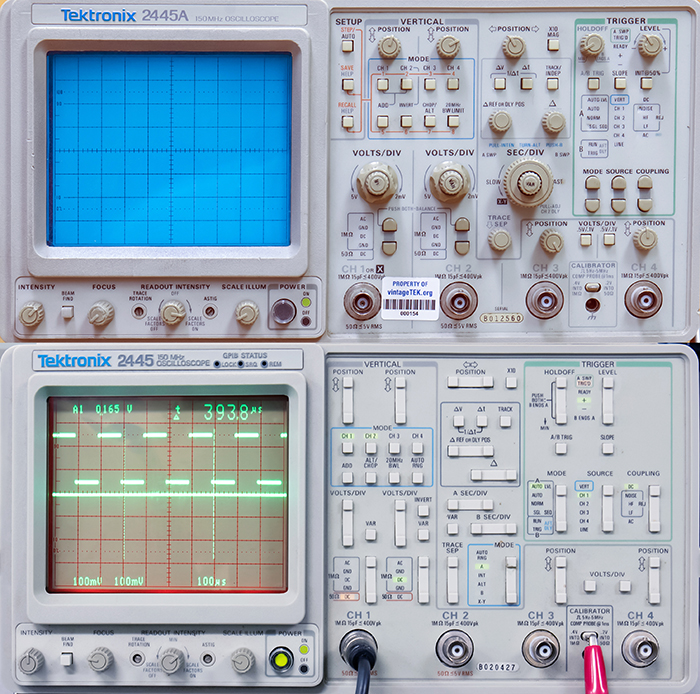 This is one of our most unique exhibits. Come into the Museum and try it out for yourself.