Sputnik was the first artificial earth satellite launched in an elliptical low Earth orbit on October 4, 1957, by the Soviet Union. It remained in orbit for three weeks when the batteries died and two months later fell into the atmosphere. This October 6, 1957 cover of the Oregonian covered the story. Click on the image to view the PDF.

The November 1957 issue of TekTalk has an article about the engineers at Tektronix monitoring the signals from Sputnik.  Click on the image to view the PDF. 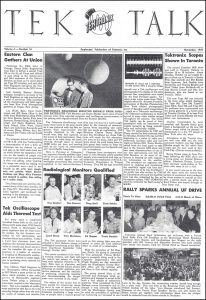 That same issue has this tutorial on listening to Sputnik.

There are more articles on Sputnik on our Cliff Moulton page.