Stan Griffiths was hired into Tektronix in 1960. This photo is of him working in the Van Nuys Service center. 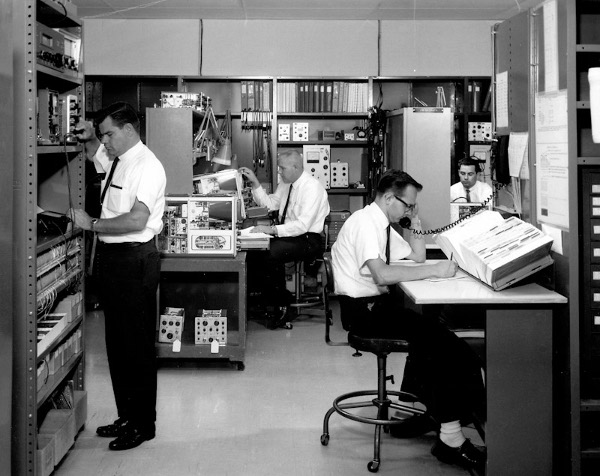 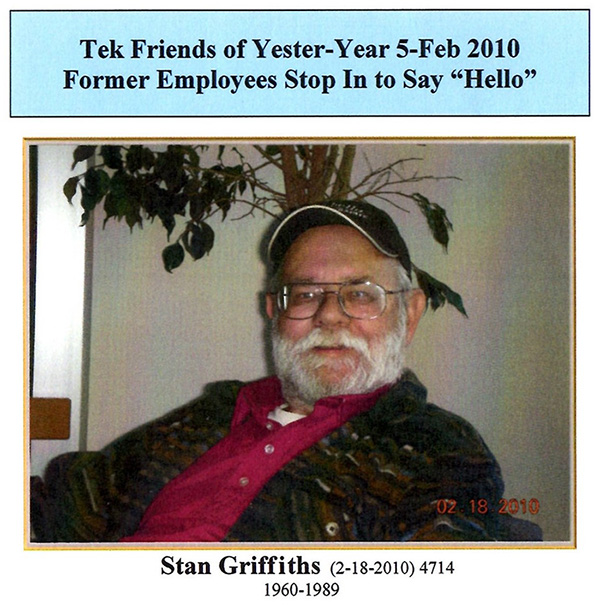 Stan started at Tektronix in calibration and repair in 1960. This is his photo from the employee album. 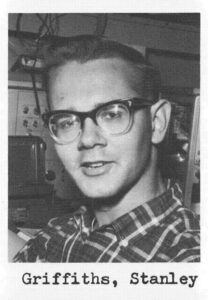 Stan left Beaverton as a calibration and repair technician for the Tektronix Boston Field Office.   In 1966 he co-started an independent mobile calibration lab in Los Angeles in 1966.  He returned to Tektronix and worked out of New Hampshire in 1970. In December 1973, Stan was working in Bldg 50 as Service Support. In May 1978, Stan was still in Service Support but in Bldg 58. In November 1979, Stan was listed in TM500 Marketing in Bldg 94, Walker Road. In March 1986 and July 1987, Stan was in the Portland Field Office on Nimbus Drive. In August 1988 he was listed in the Microwave and RF Instruments Division (MRI) Western Region-Portland Field Office at the same location. Stan retired in 1989.

After retirement, Stan started a web site with very helpful information about Tektronix products. His life and another recent photo were also on the website.  The website has been discontinued but contained this personal excerpt.

I had a long and successful career with Tektronix beginning in 1960 and ending in 1989. There was a 3 year break in it from 1966 to 1970 during which time I was one of the founders of a service company in Los Angeles, CA that specialized in servicing only Tektronix instruments. At Tektronix, I was involved in the checkout of new instruments on the production line or the servicing of field returns from 1960 through 1966. My later jobs at Tektronix included Sales Engineer in the Boston, MA area and later, first level management in Service Support where service plans for new instruments being introduced by Tektronix were developed. I also sold microwave Spectrum Analyzers for Tektronix in the Pacific Northwest from 1980 until my retirement from Tektronix in 1989.

In about 1985, I had the opportunity to acquire about a dozen old tube-type Tek scopes from a local university. I fixed some for the university and they gave me the rest as payment. I found I really enjoyed fixing up the old scopes that I knew and remembered so well from my previous jobs at Tek, and decided I would start a small collection of classic Tektronix scopes and plugins.

Since that time, my collection has gone completely out of control and now, in 1998, numbers over 500 instruments, most of them older than 1970. About 60 of them are restored to museum condition. About 200 of them are planned restorations, and the rest are either spares, which I will fix and sell to other collectors, or parts instruments which will be sacrificed to fix other instruments. I have also amassed a LOT of parts that can be used for the repair and restoration of other instruments. Please see the section of this web site that lists some of the spare parts I have for sale.

The long term plan for my collection is to eventually find a location where it can be put on display for public viewing. Guests are welcome to view the collection now which resides in my 7 car garage at my home. You need to call first to verify that I will be available to personally conduct a tour.

As he mentioned, Stan had amassed a very large collection of Tektronix products. He wrote this letter to the Tektronix Retirees Volunteer Program which was published in the August 2001 newsletter. 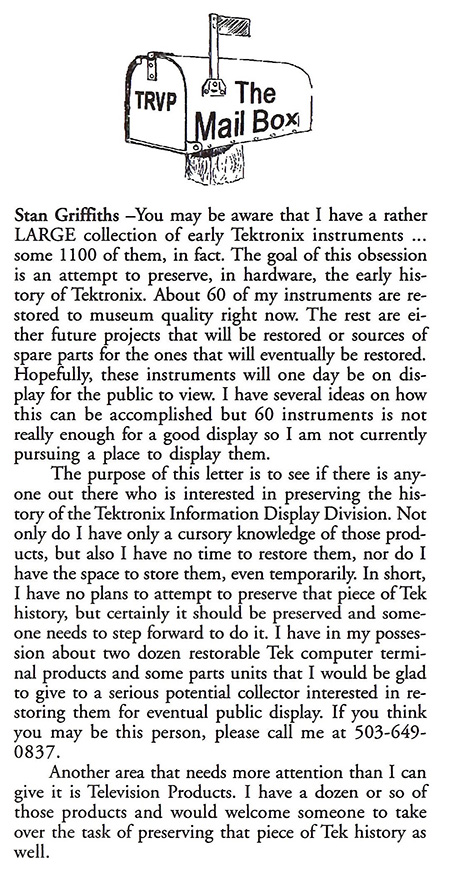 The Tektronix Retirees Volunteer Program published this story in the November 2001 newsletter. This article mentions Stan's book Oscilloscopes: Collecting and Restoring a Classic which the museum offers for sale.

The Tektronix Retirees Volunteer Program followed up with this story in the February 2002 newsletter. Click on the image to view the PDF. 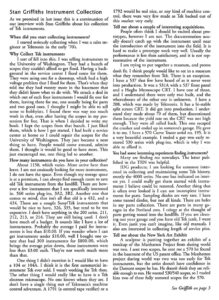 In 2011, Stan Griffiths and Ed Sinclair founded the vintageTEK museum. This photo was taken on May 31, 2013 at the 100th birthday celebration of Howard Vollum at Tektronix. 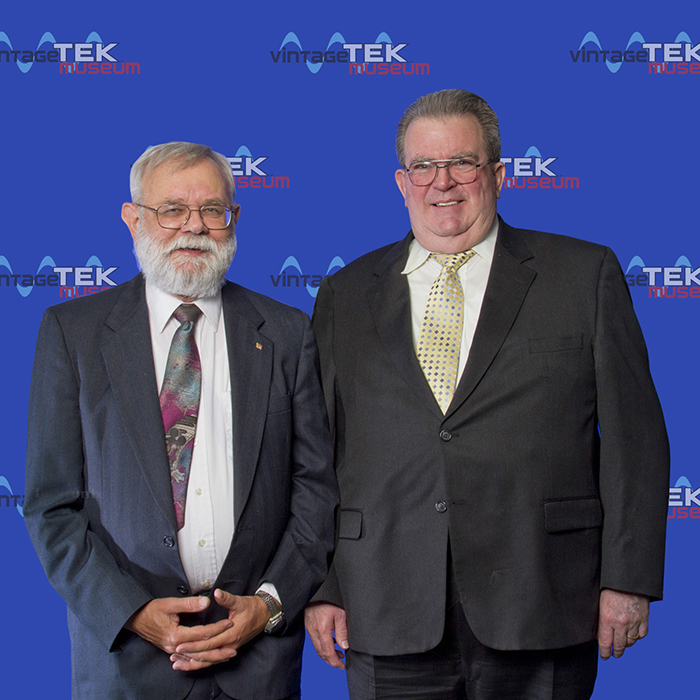 This photo was from the story Tektronix Museum Celebrates Trailblazing Era of Pre-Digital Technology published in the Beaverton Valley Times on August 15, 2013 Pamplin Media website

This photo was Stan's last visit to the museum on August 15, 2019 to tour his long time friends Judy and Ed Hattendorf . 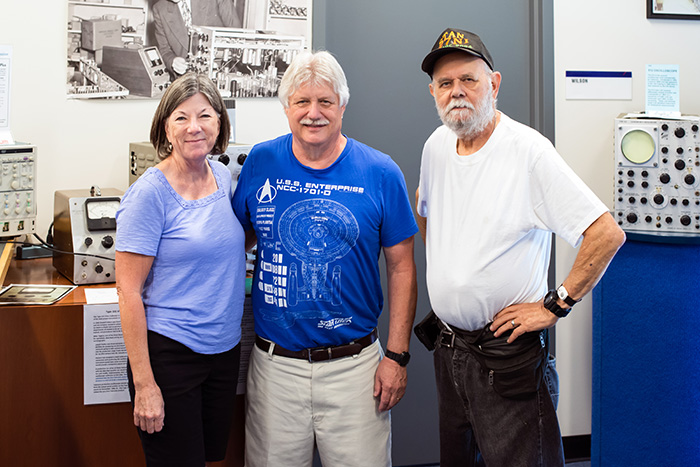 Stan died on January 28, 2020. We are grateful for his energy, passion, and dedication for co-founding this museum.