Tektronix was bursting at the seams in the Hawthorne plant.  They were running three full shifts, there was inadequate parking for employees, and they simply needed a larger facility.  The choice was made to move west, but not far enough to be out of the Bell Telephone System.  Their choice for the location of the new Sunset plant was near the intersection of Highway 26 and Barnes Road.  The first groups moved into the new facility early in 1951 but it was obvious by then that they needed even more room so work progressed on expansion and adding new buildings.

This ad for the new Sunset Plant appeared in the November 1951 issues of Proceedings of the IRE. Click on the image to view the PDF.

This photo shows the largest single order to date of thirty 511D oscilloscopes shipped to Hughes Aircraft in Culver City, California, on November 7, 1951 from the Sunset plant.  The individuals are (left to Right) Paul Billes, Waldo Johnson, and Dale Holiday. 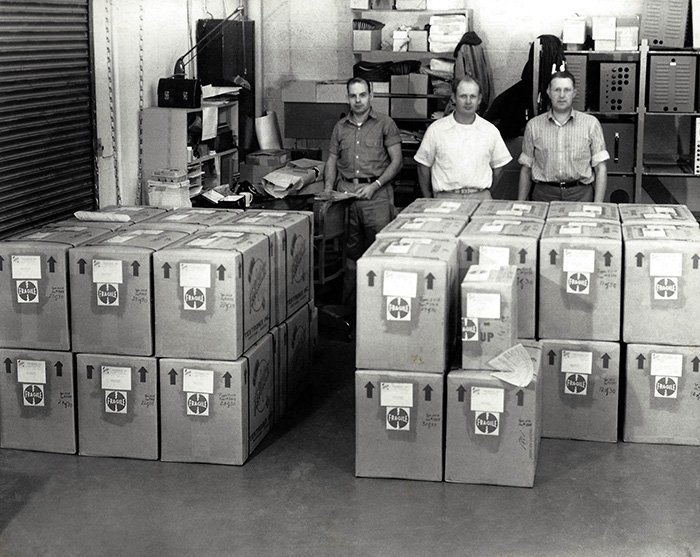 This January 1952 TekTalk article describes Tektronix customers and partners outside of the United States.  It also references the increased capacity at the new plant (Sunset). 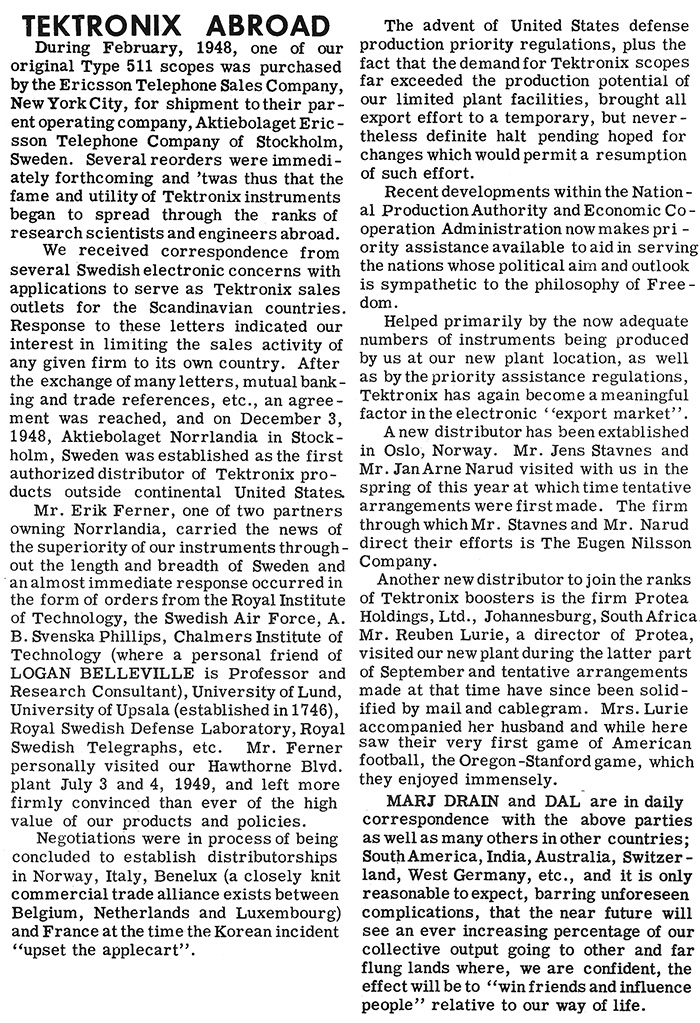 This undated export distribution brochure provides a nice summary of Tektronix along with a listing of the overseas distributers.  Click on the image to view the PDF. 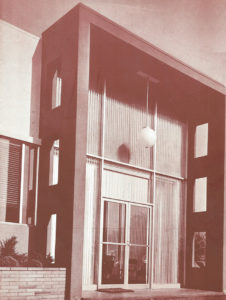 These two 1953 photos shows the U-shaped expansion of the original building 81 which include a Quonset hut, and the CRT/Engineering building 86 to the north. 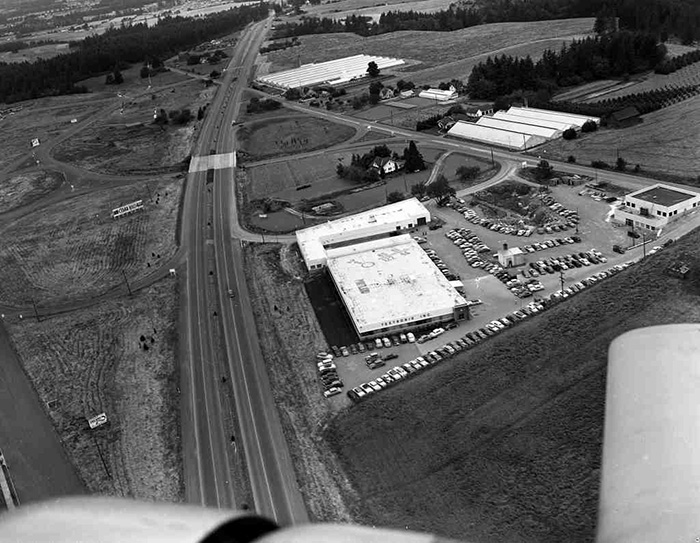 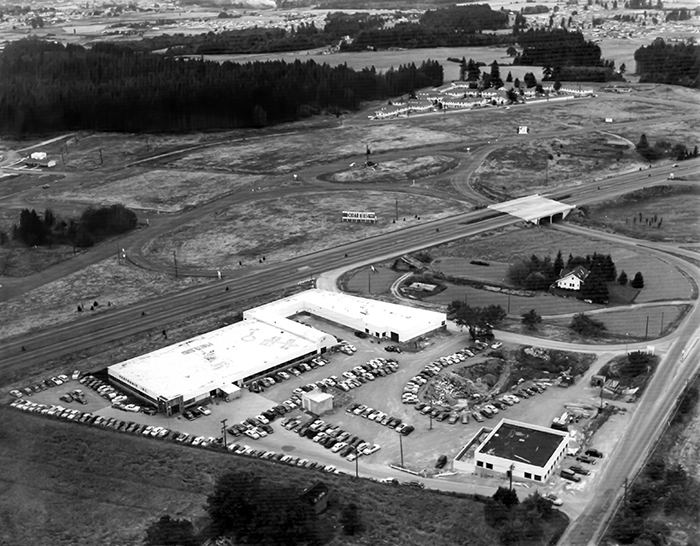 This directory of the original Sunset plant building 81 was included in the very first issue of the yet unnamed TelkTalk from May of 1951.  Click on the image to view a larger size PDF. 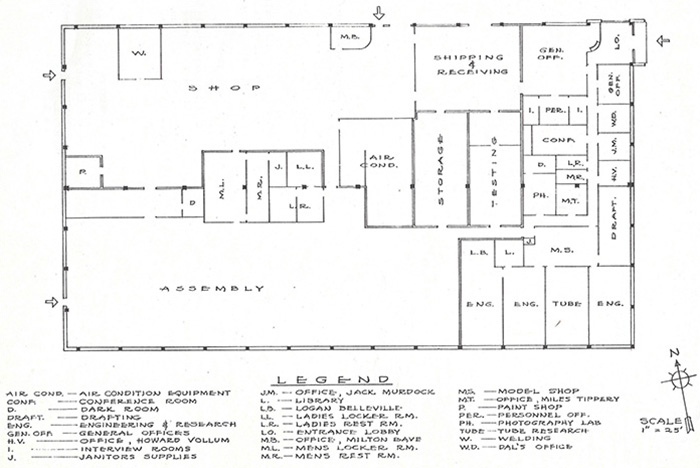 This September 23, 1951 Oregonian article features the move to the Sunset building.

This directory of the Sunset plant was part of the You And Tektronix employee handbook.  The A.N.R on the lower right corner is Arnold Rantala, a draftsman and a cartoonist. Click on the image to view a larger size PDF. 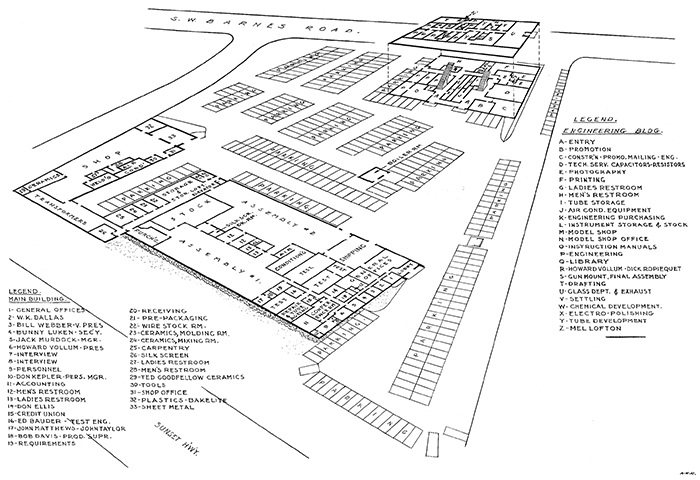 This article and map from the July 6, 1954 TekTalk describes the remodel of the building. 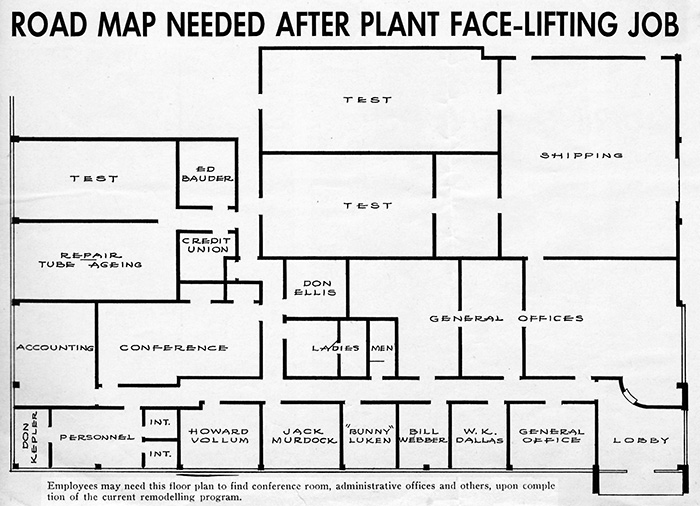 This November 5, 1954 TekTalk article describes expansion of the building to accommodate growth in assembly and shipping. 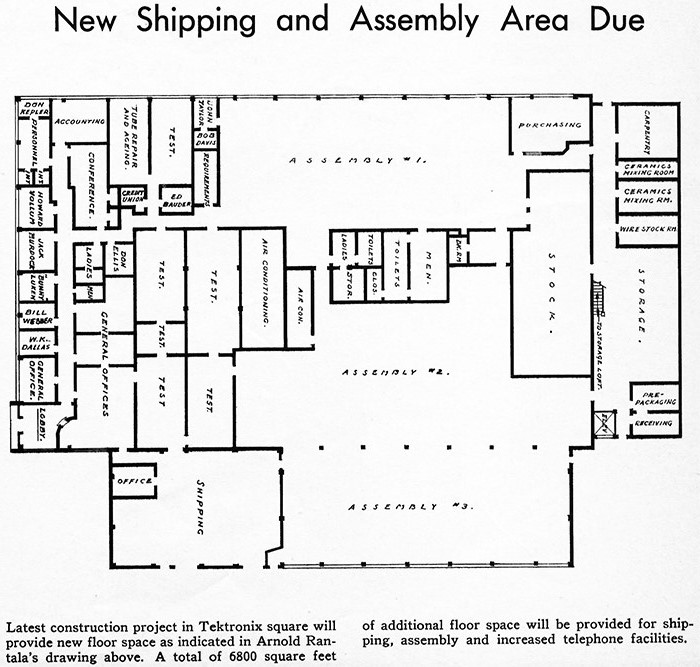 These photos show some of the key employees in their offices at the Sunset plant as listed on the above directory.

A more complete set of 50 photos is in this album. Click on the image to view the PDF. 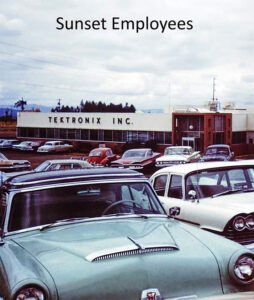 Building 86 was first expanded to the West. 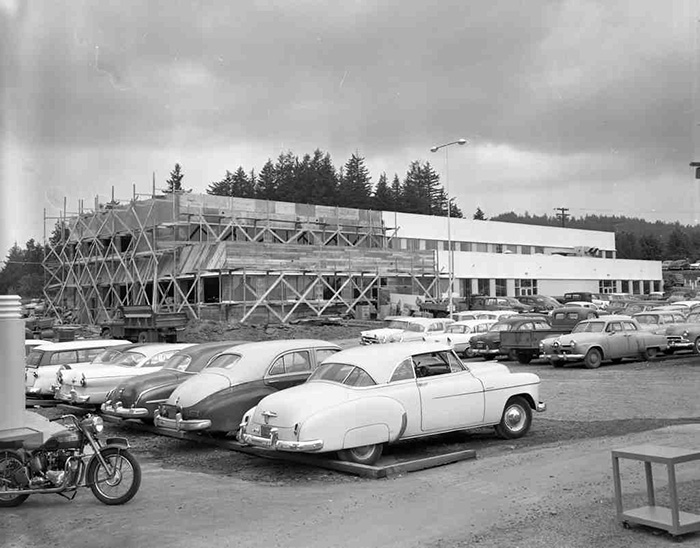 This photo shows west expansion of building 86 and increased build-up of the surrounding area.  The building in the upper left corner is now the Beaverton site of the Department of Motor Vehicles. 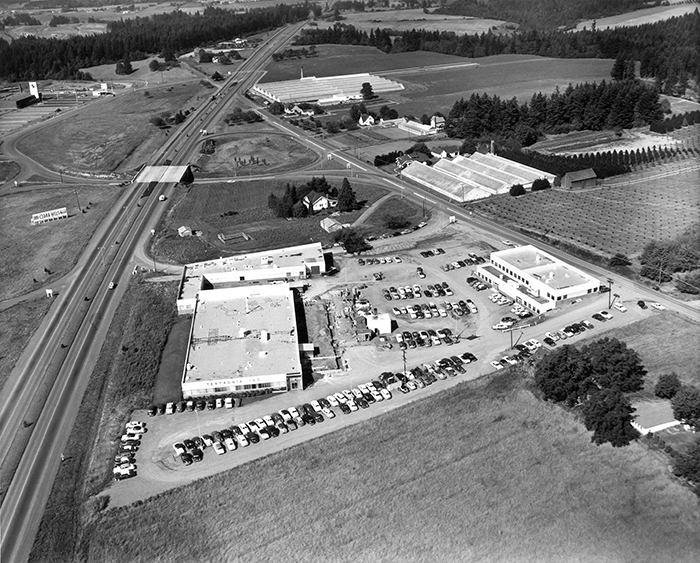 Building 81 was further expanded by adding a second Quonset hut.  They had a loft which was used for storage. The original Quonset hut on the left had an elevator to reach the loft. 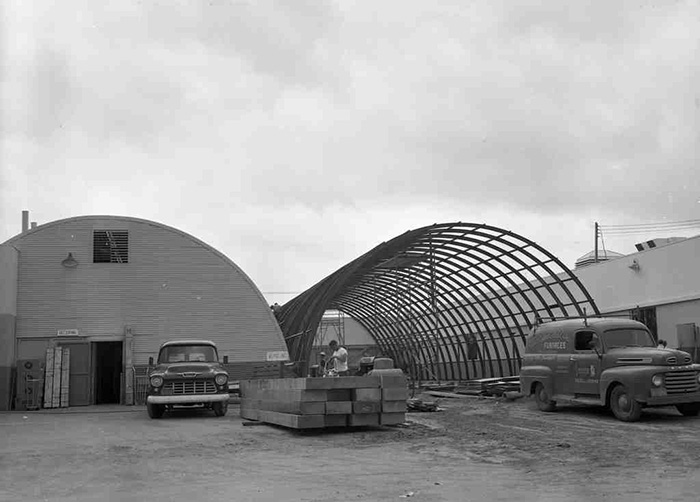 This photo shows the near final expansion the Sunset plant including parking lot to the east, additions of the Quonset huts and the front of building 81, and the expansion of building 86 just to the West. 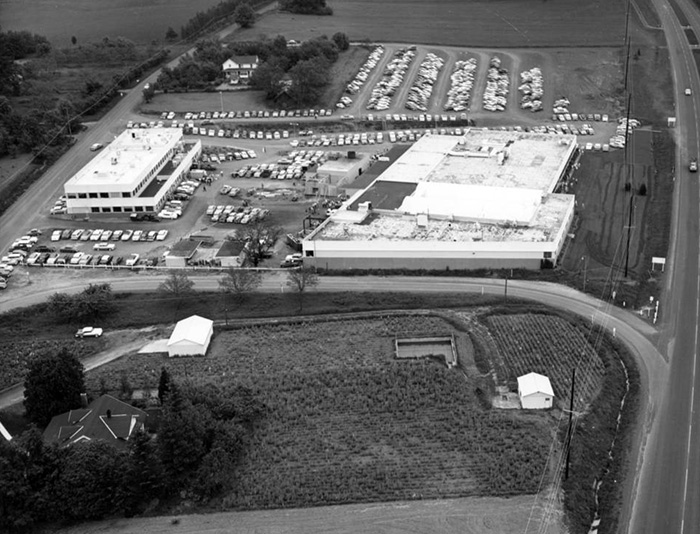 This photo shows the final expansion of Sunset plant with building 86 expanded to the east. 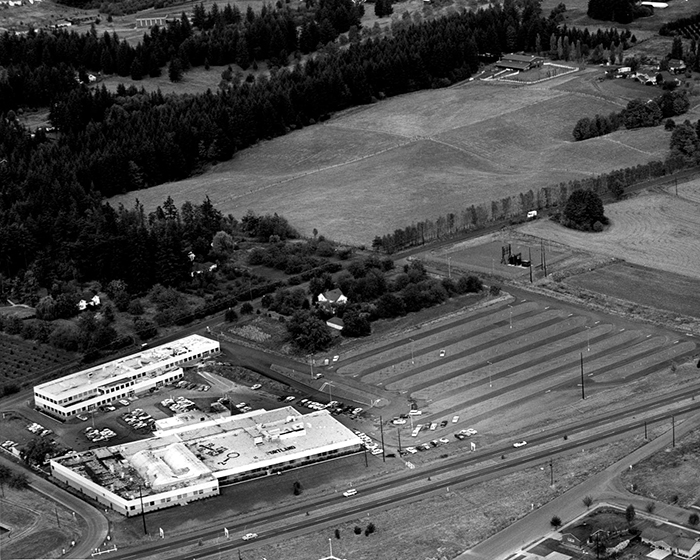 This May/June 1956 TekTalk article features a group of exchange students in front of the building hosted by Jack Day, second from the right. 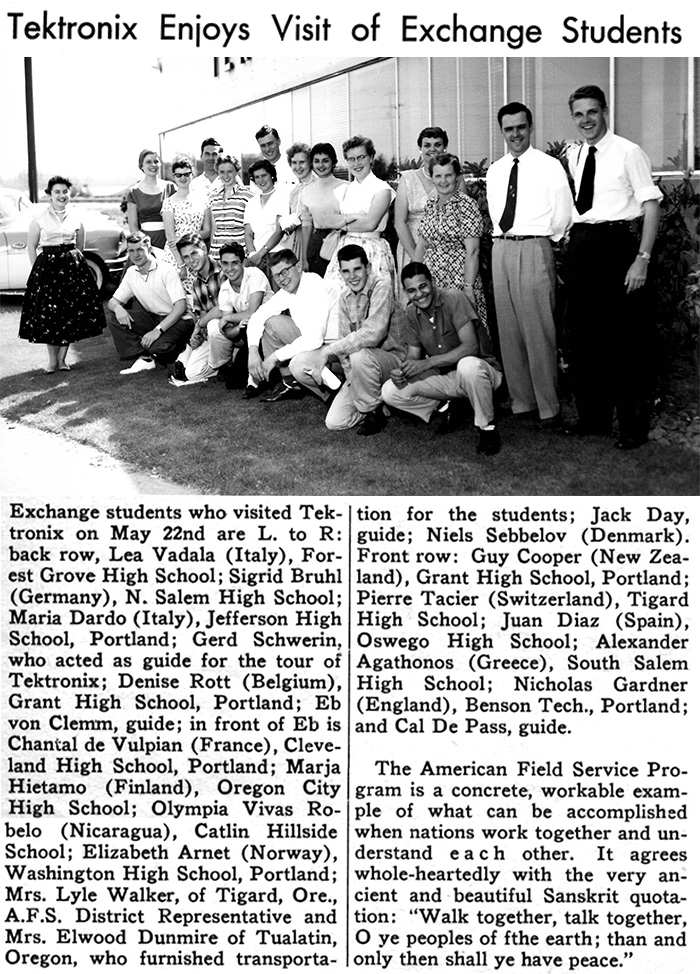 This 1958 photo shows how Tektronix appeared from Barnes Road.

This color photo shows the parking area in front of the main building. 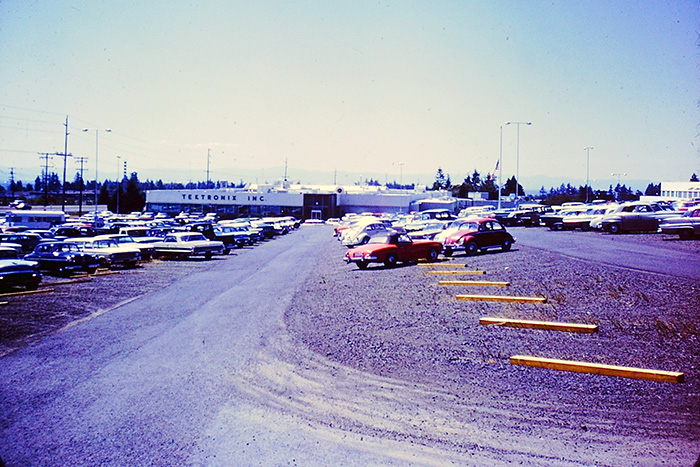 This color photo shows a closer look at the main building. 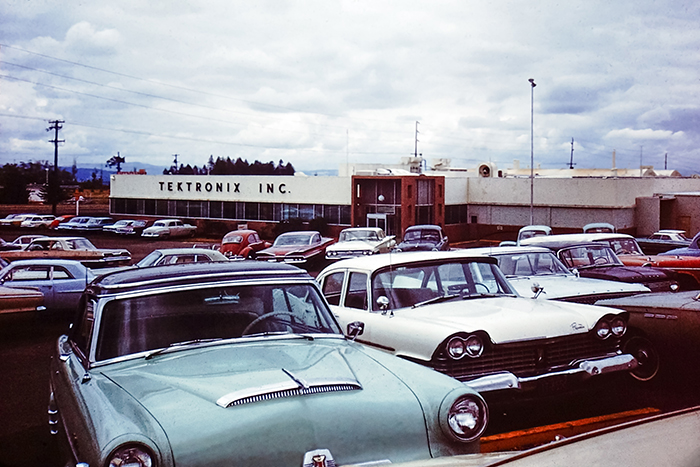 This aerial view of the Sunset plant from December of 1963 is prior to Highway 217 being constructed. 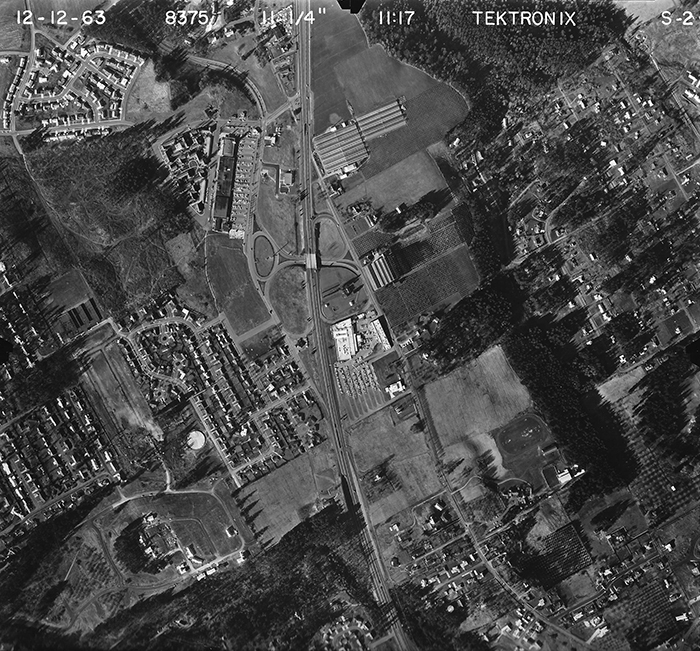 This January 21, 1972 TekWeek article features the construction of the 217 interchange. 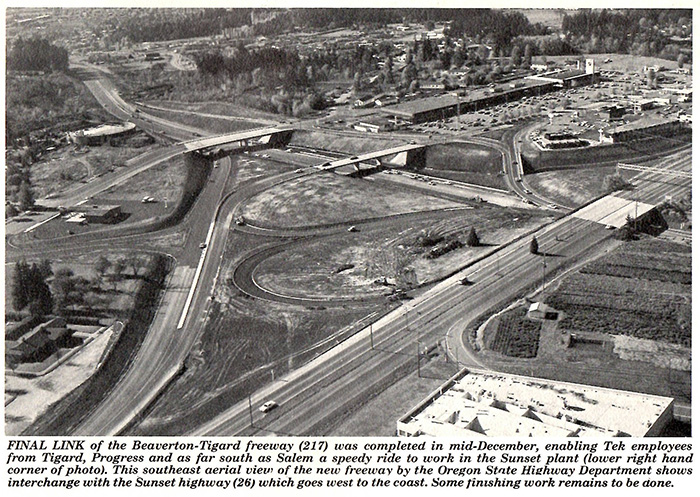 These photos show different portions of the instrument manufacturing operations.

These photos show different portions of the CRT manufacturing operations.

Even though Tektronix had been expanding to the new Beaverton Campus in the late 1950s, the Sunset plant was fully occupied, including modular trailers, until the move to Wilsonville in 1975. This January 18, 1974 TekWeek article discusses addition of the trailers. 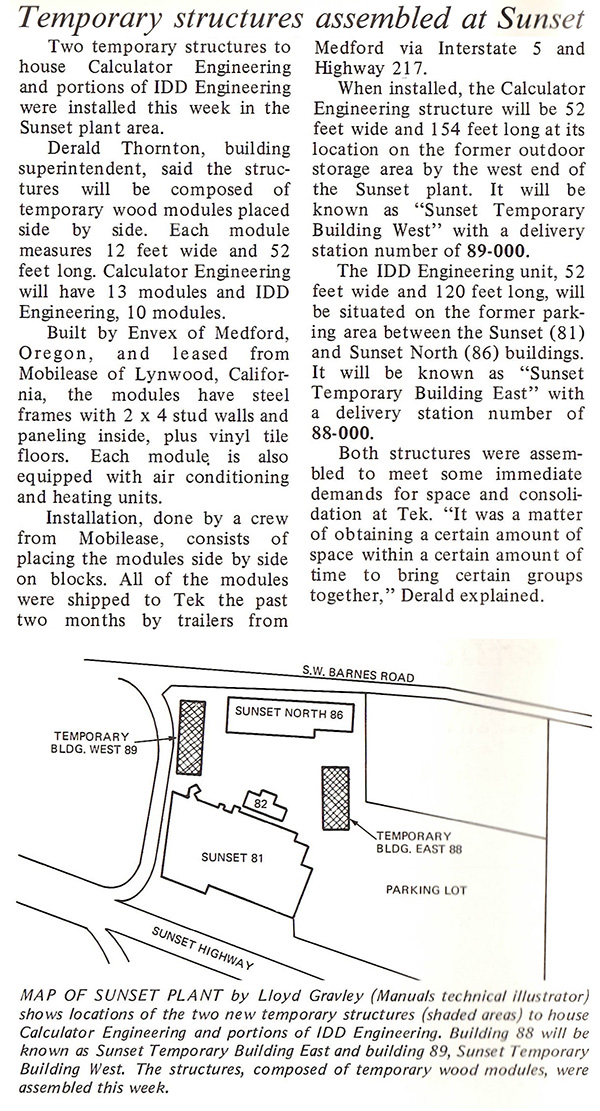 This image shows the comparison between the Sunset plant aerial photo taken in 1963 and Google Maps today.  Highway 217 had not been constructed in 1963. 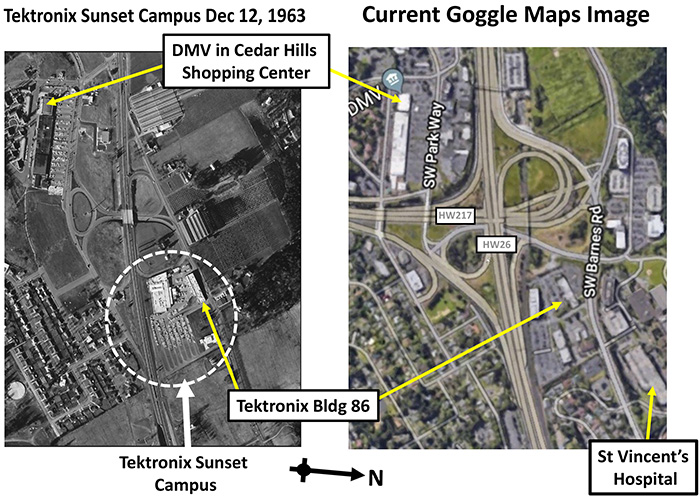 This July 17, 1981 TekWeek features the improvement to the 217 interchange as seen in the Google Maps photo. 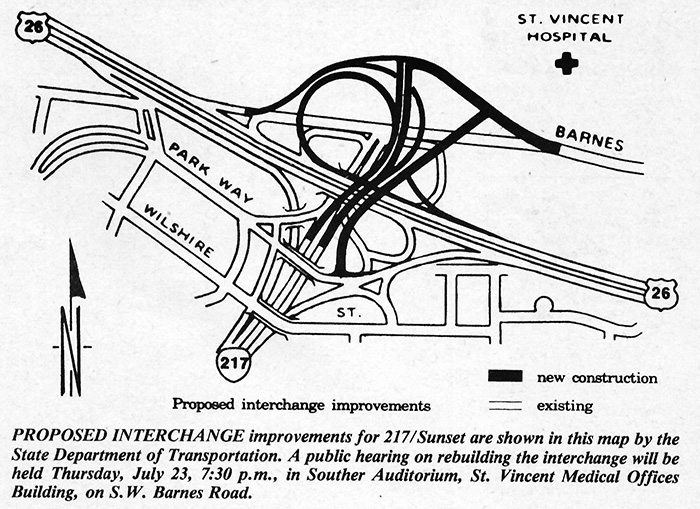 This undated TekWeek article bids a fond farewell to the original Sunset switchboard.

Tektronix disposed of the Sunset property in an exchange for Walker Road as described in this December 23, 1976 TekWeek article.