The Wilsonville site opened in 1975 and was home to the Information Display Division (IDD) in building 60.  These groups had remained on the Sunset Plant site which was so over crowded that they brought in portable trailers.  This March 22, 1974 TekWeek announces the intent to purchase 260 acres in Wilsonville. 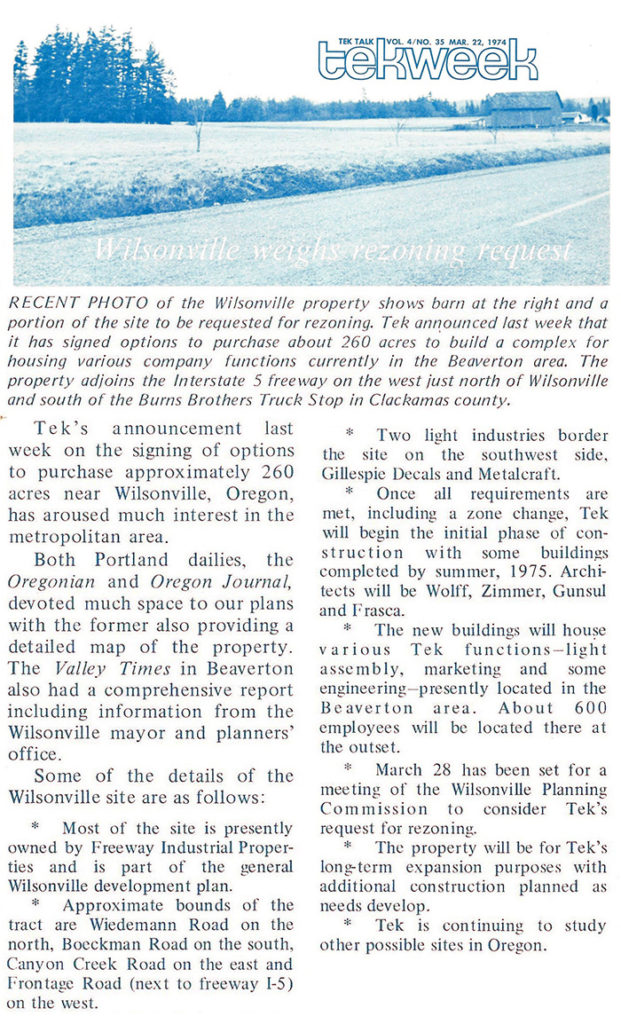 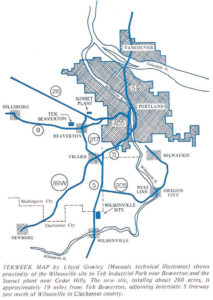 This May 17, 1974 TekWeek article features City Council's approval of the purchase of the Wilsonville site. 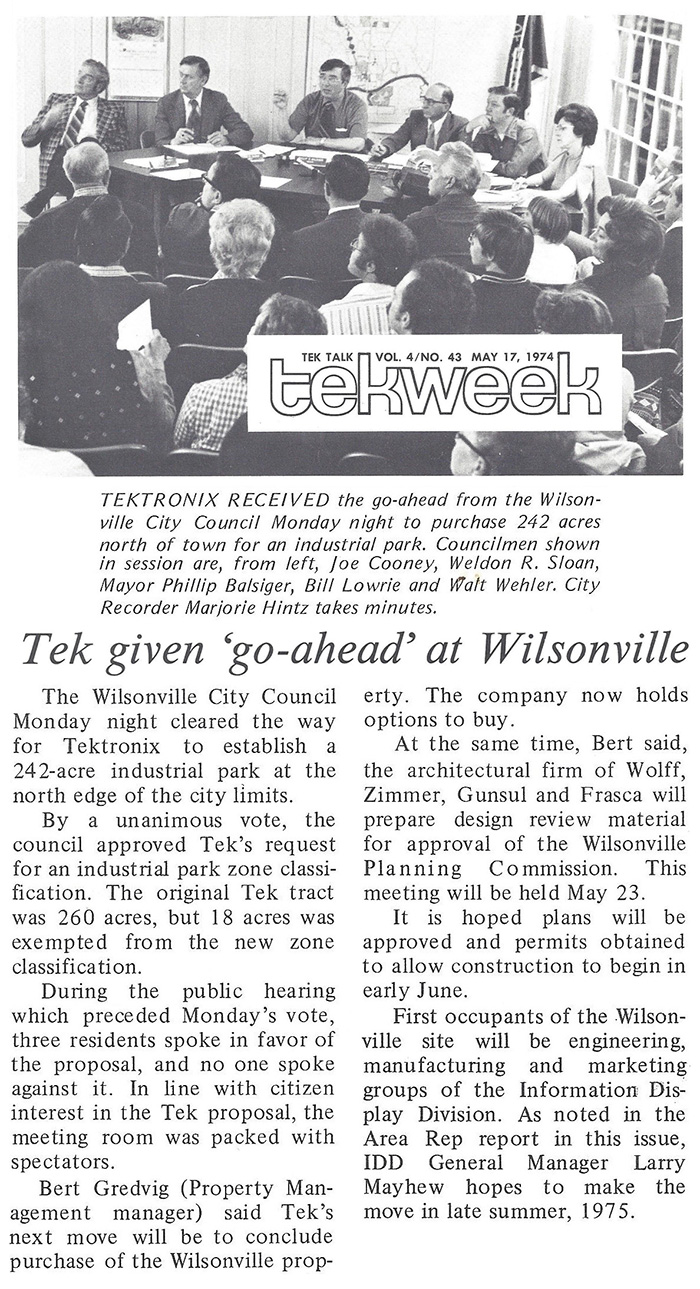 This November 8, 1974 TekWeek article features the construction of the Wilsonville site.

This August 15, 1975 TekWeek article describes the upcoming move in to the facility. 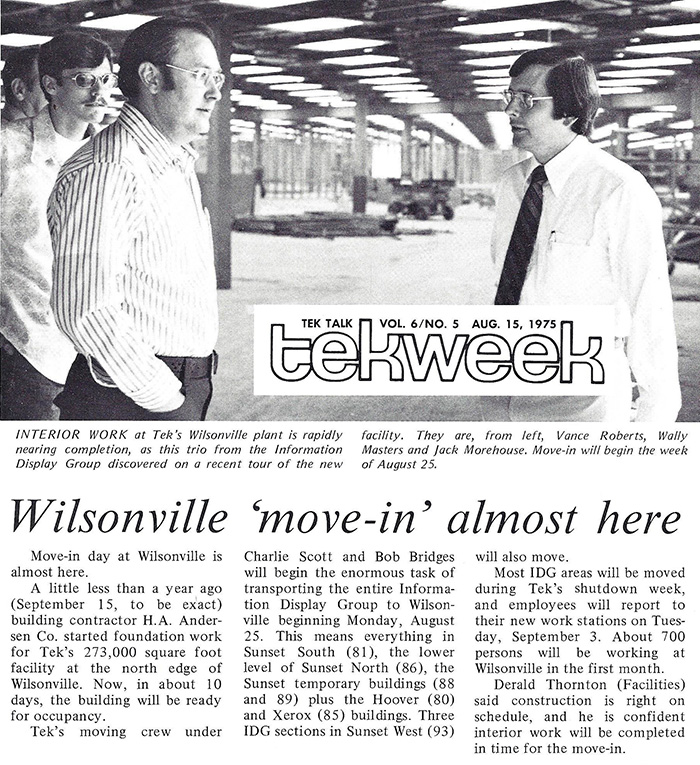 This August 22, 1975 TekWeek article describes the opening of the Wilsonville plant. 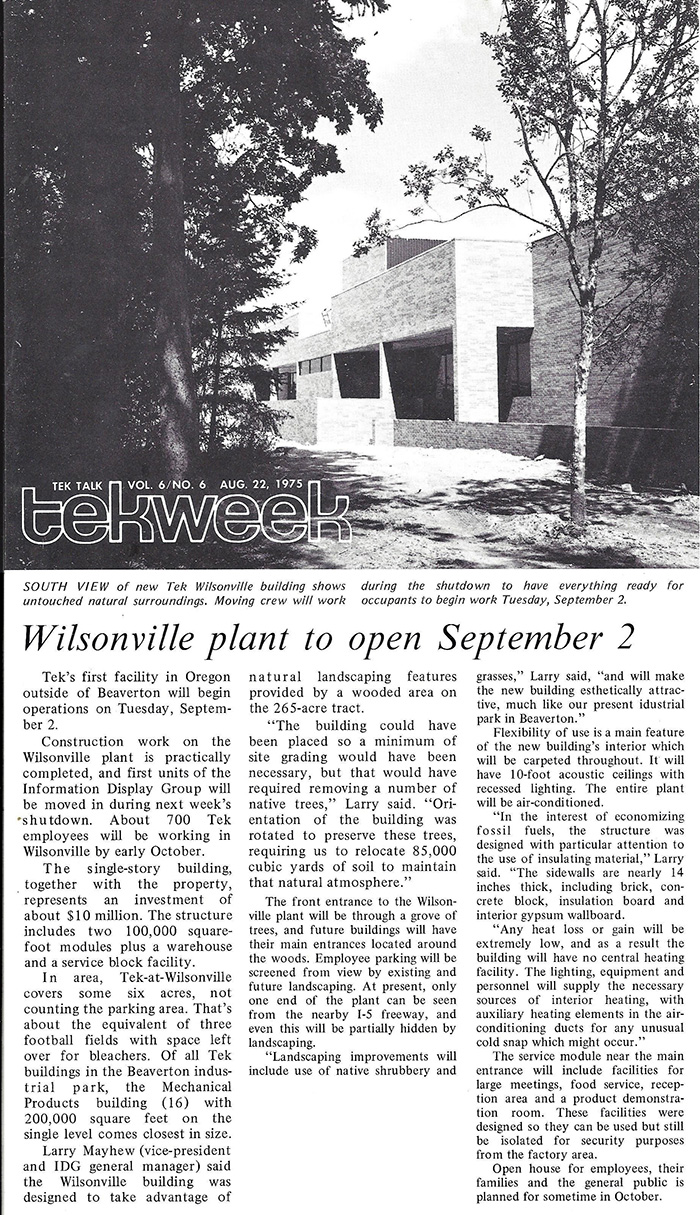 This October 24, 1975 TekWeek article describes the open house held at the site.  Click the image to read the PDF. 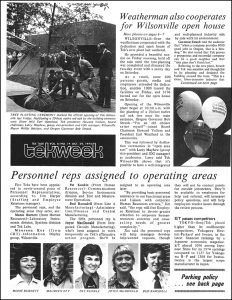 This March 11, 1977 TekWeek article features the new signs at the site. 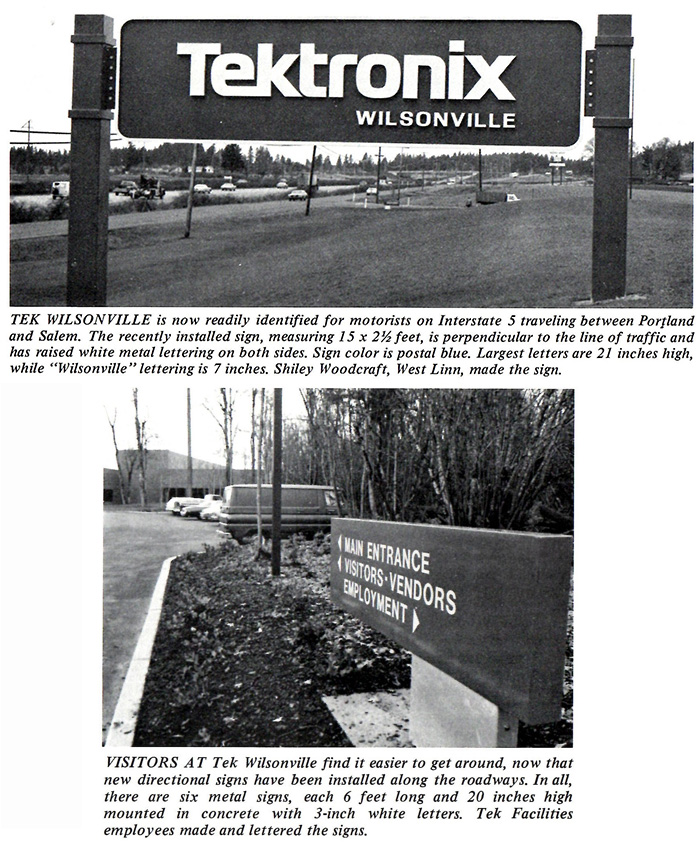 This reprint from July 1978 Architectural Record features the design of buildings 60 and 61. Click on the image to view the PDF. 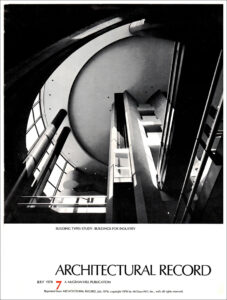 These groups morphed over time.  Eventually Graphic Computing Systems (GCS) took responsibility for the 405X family of products.  There was even a Mechanical Engineering Graphics (MEG) group to create software for the Mech Eng market that could leverage Tektronix hardware. Building 61 was added onto building 60 to accommodate the growth.

This is a nice aerial view of building 60 before the addition of the EMI and Safety lab probably taken in the late 1970s. Building 61 would be later added on to the East (left) in 1978. 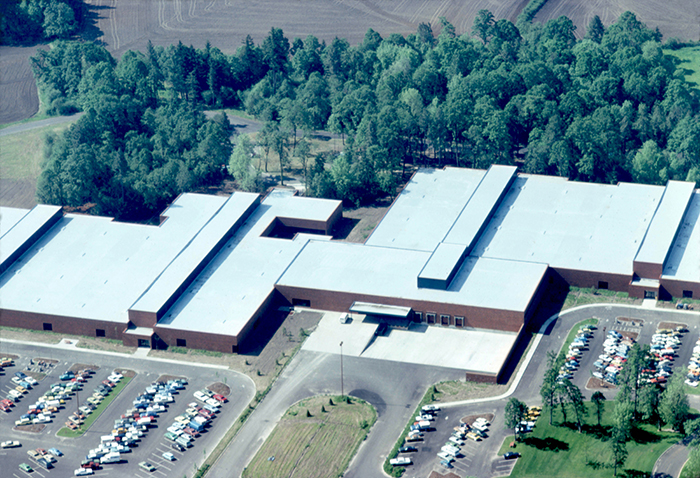 Tektronix later chose to exit the computing systems business and focus on terminals and hard copy products.  The hard copy products initially were peripherals to the Tektronix terminals, but refocused on the general purpose computing market.  Eventually the printer group became Graphic Printing and Imaging Division (GPID).  Building 63 and 83, a warehouse, were added to the site was added to accommodate more growth. This November 3, 1978 TekWeek features the construction of building 63. 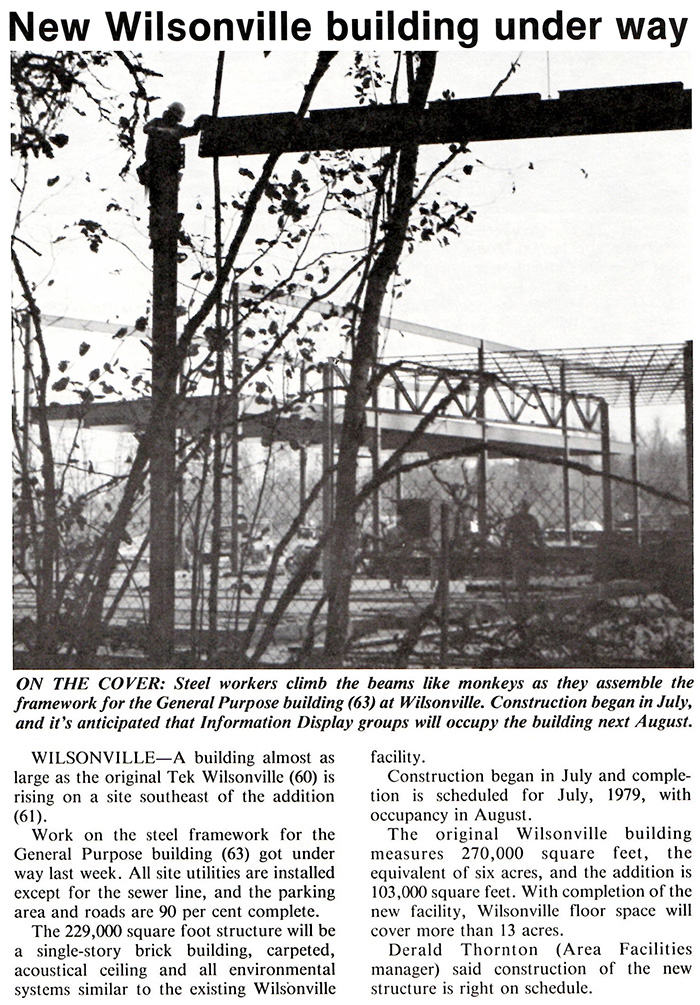 This July 27, 1979 TekWeek features the opening of building 63 and identifies building 83 as the next construction on the Wilsonville campus. 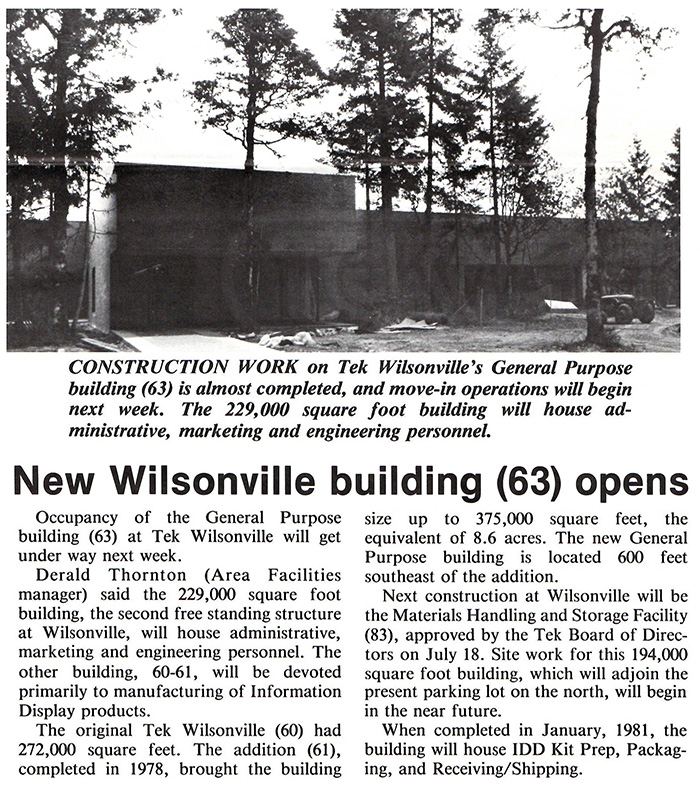 The terminals group was divided into low end terminals as Graphic Desktop Products (GDP) and high end terminals as Graphic System Products (GSP).  Eventually Engineering Computing Systems (ECS) was formed to develop engineering workstations (some noticed that ECS was GCS with a parity error).  These products were developed around the ill-fated National chip set and after developing an initial family of products was disbanded.  Artificial Intelligence Machines (AIM) was formed to develop the 4400 series of Smalltalk workstations.  Eventually GSP evolved into Graphic Workstation Products (GWP) and developed a family of workstations using the Motorola 88K family of processors.  However, the market was well entrenched with the likes of Sun and Apollo workstations and few applications were ported to Tektronix workstations. 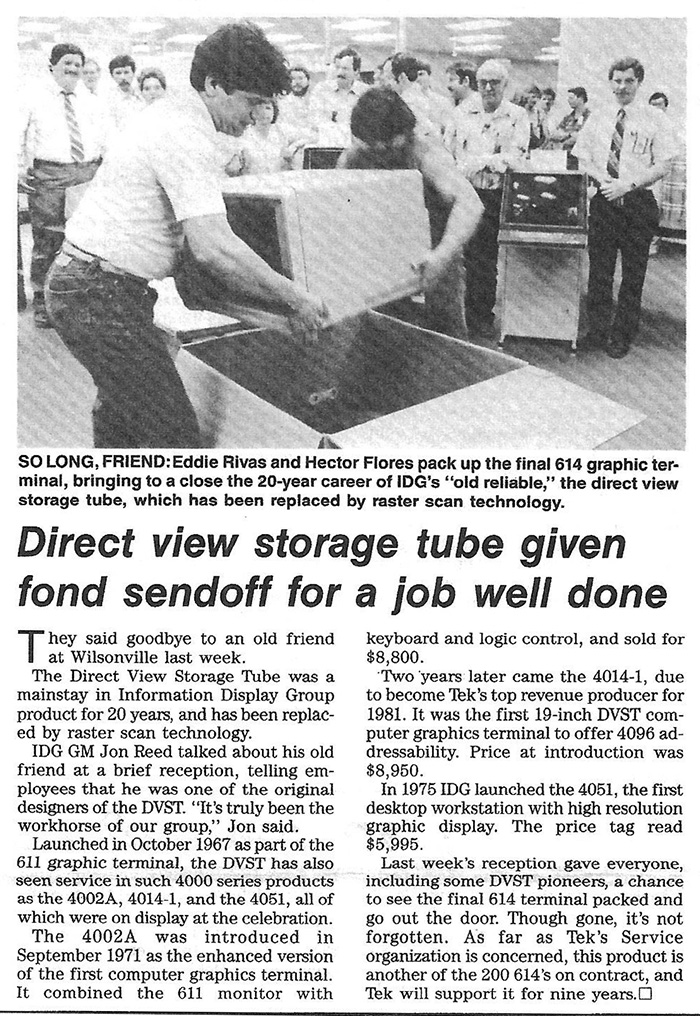 GPID continued focusing on printing with breakthroughs in color wax technology and became the Color Printing and Imaging Division (CPID).  With the terminal market waning both GDP and GWP were closed but a new group focusing on network-based computing emerged as Network Displays (NWD) that developed a family of color X-Terminals.

By the mid-90s it was clear that video, computing, and networks were converging and Tektronix formed the Video Networking Division that merged the video disk storage (Profile) portion of TV Products and NWD and consolidated on the Beaverton campus.  CPID took over the entire Wilsonville campus as their color printing business grew.  In 1999 Tektronix divested of CPID and VND to return to its roots as a Test and Measurement company headquartered in Beaverton.  CPID was sold to Xerox for $950 million and VND was broken up and sold in pieces.  Grass Valley Group (including the Profile video disk group) was sold to a private investor Terry Gooding, Network Displays was sold to Network Computing Devices (NCD), and the Video Telecom group was spun out as Tele.com, Inc. which was later acquired by Tut Systems.

Here are some aerial photos of the Wilsonville campus.