Tektronix purchased 313 acres in Beaverton in 1956. This undated Beaverton map shows the area prior to the construction of the Tektronix campus.  Click on the image to view the PDF. 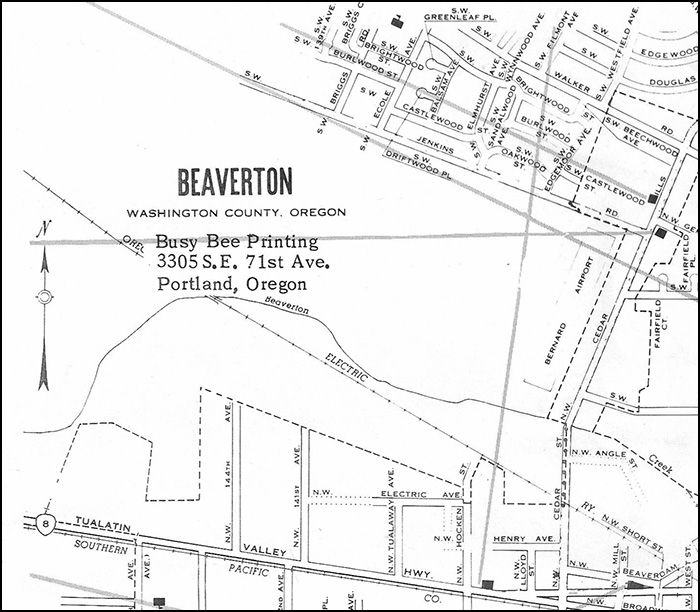 More information on Beaverton can be found on our Beaverton History page.

The first building constructed was 70 for Warehouse with some office space.  This May 1957 TekTalk describes the construction.  Click on the image to view the PDF. 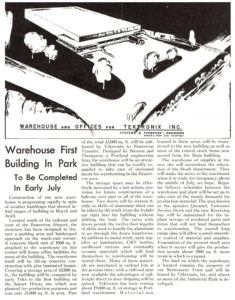 The second building constructed was 19 for the Metals operation.  This August 2, 1957 Oregonian article describes the new plant.

This aerial photo shows the Beaverton campus during the construction of building 19. Building 70 can be seen to the south. Click on the image to view a PDF with additional photos that outline the campus. 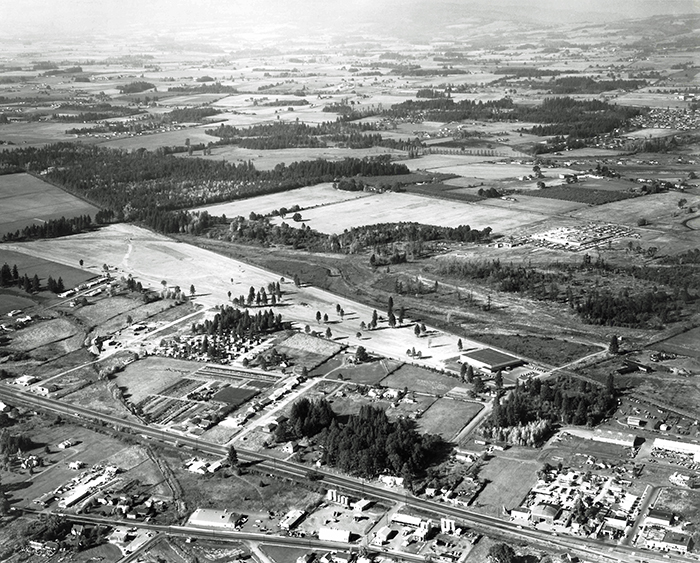 This November 8, 1957 Oregonian article describes issues with traffic and the Bernard airport and Tektronix plan for an alternate road to mitigate issues. Click on the image to view the PDF. 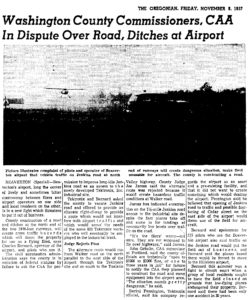 This photo shows the construction of the twin Assembly buildings 39 and 47. 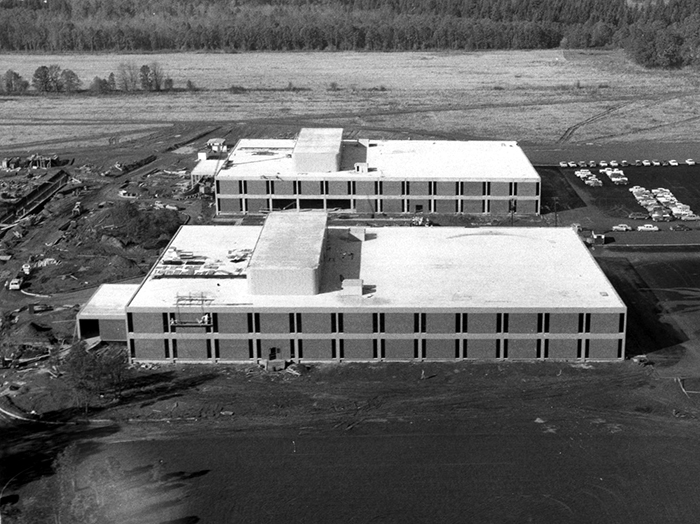 Tektronix was growing fast.  Buildings 76, 13, and 74 would be starting construction within a few months of each other. This April 13, 1959 ScopeScoop describes construction of the new retirement trust building 76. 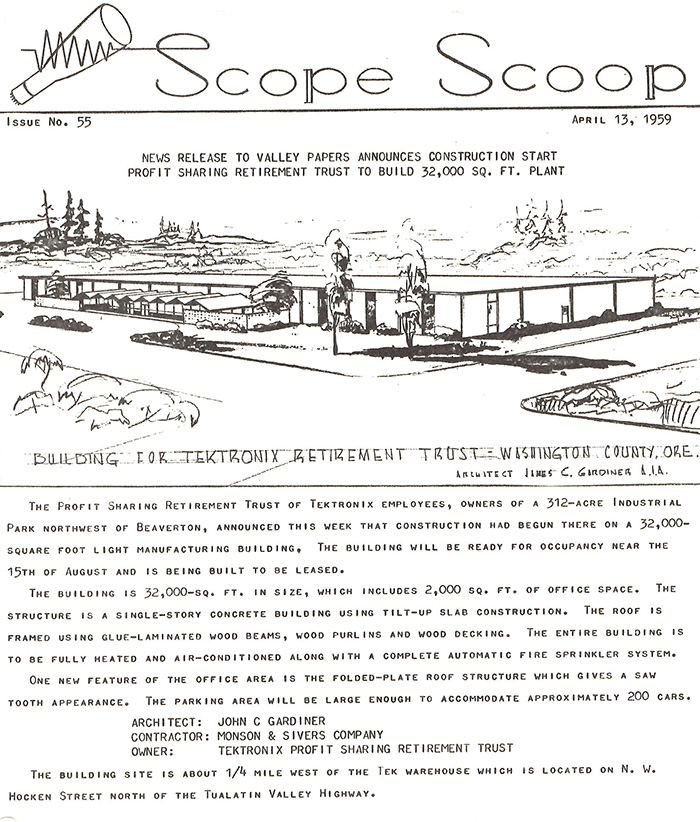 This May 1, 1959 ScopeScoop describes moves to surrounding Beaverton area buildings. 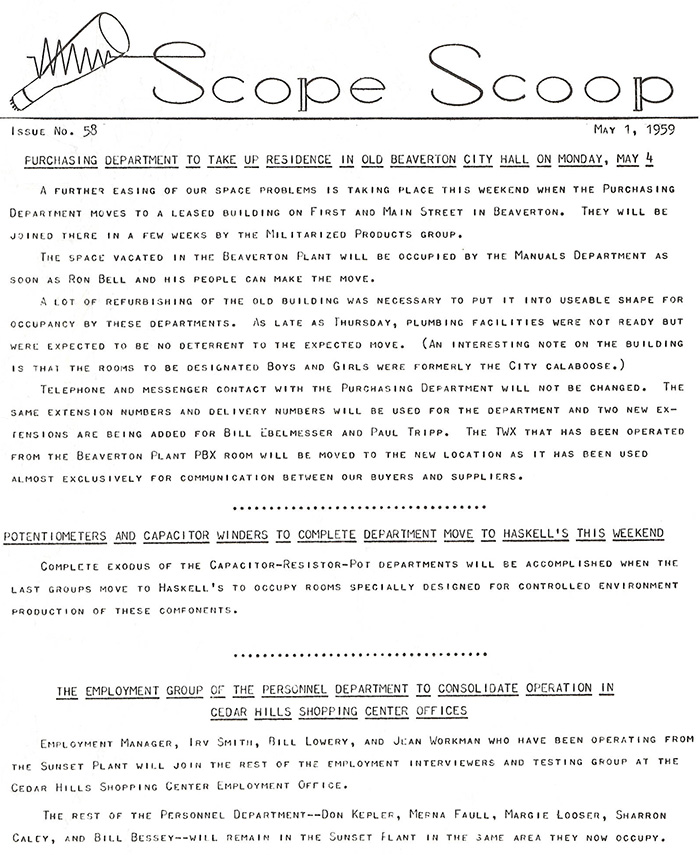 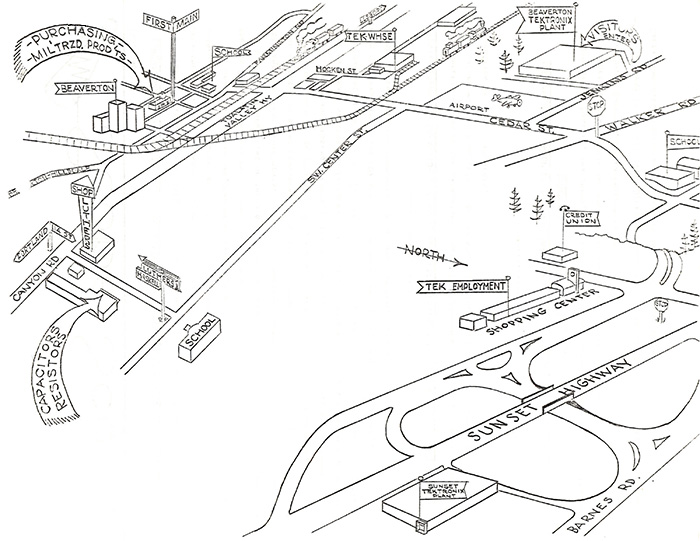 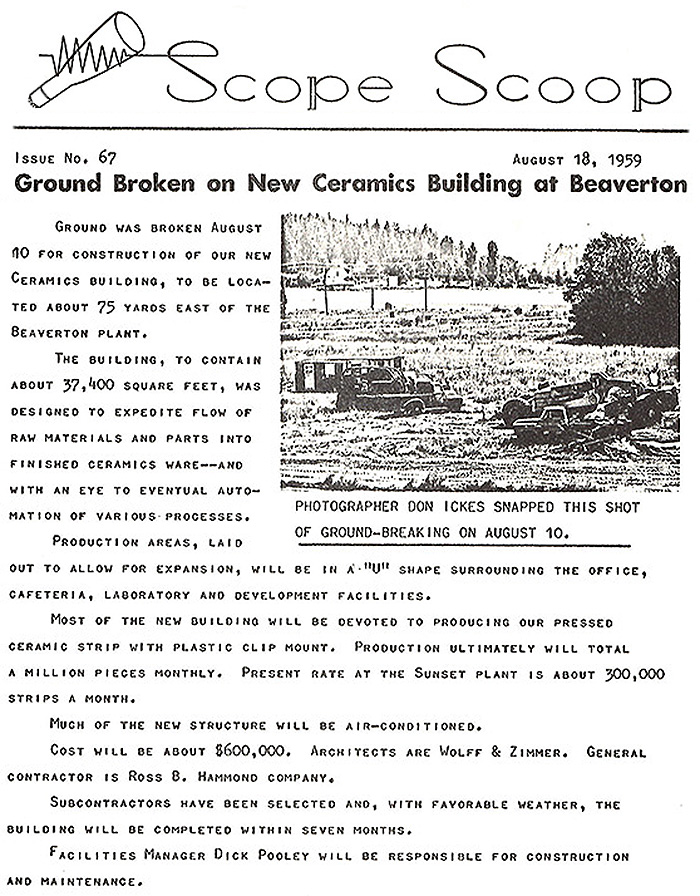 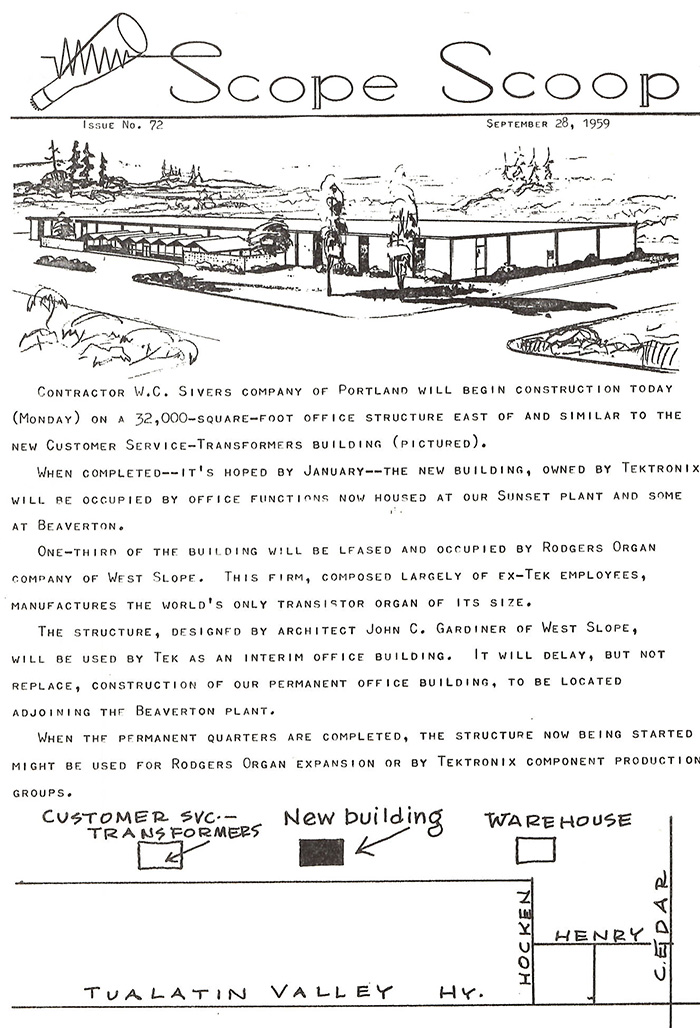 This August 8. 1960 TekTalk article shows construction and road progress on the campus.

This May 21, 1961 TekTalk map shows construction progress towards the master plan. This master plan differs considerably on the west end of the campus. 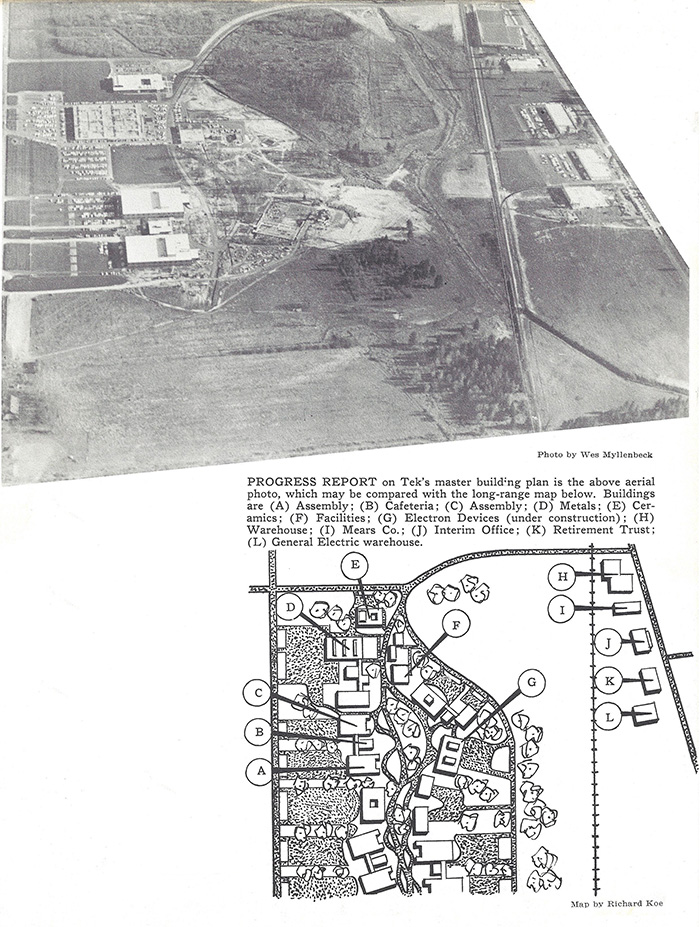 This 1963 photo is a scan from the first 1964 Annual Report and shows the construction of the Technical Center building 50. 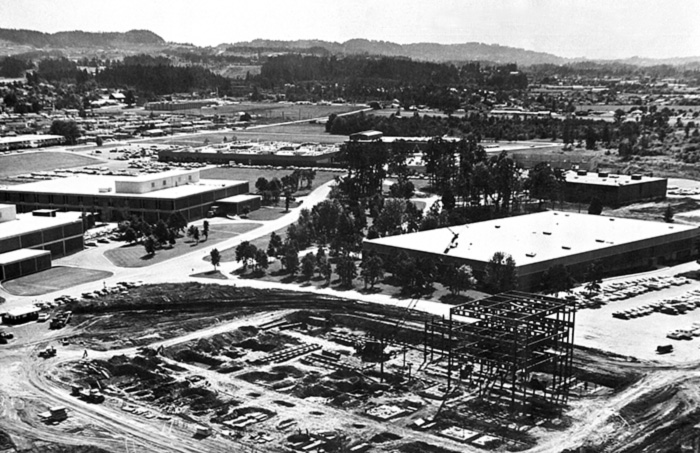 This 1963 photo is looking west.  In the far distance you can see the construction of the Technical Center building 50.  Ceramics building 13 is in the foreground.  The atrium of the building is the current location of the vintageTEK museum restoration room. 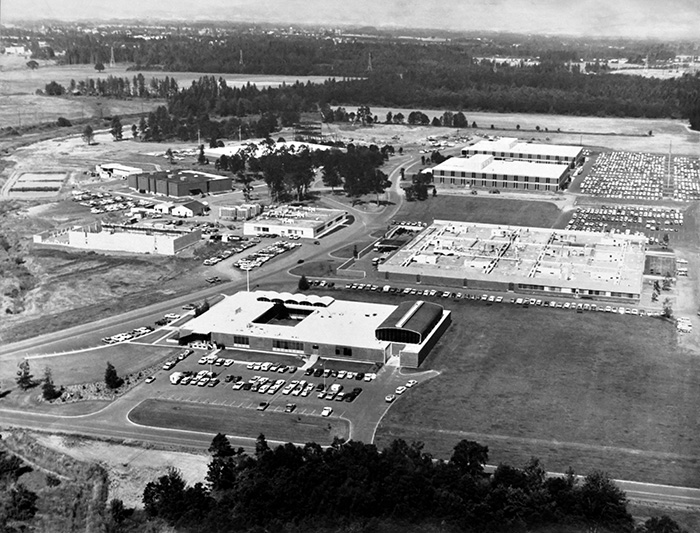 This undated photograph of the campus looking east shows the completion of building 50. 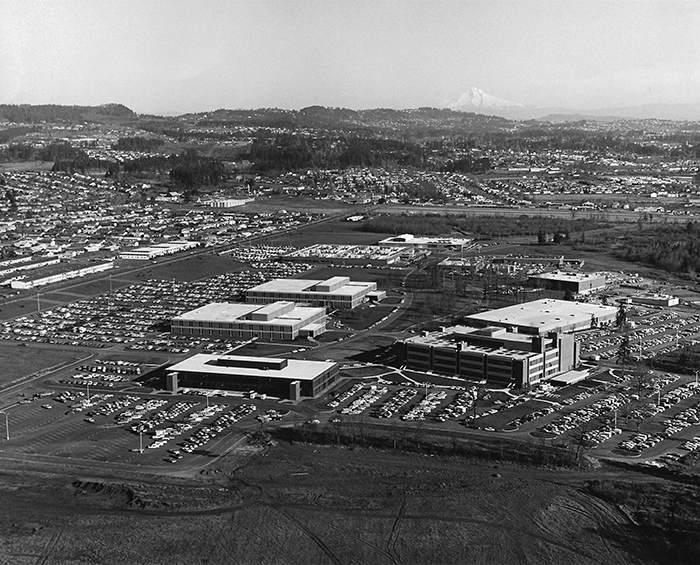 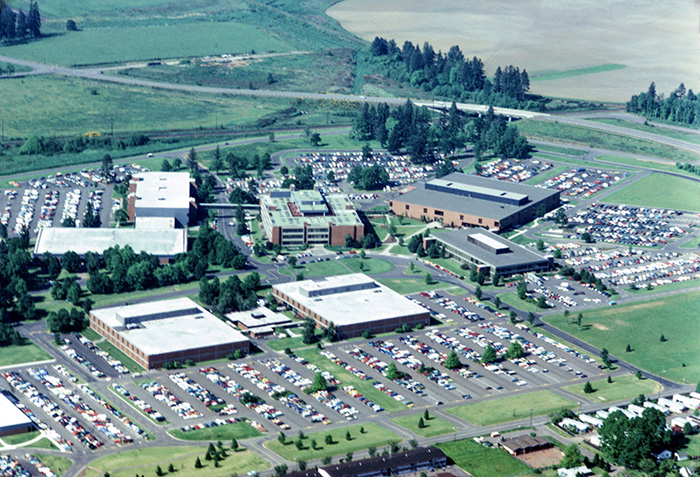 This April 22, 1966 TekWeek article has a photo and description of some of the parking issues at the new campus. 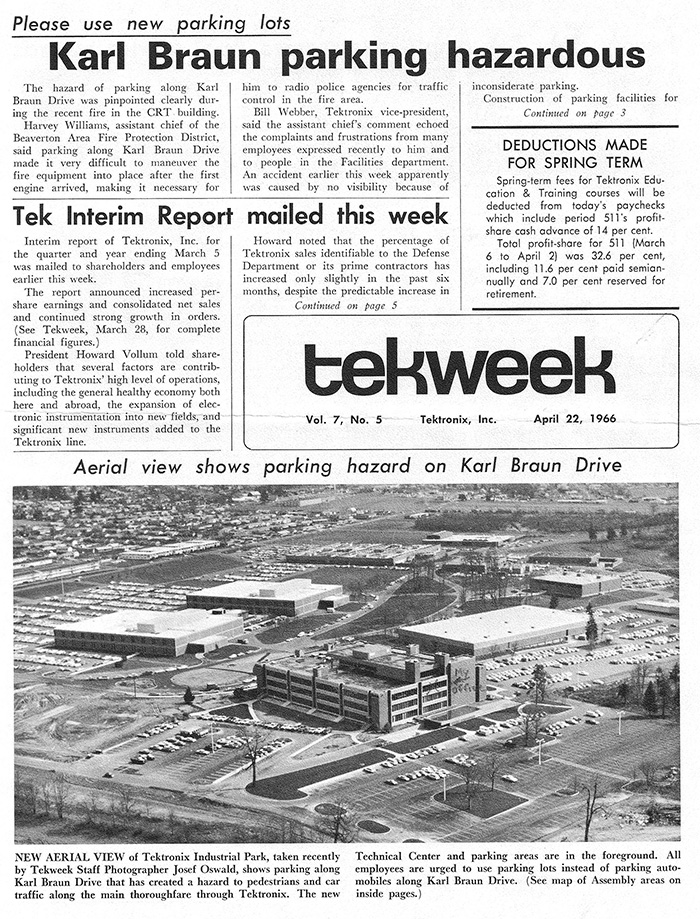 This February 16, 1968 TekWeek featured an aerial view of the campus. 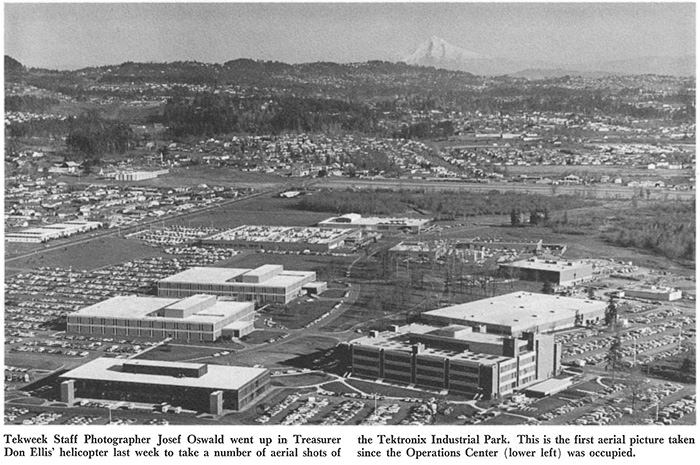 This July 17, 1968 engineering drawing of the Beaverton and Sunset campuses details information about the building size, power, and water along with the date of construction. What is interesting is it is before the construction of building 58 and shows a building 50A "To Be" in what is the parking lot just south of building 50. Click on the image to view the PDF. 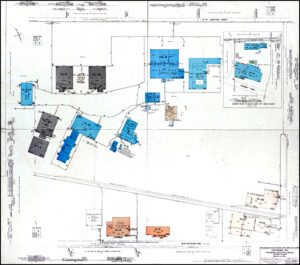 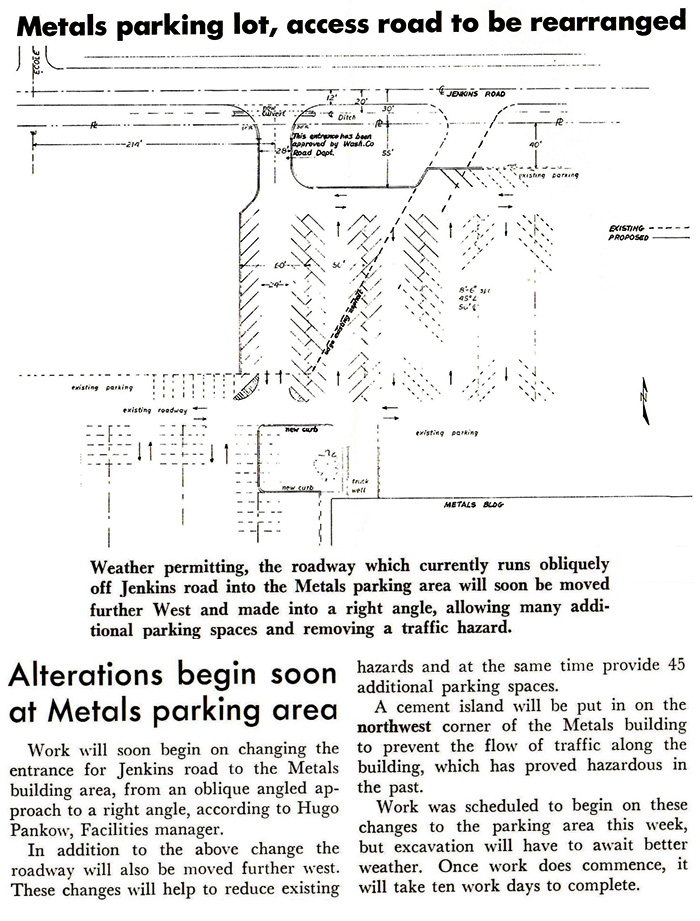 This May 25, 1973 TekWeek article features the approval to construct building 58. 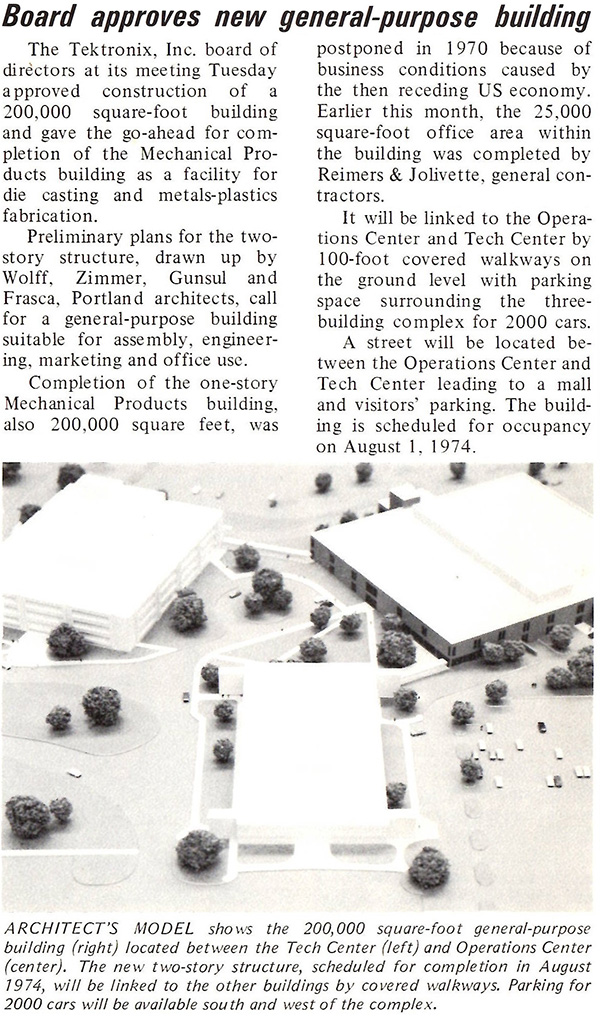 This August 10, 1973 TekWeek describes the interim traffic problems created when Murray was constructed to a through road. 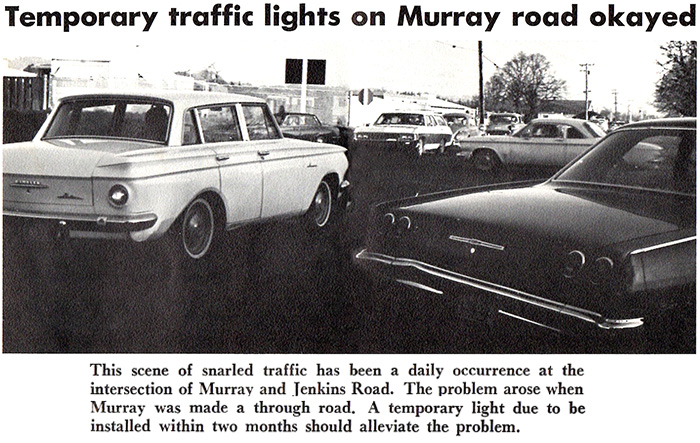 This August 10, 1973 TekWeek describes the preparation for the building expansion including the removal of an old oak tree.  Click on the image to view the PDF. 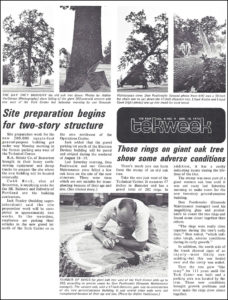 This August 17, 1973 TekWeek describes the relocation of both trees and the new building. 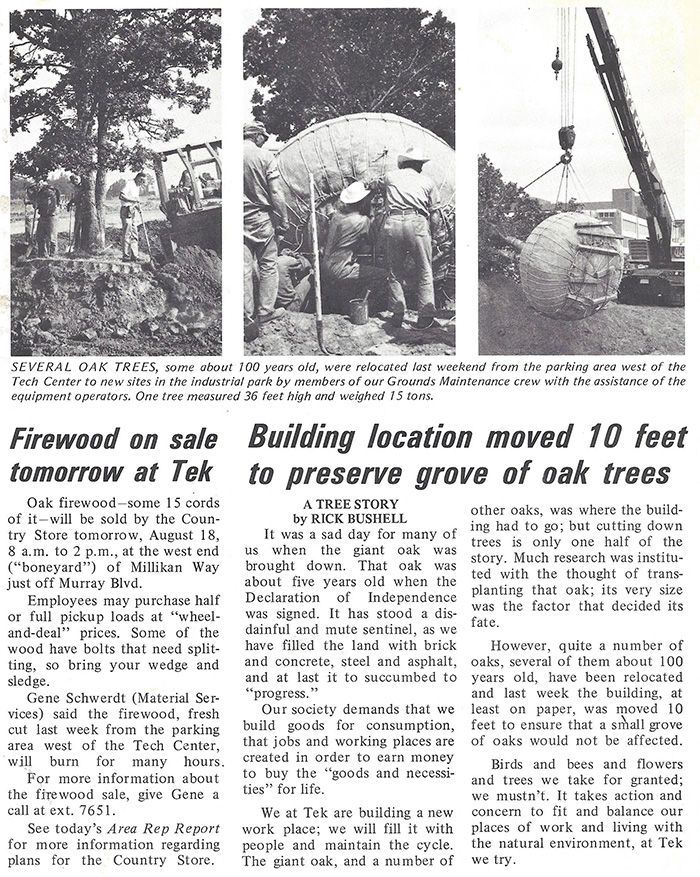 The Facilities group started high altitude aerial photos taken of the Tektronix property starting in the early 1960s. These images, usually taken from an altitude of about 6,000 feet provide a comprehensive chronicle of the campus’ evolution and that of the surrounding area. This May 11, 1971 photo shows a wide view of Beaverton and the Tektronix campus. 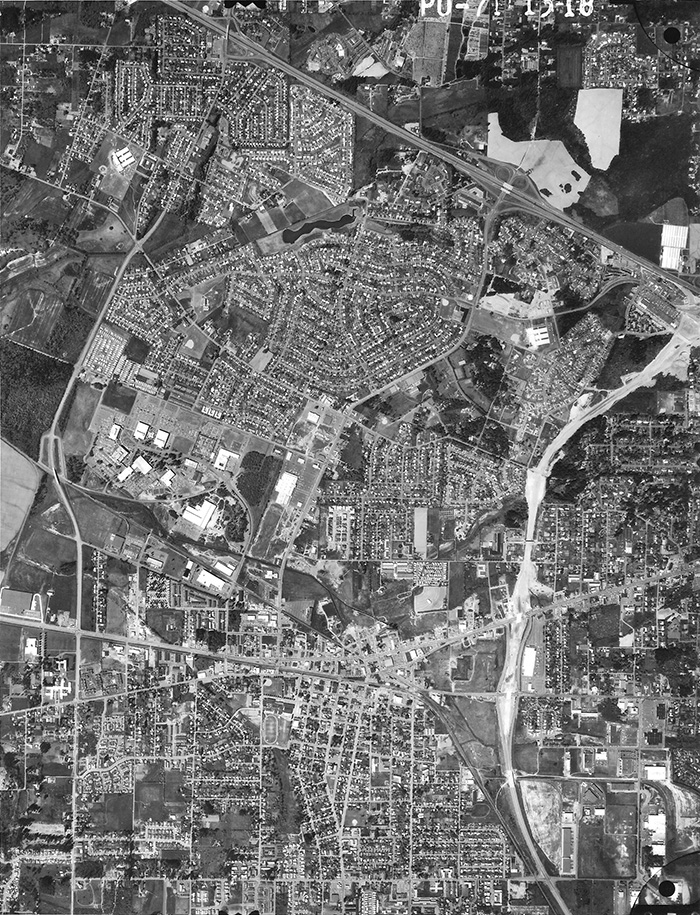 This November 12, 1978 article describes the construction of building 59 for Microelectronics. Building 59, and also the warehouse building 78, were the last major buildings to be added to the Beavertson site. Click on the image to view the PDF. 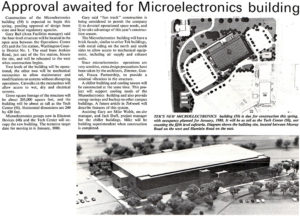 This May 10, 1981 TekWeek features property adjacent to the Beaverton campus that was never developed. 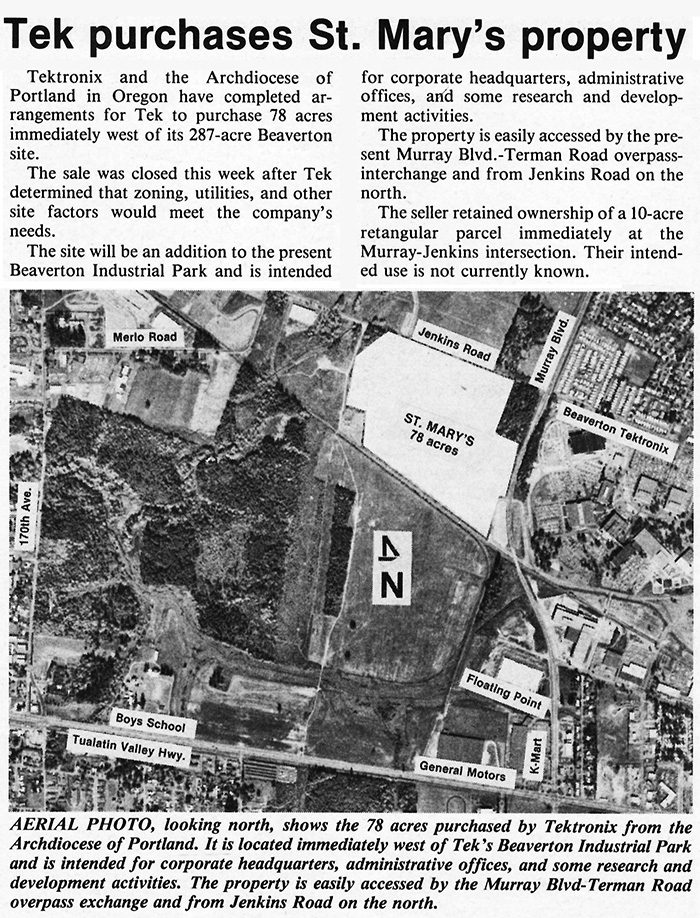 This 1985 document details the chronological order of the construction of the buildings on the Beaverton and surround area sites.  Click on the image to view the PDF. 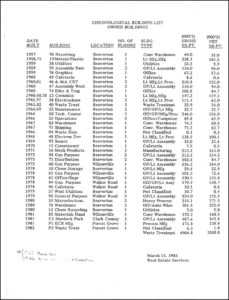 This slide show is a series of aerial photos of the Tektronix campus from different sources. Some of the photos are dated but we've had to estimate the dates of the unmarked prints. All these photos are oriented with north at the top of the picture; Jenkins Road runs across the top of each photo. You can use the three adjacent U-shaped apartments on the north side of Jenkins as a reference. The Bernard Airport is located to the east of the campus, just out of view in most of the photos. You can also see that Murray Road (on the west side of the campus) is missing in the early photos (it was built between 1965 and 1968). The last photo is the most recent and it includes building numbers. Building numbers were gridded to help orientation - north of Karl Braun are odd numbers and south are even.  Building numbers start with 1X on the east and increase to 5X (and later 7X) to the west.

This slide show is a series of lower elevation photos and were taken less regularly. Many of the photos are undated.

These two photos show the switchboard operations in 1961. 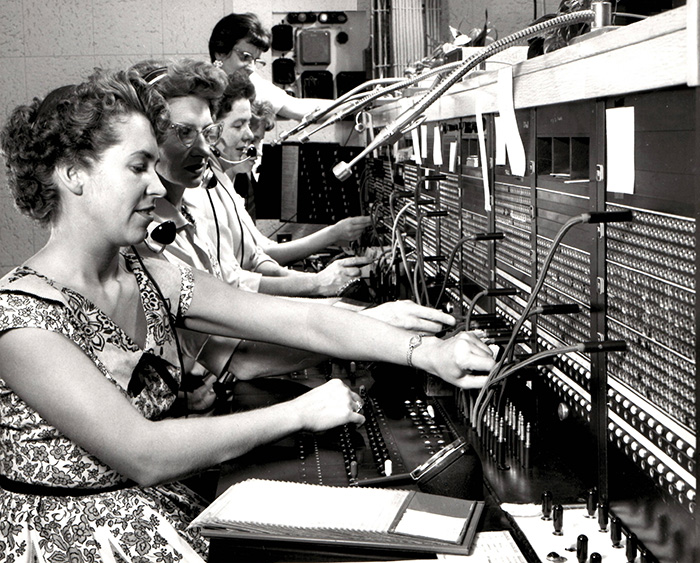 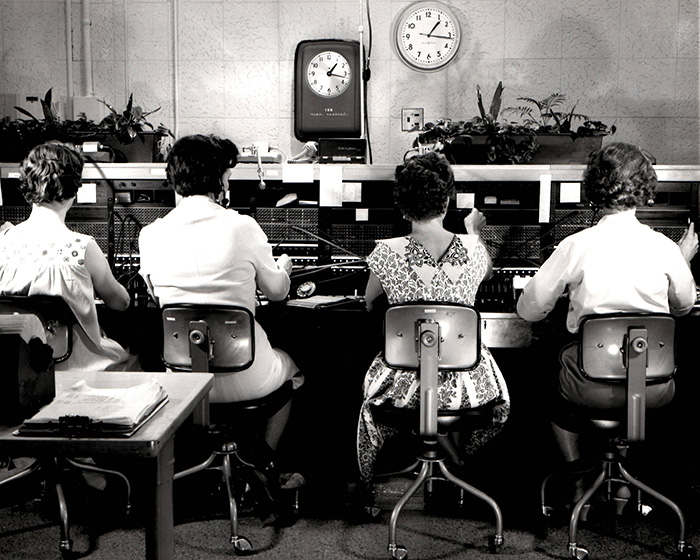 The Tektronix Park is a good film about the Beaverton Campus located on our Video Gallery.  There are also other films in the Gallery about the campus.