Tektronix has a long history of producing critical components in-house when a given part was either not available commercially or the quality of existing offerings was found to be substandard. Early in Tektronix history, components such as precision resistors, transformers, plastic knobs and printed metal instrument front panels were all being built internally.

In 1950 lingering issues with cathode ray tubes, arguably the single most important oscilloscope component at the time, turned much more serious. Tektronix was buying CRTs primarily from RCA and the Allen B. Du Mont Laboratories, but, at the same time these were their principal competitors in the rapidly growing oscilloscope market. New, higher-performing Tektronix scope designs were planned that required performance not available at that time from any CRT provider. Even though Tek was reluctant to telegraph their new-product plans to their closest rivals, they made repeated requests for CRT improvements, mostly to Du Mont, and were turned down.

The difficulty reached a critical level when reject rates for incoming CRT shipments dramatically increased from both vendors. Tektronix was in its fifth year in business and sales were very good and rapidly getting better, but lead times for oscilloscopes were already measured in multiple months. A shortage of CRTs was only to make these lead times worse. RCA and Du Mont were competing with several other companies to produce CRTs and sets for the booming television market. CRTs for the growing, but much-smaller oscilloscope market probably were given a lower priority. In addition, there was evidence Du Mont in particular was intentionally shipping reject CRTs – so called “culls” - to Tektronix. Du Mont historically had been the technology leader in oscilloscopes and they were probably feeling some pressure from Tektronix’ success.

Howard Vollum made a “bet the company” decision for Tektronix to develop a CRT design and manufacturing capability. Imagine a new computer company today deciding to ignore Intel or AMD and choose to make their own microprocessors. Pretty foolhardy. The effort took three years of frustration and trial and error, but the first Tektronix-made CRTs were used in the iconic Type 531 oscilloscopes that introduced the plug-in concept in 1954. And the rest is history.

The CRT operation eventually would flourish for almost forty years, eventually closing in the mid-1990s’. At one point it employed almost one thousand people while producing over one hundred fifty different CRTs in two dedicated buildings (46 & 48) on the Beaverton campus. In 1980 production reached over two hundred thousand tubes per year, likely making it the largest CRT production facility not producing television tubes. As one example, well over a quarter million T465 CRTs were made for use in the high volume portable scopes.

Tektronix-made CRTs enabled the groundbreaking performance in many of the company’s leading products, including the T7100 CRT in the showcase that was used in the 7104 oscilloscope, the fastest real-time analog scope every produced. The CRT for the 7104 is probably the most complex tube Tektronix ever made. It incorporates an electron-amplifier, a microchannel plate derived from night-vision technology, in order to support the scope’s groundbreaking bandwidth.

Many of the exhibits came from the CRT Time Capsule. We have some of the most unique CRTs and components ever produced, and all were made at Tektronix. 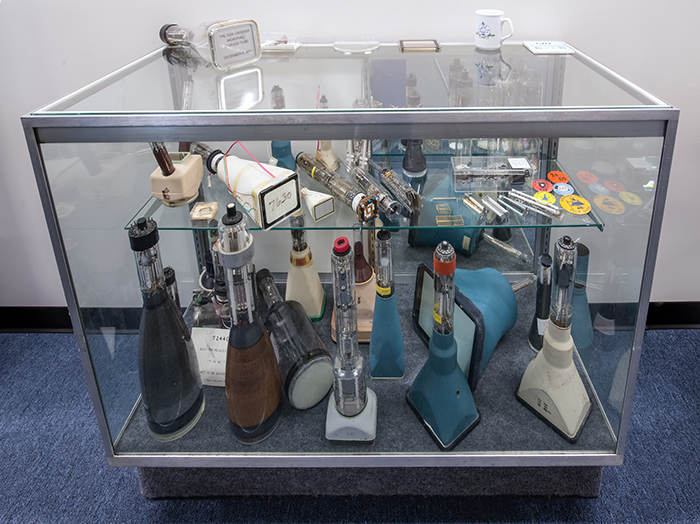 In 1962 Tek employee Bob Anderson’s invented an elegantly simple storage CRT, touted by Howard Vollum as one of Tektronix’ most significant technical accomplishments. At a time when electronic memory was either prohibitively expense or non-existent, the Anderson CRT allowed an image to be retained on the screen for hours and led the way to an extensive line of industry-leading analog storage oscilloscopes starting with the 564 and the 649.

But Bob’s tube design also led to the creation of storage CRTs suitable for use in computer graphics terminals – a product category Tektronix is credited with creating in the early 1970s. Tektronix proprietary CRT technology resulted in the company being the leading – and for a while, the only – manufacturer of high-resolution computer graphics terminals. It was Tektronix first business unit not based on oscilloscopes. Revenue from the graphics monitor business rivaled that from oscilloscopes for more than a decade. The 611 CRT in the showcase was Tektronix first graphics CRT, used in the 611 and 4002 monitors and the world’s first desktop scientific computer, the 4051 (on the same bench). The 611 was scaled to 19” and 25” where it was used in the 4014 and 4016 monitors, respectively.

Here is a photo of Bob Anderson along with all the prototype CRTs used to develop the first Direct View Storage Tube (DVST) CRT.  The three prototype CRTs are in the upper right top shelf of the CRT exhibit. 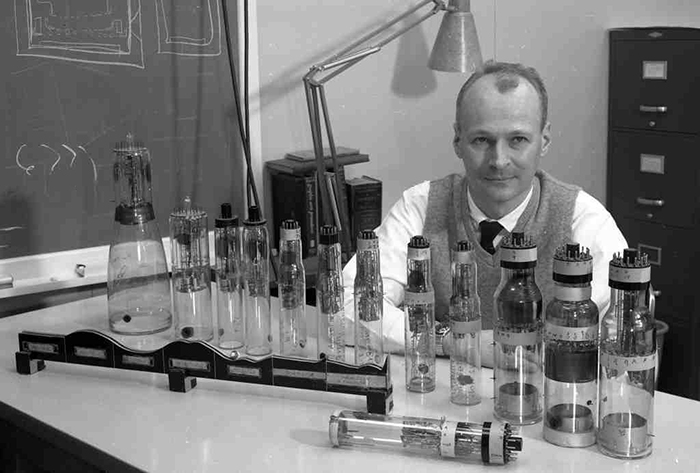 Our building 13 was a production center for another Tektronix innovation – use of ceramics in the production of CRT funnels. The company developed a ceramics manufacturing capability to produce the ceramic strips that, at a time predating printed circuit boards, Tektronix scopes looked as good inside as out and were simpler to fabricate and service because of the mounting of electronic component on these strips. Ceramic funnels, derived from the ceramic strip technology, permitted the CRT operation to have complete control over the design and manufacture of funnels when companies producing glass CRT funnels were much more focused on making product for the television market. Ceramic funnels also readily enabled the use of flat faceplates and the ability to screen print a graticule – essentially a graph-paper like pattern - on the inside of the faceplate. Storage CRTs also required electrical vacuum feedthroughs that were easier to implement with ceramic funnels. The 611 CRT employed the largest ceramic funnel Tektronix ever made. More information is on our Ceramic Strips and Funnels page.

Here are some photos of CRT manufacturing at the Sunset plant.