This exhibit is a demonstration a a simple cathode ray tube –  a CRT. It was one of the first commercially-available CRTs produced by RCA in the mid-1930s – and it still works! The term “cathode ray” was created in the early 1900s for the emission of unknown composition discovered to come from experimental vacuum tubes. Cathode rays were eventually determined to be a stream of electrons, but the name stuck.

This CRT has three primary constituents:

Cathode ray tubes were used in every Tektronix oscilloscope up into the 1990s and all television sets for the first fifty or so years of their existence. Today, CRTs have almost completely been replaced by flat panel displays, primarily liquid crystal panels.

Visitors can view inside this CRT to view the internal construction. Magnets are available to demonstrate the deflection of the electron beam and resulting image on the screen.

We also have a video of the construction of our Early CRT Exhibit on our Video Gallery. 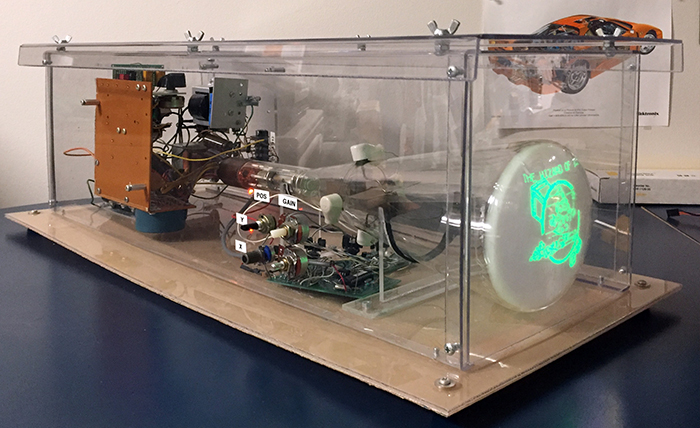