Milton (Milt) Bave was Tektronix' first mechanical engineer. Jack and Milt had met in the U. S. Coast Guard during World War II. Described in Marshall Lee's "Winning With People: The First Forty Years Of Tektronix as a mechanical genius, he joined the founding team in 1946 at Jack Murdock's urging.  Milt worked closely with Howard Vollum to transform the benchtop 501 prototype into Tektronix' first product, the 511. The museum has a 511 on display without the cover and the mechanical construction is very well designed.  Milt clearly set the bar high for Tektronix' mechanical design.

His wife, Emelia, also worked at Tektronix, building all the cables, doing the wiring and some assembly for the early production Type 511 scopes.  While not a founder, he was given the opportunity to purchase stock in the fledging company and served on the Board of Directors in the early 1950s. In 1953, Milt Bave, Miles Tippery and Logan Belleville all sold their equity in the company back to Tektronix and left the company.

This September 1952 TekTalk provides some insight into his background and personal interests.  Click on the image to view the PDF. 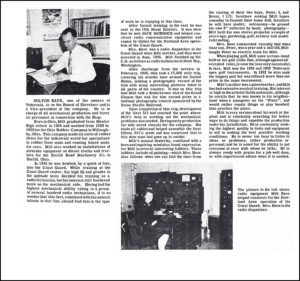 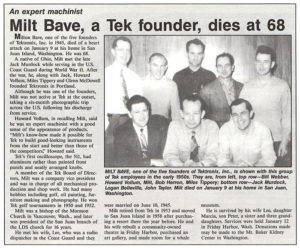