Warren K. Dallas, known at Tektronix as "Dal" was a native of Ohio, born in 1906.  His early interest in radio grew into a career where most all the companies he worked for were involved in either radio (called 'wireless' in the early days) or telephony. He served in the Navy in World War II maintaining radio and radar gear in North Africa and Europe. After the war Dallas followed a friend to the Pacific Northwest where he eventually became the Northwest sales representative for Neely in Portland.

Like Tektronix, Neely started business after the war as a sales and service representative for several emerging electronics companies including Hewlett Packard and Electro Scientific Industries (ESI). For fledging companies too small to support nationwide marketing, sales and field service, Neely provided a commission-based service that was precisely what was needed. Tektronix signed on with Neely in 1947 and the alliance was mutually beneficial in the early years.

While the Neely company was successful nationally, Dallas found it difficult to make a living selling electronic equipment in the Northwest. Since they shared the same building, employees, and Howard in particular, grew to know and like him. Sensing his frustration one day Howard offered Dallas a job as Tektronix first sales manager - and Dal Dallas accepted. Howard had noted Dallas' character and skill and he proved to be ideal as Tektronix' sales representative. His approach was based on honesty and technical excellence - the same traits the founders possessed in abundance.

Dallas was recognized in the first group of TEKEM employees in 1959; these were key achievers selected by Jack Murdock and Howard Vollum to purchase pre-IPO shares of stock with company provided financing. This proved to be an extremely lucrative offering.

This January 1952 TekTalk features some insight into W. K. Dallas. 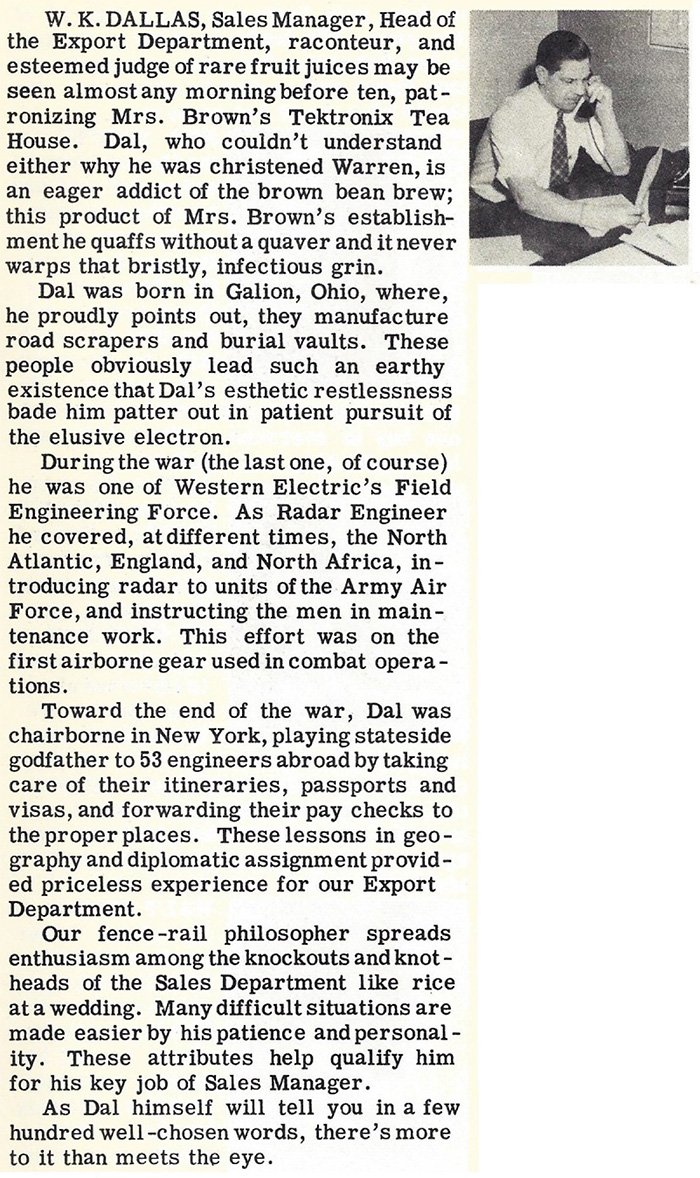 This November 5, 1954 TekTalk features some personal insight into Dal. 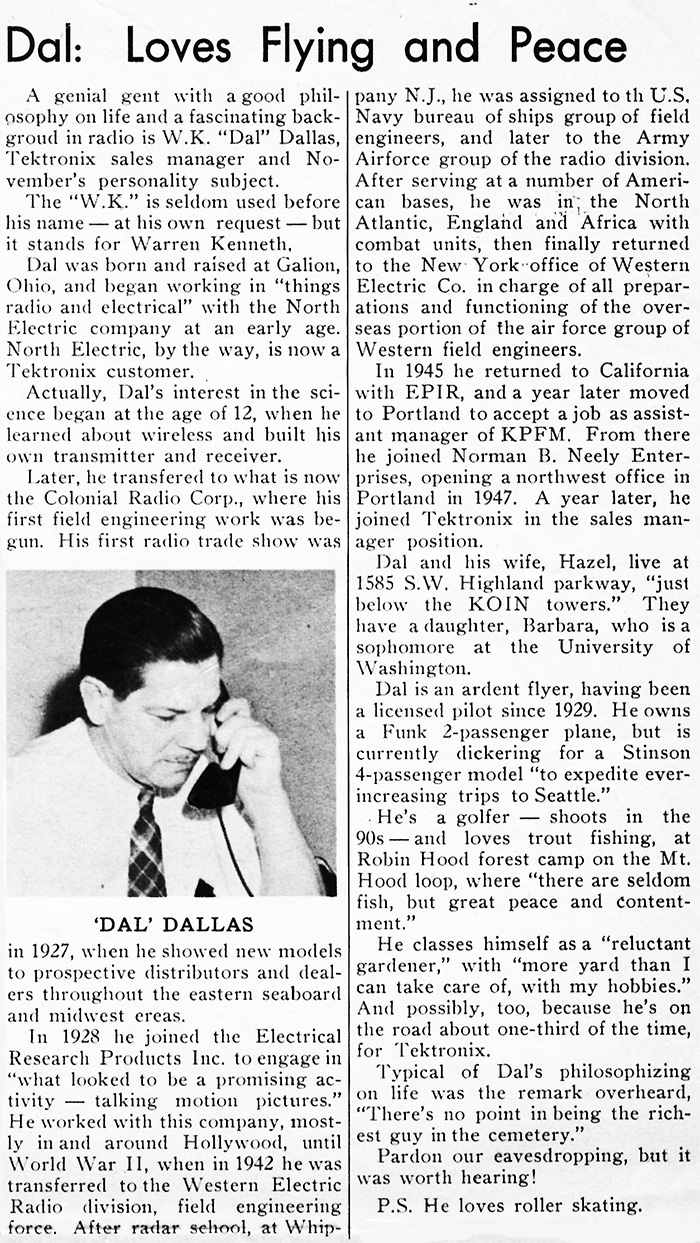 This July 20, 1959 issue of Scope Scoop has an article on a small plane accident and injury to Dal and his wife Hazel.  Click on the image to view the PDF. 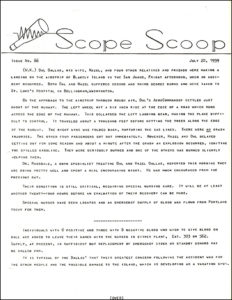 This biography of Dal is an extract from the "History and Environment Of Tektronix" document, a 249 page document published in October of 1978 and was edited by Robert Bosler.

W. K. Dallas was born and raised in Galion, Ohio. His first job was with North Electric performing wiring and assembly on telephones. His next job was in New York in 1924 working as a field salesman/engineer for Cutting and Washington (later Colonial Radio), a small manufacturer of radios. In 1926 he returned to Galion; then in 1928, he returned to New York to join Electrical Research Products (ERPI).

Electrical Research Products was a subsidiary of AT&T formed to handle by-products of Bell Labs, principally "talking movies." At ERPI, Dallas was a field engineer whose job was to sell, install and maintain movie equipment. In 1930 Dal was transferred to Hollywood, California, as a part of the Recording Division of ERPI, where his job was to install and maintain electrical equipment for recording and movie producing studios. During this period in 1930, he married the boss's secretary, Hazel. In 1932 they had a daughter.

In 1941 Dal transferred to the Radio Division of Western Electric, where he was a radar engineer attached as a civilian to the Navy and Air Force in a liaison role in numerous places in the Eastern U.S. In 1942 he was assigned to an Air Force anti-submarine squadron and served in Newfoundland, Britain and North Africa. In late 1943 he returned to New York where he was the supervisor of field engineers going into the Pacific Theater. One of the field engineers that Dal supervised had long had a dream of returning to Portland and to establish an FM station. Dal agreed to join him and at the conclusion of the war drove from New York to his home in California, via Portland. At that time, however, Dal stayed with his recording studio job. Finally, in 1946, Dal came to Portland to join Stanley Goard in starting KPFM radio.

Since this was the start of FM broadcasting, times were hard financially so he became a manufacturer's representative for Neeley Enterprises, a distributor of electronic components. One of Dal's first accounts in 1947 was Tektronix, then located at 7th and Hawthorne. At the time, however, selling electronic components was difficult because there was really not much of an electronics industry. One day, Howard Vollum asked Dal whether Neeley was going to be able to successfully maintain an office in Portland, and Dal expressed some doubt. Then Howard said, “Well, someday we'll need a sales manager,” and in May 1948 Dal joined Tek as sales manager. Dal was Tek's thirteenth employee (not counting the five founders). Later Dal would say, “I had had contact with these people as a supplier of components. I had other job options, but what made me really want to be a part of what they were doing was their integrity.”