A recurring theme for many early Tektronix employees is their interest, even obsession, with radio technology in their early years.  Fred Hart is no exception, operating his own pirate radio transmitter in Seattle, and making use of his skill at a most critical time in the coming war.  He worked at several jobs before entering the Navy in World War II, where he served aboard the infamous cruiser, U.S.S. Indianapolis, the ship that, after delivering the atomic bomb destined to be dropped on Hiroshima, was sunk by a Japanese submarine just after midnight on July 30, 1945 in shark–infested waters.  The ship sank in about twelve minutes and almost three quarters of the 1,195 man crew eventually perished – the largest single loss of life in the history of the U.S. Navy.

Fred Hart survived on the raft adrift for five days before rescue.  Since Fred Hart was a radioman on the ship, he had to testify at a subsequent inquiry that he indeed had made a call for help before abandoning the ship.  However, the rescue was initiated by a passing patrol plane that spotted the survivors.  Note: in a search funded by the late Paul Allen in August 2017, the wreckage of the Indianapolis was located in 18,000 feet of water in the Philippine Sea.

When Fred Hart returned to a much more sedate life back home, he continued to work at a series of jobs until starting at Tektronix in 1951.  He worked in production for about ten months and then found a home in sales in July of 1952.  After working in the Sunset plant Sales Office he was sent to the Dayton field office and later worked in sales in the San Francisco sales office.

This March 1953 TekTalk provides some insight into his background and adventures in the workplace.  Click on the image to view the PDF. 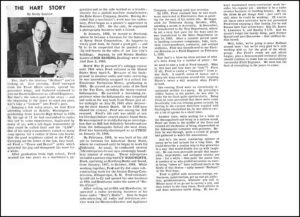