The earliest reference we can find to semiconductor development at Tektronix is this reference in the 1958 Photo Album consisting of Jean DeLord, Tom Hutchins, Bill Meyers, and Paul Parks

This Display Devices Development group roster shows that the Semiconductor Devices Department had grown to in 21 employees by 1964. 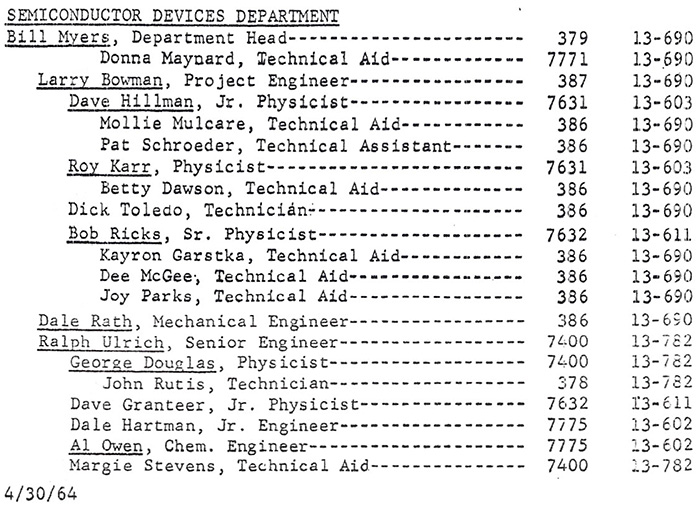 The 40th anniversary Winning With People: The First 40 Years of Tektronix book provides these integrated circuit references on the timeline pages:

On page 220 it gives this account of Jean DeLord's involvement:

Engineering, which Ropiequet had directed, had been split into the Future Products Group which Ropiequet continued to lead, and the Electro-physics Research Group, under Jean DeLord. Ropiequet's group pursued a number of exotic alternatives, among them the abortive counter-tube. DeLord's gang worked on such diverse projects as semiconductors, integrated circuits, and a transmission electron microscope.

On page 251 it gives this account of Bill Walker's involvement:

Behind the personable, "aw shucks" Missouri exterior of Bill Walker lay a tough-minded managing engineer, whose credibility with his engineering colleagues was matched by his abilities to pull off complex organizational changes. The proponent of Tek's integrated-circuit program in the late sixties.

On page 260 it continues with:

During his participation on Polits' staff, Walker became convinced that there was a gap in the company's planning and development, a gap he decided to fill: "I went off and got myself a little back ground in what was going on in integrated circuits and started the beginning of the integrated-circuit operation." "We scraped up everything that was left over from the old Jean DeLord semiconductor troupe . . . and we put together our first IC operation . . . back in the corner of the new building [50] as it went together." Walker and his IC boys got a big boost from the 7000 Series project, which made use of the new Tek-made integrated circuits. "We started designing ICs for those darned things at the sametime we were trying to get our IC plant up and running; everything was new, everybody was learning, but we did it. The very first 7000 Series scopes that came out had Tek-made ICs in them out of our little bitty facility there."

Now, retrospectively, Howard sort of works, he keeps bouncing until - with crazy ideas - until you find a solution he's satisfied with, and then he'll just not mention it any more. And he wanted [digital] readout on the sensitivity and sweep frequency knob setting in the 7000 Series. We pursued all sorts of schemes ... until between Les Larson and Barry Gilbert, we ended up with an integrated-circuit implementation, which probably was the first readout that we ended up selling. Worked like a charm. It was electrically encoded, but that took two and a half years, about, to cook up. And another thing, it was the first application of ICs [integrated circuits]. We were designing IC processes and devices and products all at the same time. 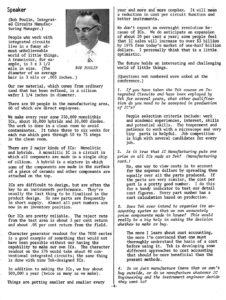 This November 15, 1974 TekWeek features an article on IC manufacturing.  Click on the image to view the PDF. 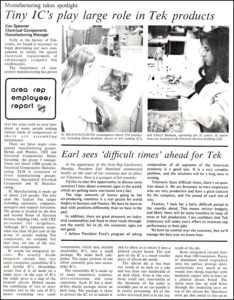 Tektronix built the Microelectronics Building 59 in 1980.  Some of the technologies were sold as components and later spun off as independent companies. In 1985 they spun the GaAs IC group out as Triquint. In 1994 Tektronix sold their IC group and building 59 to Maxim. More information on various technologies is on our Technologies and Salable Technologies page.