Logan Belleville was born in 1909 in Twin Falls, Idaho. As was the case for many budding electronic engineers of the time, he honed his skills in radio technology in his early years and built his own oscilloscope in the 1930's before they were commercially available. He worked as a radio engineer at the U.S. Forest Service facility in Vancouver and during World War II was recruited to join the staff of the prestigious Radiation Lab at MIT in Cambridge MA.  There, like Howard Vollum, he contributed to the development of radar systems in support of the war effort.

After his radar work in the states and in Europe was completed he returned to the U.S. Forest Service radio laboratory in Portland. When the Forest Service chose to move their facility back East in 1948, he was motivated to join a startup called Tektronix after being recruited by Jack Murdock. He was the second electronics engineer in the company.

Belleville was one of the few early senior people at Tektronix who didn't serve in the Coast Guard in World War II. While the company's founding engineer Howard Vollum was exquisitely practical in his designs, Logan Belleville was more interested in theory.  However, they both were dedicated to quality and to making the best possible instrument, almost regardless of cost.

Logan Belleville was responsible for improvements in the Type 511 scope as well the design of the Type 512, the Type 517 and Type 104 and 105 square wave generators. He was permitted to purchase an early equity position in the company and was seated on the Board of Directors.

A rift developed between Howard Vollum and Logan Belleville regarding Howard's revolutionary scope plug-in concept - Howard felt it provided customer flexibility and value while Logan Belleville believed the concept diluted quality and performance for the most demanding customers - a sort of 'jack of all trades but master of none' argument. Because of this issue and perhaps other factors, including his interest in returning to school to earn a Ph. D., Belleville decided to sell his Tek shares back to the company and leave Tektronix in 1953. The departure of Milt Bave and Miles Tippery would follow later in the same year.

This February 1952 TekTalk features an article by Logan on climate control at Tektronix.  Click on the image to view the PDF. 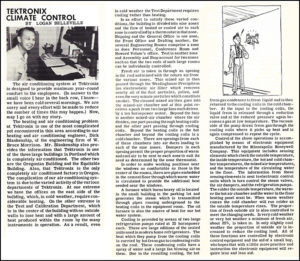 This February 1953 TekTalk provides some insight into his background prior to Tektronix.  Click on the image to view the PDF. 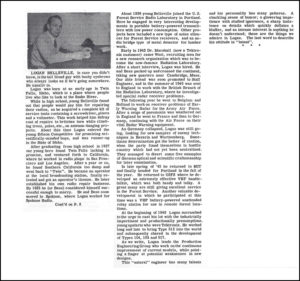 Logan is also featured in other articles on the internet.   This Oregon Encyclopedia article on the Forest Service Radio Lab mentions Logan.  Click on the image to view the page (note you are leaving the vintageTEK website). 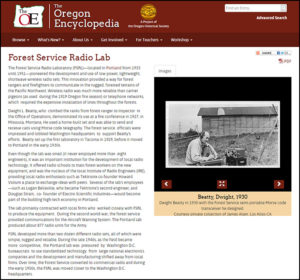 This Forest History Society Chapter VI features Logan's work with the Spokane Radio Company.  Click on the image to view the PDF (note you are leaving the vintageTEK website). 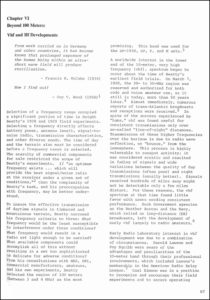 This January 1942 issue of Electronics features an article on a 30 - 40 Mc receiver authored by Logan and Harold Lawson on page 22.  Click on the image to view the PDF (note you are leaving the vintageTEK website). 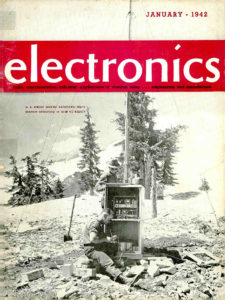 The museum also has letters of recommendation written for Logan in 1929. 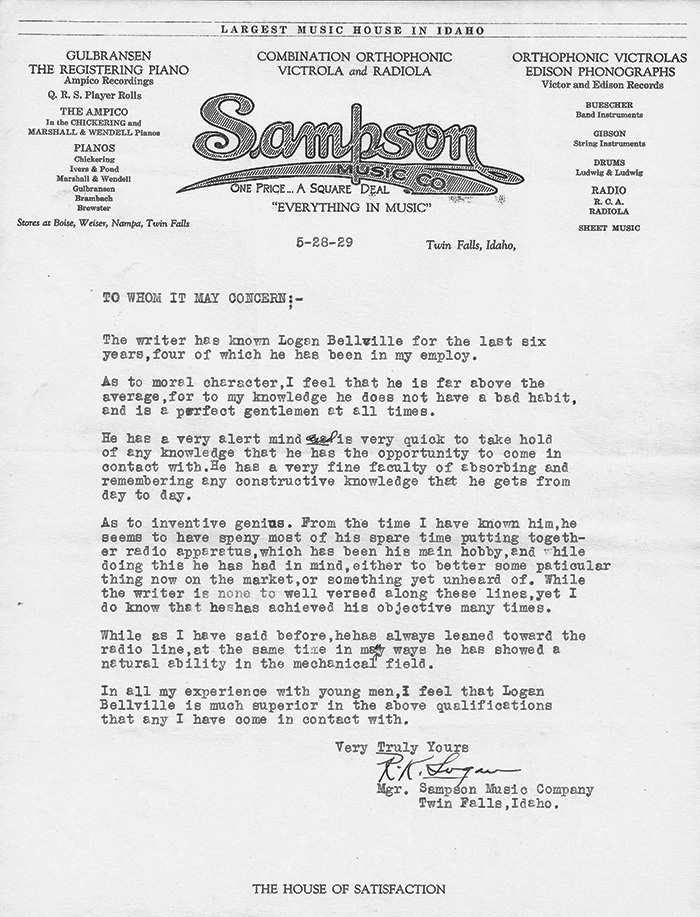 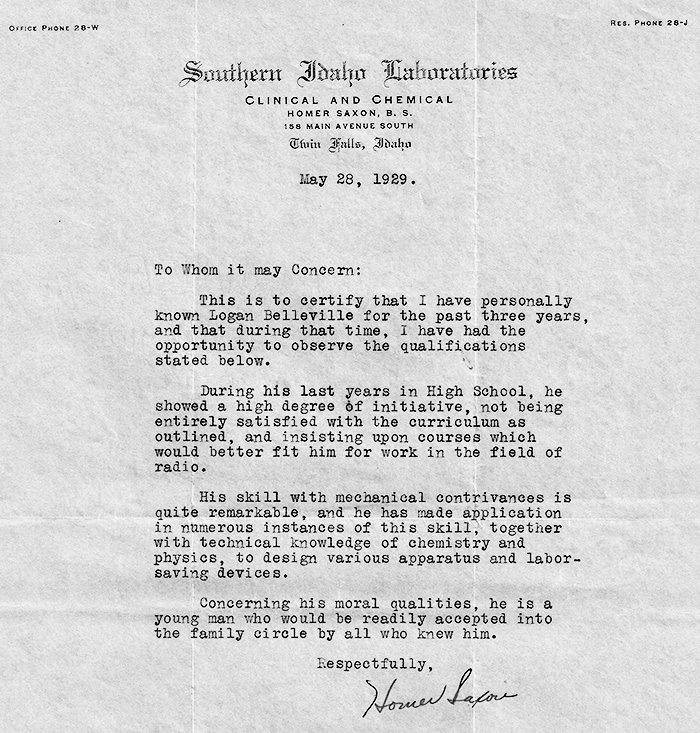 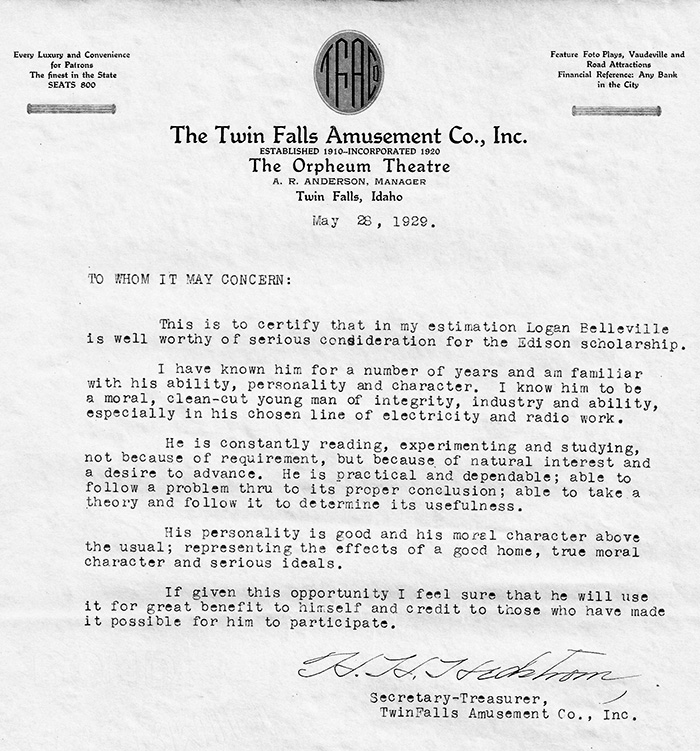 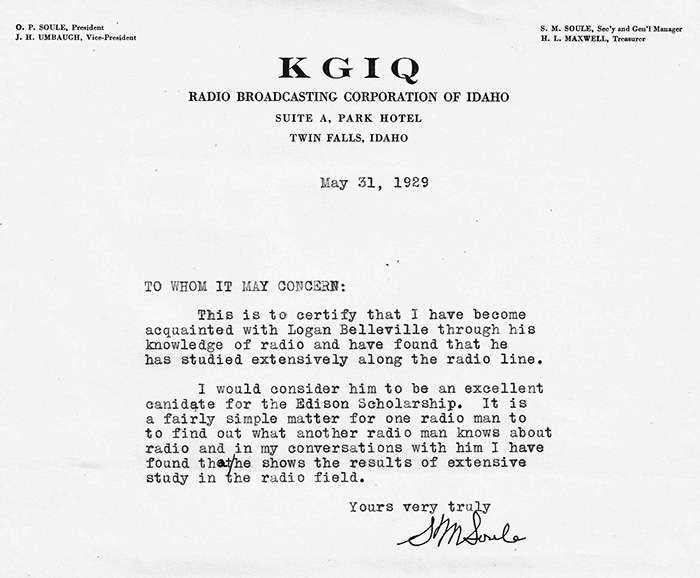 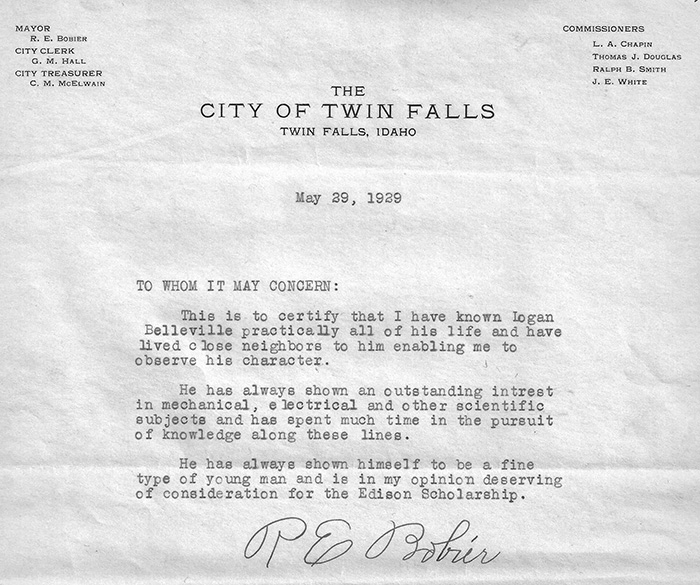 This article was in the Tektronix Retirees Volunteer Program September 1998 newsletter. 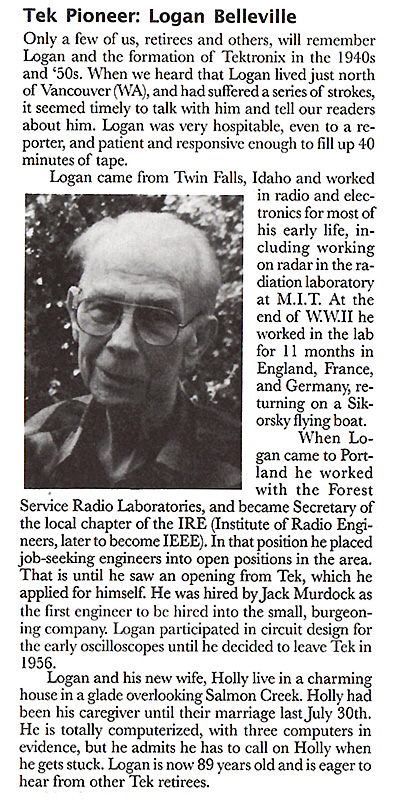 Logan died on January 8, 2000 at the age of 90. This notice was in the Tektronix Retirees Volunteer Program January 2000 newsletter. 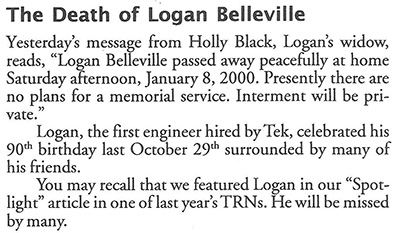