The museum was contacted by volunteers restoring Site Summit near Anchorage, Alaska, about obtaining a representative oscilloscope for the facility. Commissioned in 1959, it is one of three Nike Missile sites that protected Anchorage, Elmendorf AFB, and Fort Richardson during the Cold War, and one of 145 Nike Hercules missile sites constructed across the nation from 1957 to 1960.

Museum volunteer Tom Goodapple cleaned and restored a Tektronix 545 which was shipped to the site which is only accessible a few months of the year.

The 545 successfully made the journey and is now at Site Summit. Restoration of the site is still on-going but they sent us a photo of the 545 with this signage:

This vacuum-tube-based tool was used by radar technicians to analyze signal voltages.  The system displayed variations in signal, allowing the rapidly-pulsing radar signals to be viewed and analyzed as a waveform on the display screen.

This model is the same type used by radar technicians during Site Summit’s operational period.  It was donated by the vintageTek Museum in Beaverton, OR, the home of the firm that manufactured this equipment for the military during the Cold War. 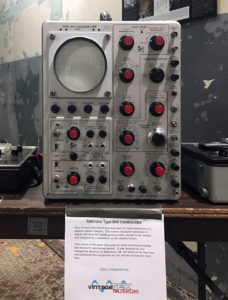