The family of the late Dr. Gertrude Rempfer donated the Tektronix Electron Microscope prototype that the Tek group was working on around 1968 when the project was canceled. Bruce Baur, John Addis, and Ed Sinclair, assisted by Gert's son Willie Rempfer loaded the estimated 1000lb system on a rented trailer, and delivered it to the Museum two weeks ago. Dr Rempfer died at age 99 recently, and had been the Physics Dept Director at Portland State University for many years. During the filmong of The Tek Spirit DVD produced by OPB, Gert told Ed that Howard Vollum himself hired her in 1963 to do research. Gert had been a Professor at Pacific University and in 1962 assisted Tom Holce, a Pacific graduate, with his electron microsope development, which he later incorporated as Mikros, Inc. He later sold the design to Varian. Following her stint at Tektronix, Gert then spun out with several Tek people forming Elektros, Inc in Tigard. They produced approximately 40 SEM models, the majority of which were either sold or loaned, before Elecktros shut their doors in the mid-seventies. Dr Rempfer acquired many of these units, and stored them in her basement. She carefully donated units over the years to key organizations or individuals working in her fields of interest. Dr Rempfer, to my knowledge, was one of the only persons to have "spun-in" to Tektronix in 1963, and later "spun-out" of Tektronix with two Companies that are on the list comprising the Silicon Forest! 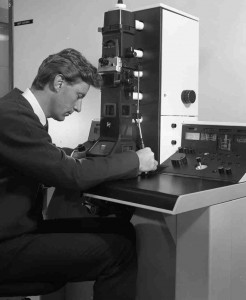 The attached photo of the Tektronix Electron Microscope operated by Bert Cathery somewhere inside Tektronix in the 1960's. Even if we do not get this unit operational, we hope to at least restore it's original lustre. Please contact the Museum if you have notes, drawings, or micrographs produced by this machine. We need to sort out what we have been given, between this machine and micrographs produced with the SEM models (Elektros?)