↓
Home→Uncategorized→Tektronix and the Hubble Space Telescope

Did you know Tektronix developed technology made its way to the Hubble Space Telescope? This March 24, 1989 TekWeek features the CCDs that were installed on Hubble. Click on the image to view the PDF. 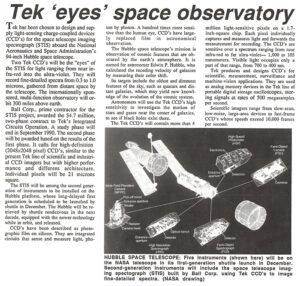 This 1990 Focus On Tek Volume 6 Number 3 discusses the Hubble Space Telescope and an overview of CCDs.  Click on the image to view the PDF. 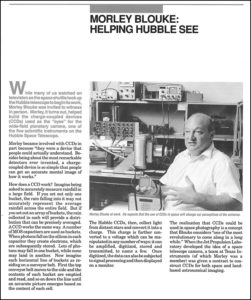 Unfortunately a significant flaw in the mirror construction prevented property telescope operation. The Tektronix imagers were swapped out as part of corrective optics and instruments installed in 1993 to compensate for the mirror flaw. Tektronix continued to improve its CCD imagers and more information is on our Charge Coupled Devices (CCD) page.

In 1993 the CCD Products Group was spun out of Tektronix to form Scientific Imaging Technologies, Inc. (SITe). SITe continued to develop CCD technology for in-orbit installation in 1997 on the Hubble Space Telescope. The CCD developed at SITe, formerly the Tektronix CCD Products Group, is for coverage of the 305 - 1000 nm region for the space telescope imaging spectrograph (STIS) instrument.

These two abstracts on the space telescope imaging spectrograph describe the use of the CCD developed by SITe. Morley Blouke is one of the authors of the first abstract.

Thus technology developed at Tektronix found its way onto the Hubble Space Telescope.