This article was first printed in the December 1964 issue of TekTalk.

Roads in Tektronix Industrial Park have been named after three outstanding scientists who have contributed much to physics and electronics: Robert A. Millikan, Dr. Knowlton and Karl Braun. This article will discuss some of Dr. Knowlton's contributions. 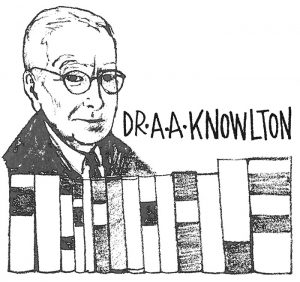 During his 33 years at Portland's Reed College, Dr. Ansel A. Knowlton won nationwide recognition for his skill as a professor of physics. He was most widely known for three things: The quality of the students he trained; his textbook, which revolutionized college physics instruction, and a lifelong espousal of individual academic freedom.

Mr. Knowlton was born in 1875 in New Portland, Me. He graduated from Bates College, where he took general courses with an emphasis on classics. Interestingly, he took only one course in physics.

After graduation he heard Carleton College, Northfield, Minn., was looking for a science teacher and coach. He enjoyed sports, and he had always figured he would end up teaching either physics or chemistry. Thus he (1) coached track and (2) chose physics as a career. Later he had teaching jobs at Northwestern university and Armour Institute. He received his Ph.D. in physics from the University of Chicago in 1909.

That year he joined the faculty of the University of Utah. This association lasted six years. Then he and two other faculty members were fired, in an academic uproar that resulted in the first investigation by the Association of American University Professors of infringements of academic freedom. Dr. Knowlton was vindicated by the AAUP after its investigation. Twenty other faculty members quit in protest over the firings.

This was 1915, and Reed was looking for someone to replace Dr. Karl T. Compton, who later became president of MIT, as head of the Physics department. Dr. Knowlton was the right man. His thirty-three years at Reed offer proof.

Through this time, his approach to physics was as independent as was his approach to academic freedoms. He believed in curiosity and, what was even more radical for his time, a humanistic approach to the subject. He felt physics was a part of life, and he believed it important to know the famous individuals of physics as well as the knowledge they developed. He taught that physics wasn't something by itself, but a part of human endeavor, a study for people, not a study of things.

Once, describing his attempt to explain to a college president his notions about teaching physics, Dr. Knowlton said "Even then I had seen too many cases in which the content of a course in General Physics at its completion must have seemed to the student somewhat like the contents of an art gallery or museum; that is, like an orderly array of pictures and artifacts all completed, framed and hung upon the wall or stored in cases safely locked against meddlesome hands.

"My idea, which I tried to explain to this president, was that such a course ought to appear as a series of glimpses into studios and workshops in which artists had worked, and were still working, upon objects of interest which always remained in some respects unfinished ...

Small wonder that the good man escaped as quickly and tactfully as possible, trailing behind an unfinished ' ... and if you should change your mind ...' The imagined disorder of such a course must have shocked him beyond expression."

Through his years at Reed "the imagined disorder" of his approach to physics, as he early in his career described it, may have shocked some students. However, it appears to have shocked them into great accomplishments.

The young men Dr. Knowlton turned out from his Reed laboratories began distinguishing themselves almost immediately. A later study brought to light the true scope of his teaching achievements. This study of the origins of men listed in "American Men of Science" (a "Who's Who" of science) showed that in proportion to the size of its student body Reed had placed almost twice as many physicists -~ on the list as any other American college or university. On a straight basis, Reed had contributed as many names as Columbia, Johns Hopkins and Princeton, and more than Stanford, Illinois and Pennsylvania!

A later study tabulated the undergraduate origins of all physicists granted Ph.D.s between 1936 and 1945. Reed again found itself with the big schools. Yale, Ohio State and the University of Washington were barely ahead of it and Purdue, Dartmouth and UCLA behind it.

In 1947 he received an award from Research Corporation for outstanding teaching and in 1952 the Hans Christian Oersted award from the American Association of Physics Teachers, the highest award given teachers of physics.

His text "Physics for College Students," published in 1928, approached physics from the humanistic rather than a purely technical view. This text and later editions were widely used.

Atomic energy was one of Dr. Knowlton's special fields. Some of his students worked on producing the first atom bomb, or on research that led to the bomb.

Dr. Knowlton, in work for United Airlines, was asked to solve the problems of blotted-out radio beams on planes. He found static electricity was causing the blotting, and that placing a wire and resistor trailing off the wing of the plane would bleed off the static electricity.

His hobby was golf. In the late 1930s he was a runner-up in the Oregon senior men's golf tournament.

Dr. Knowlton remained at Reed until 1948. Although 72, he taught two more years at Bennington College, Vt. He returned to the· Portland area and made his home with his daughter, Mrs. Kenneth Johnson of Beaverton, now registrar at Reed. He died in 1957.

As the Portland Oregonian said “Over the years at Reed, Knowlton became as much a part of the campus as the buildings.” To physicists in eastern college graduate schools, who watched in amazement the steady file of top-flight young scientists who came to them from a little school in the Northwest, A. A. Knowlton was Reed College.