Our Grand Opening was very successful following the excellent article appearing on the Front Page of the Business section of the Oregonian Thursday September 15, 2011. We had over 200 visitors, with donations exceeding our highest expectations. 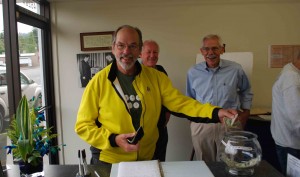 Visitors started arriving ahead of the 9am opening on Friday with many notable ex-Teks. One of the first was Ward Cunningham, the Father of Wiki, who I had never met.
Many other long time ex-Tek personnel appeared, including John Kobbe, Scott Foster, and Deane Kidd coming by earlier in the week. Another hundred ex-Teks cannot be named due to space restrictions. Thank You All. 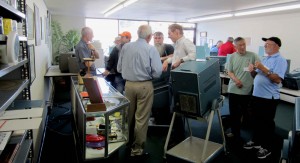 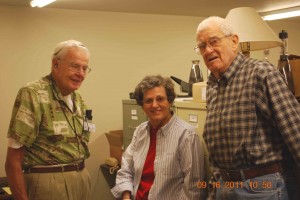 John Kobbe and the Fosters in our Library

Bruce and Nancy Baur did a wonderful job donating snacks, sandwiches, and even cases of wine which I believe most visitors enjoyed. All I heard were compliments! All the Volunteers were very helpful, and much apprecaited.

The Museum will be open Fridays and Saturdays beginning September 23, 2011.

We are located at 4620A SW Beaverton Hillsdale Hwy, between Shattuck and 45th, E of OR-217