Tektronix began working on digital or automated test systems in the mid 1960s. Earliest systems were used at Western Electric in Chicago and IBM wafer manufacturing facility in California. These systems had DEC minicomputers for programming  in place of the Wang block reader and paper tape as later used on the S-3001, the first commercial automated test system. We have a photograph of this system with 6 individuals. 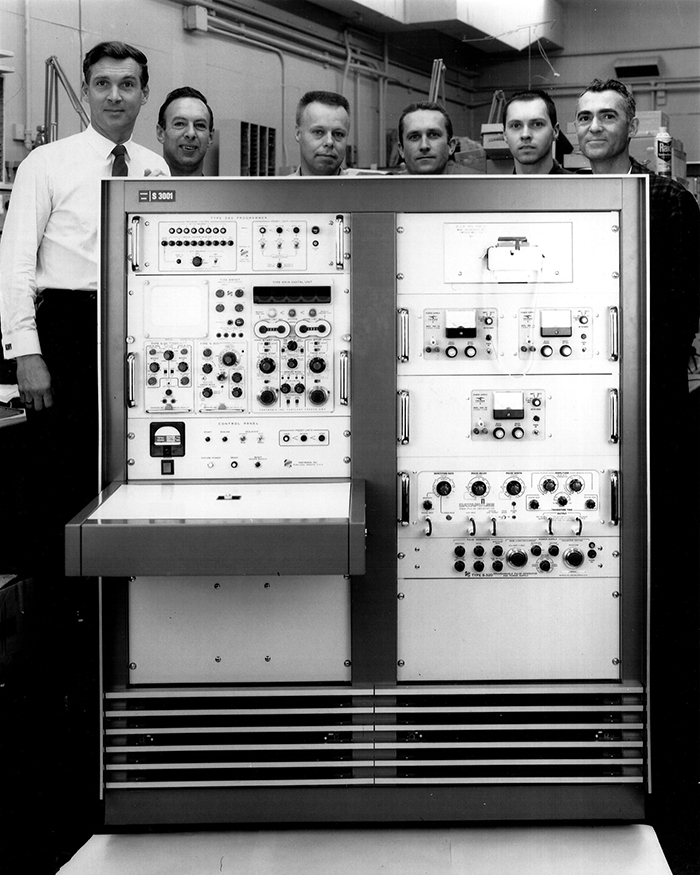 We believe we have identified most of the individuals in this photo. We are not sure about Fred Nickel so let us know if you recognize the 4th individual above.

This August 1964 S-3401 brochure provides a great overview of the system capabilities. Click on the image to view the PDF. 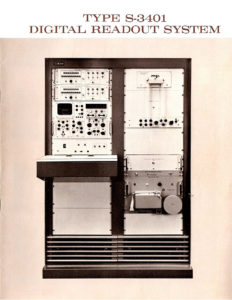 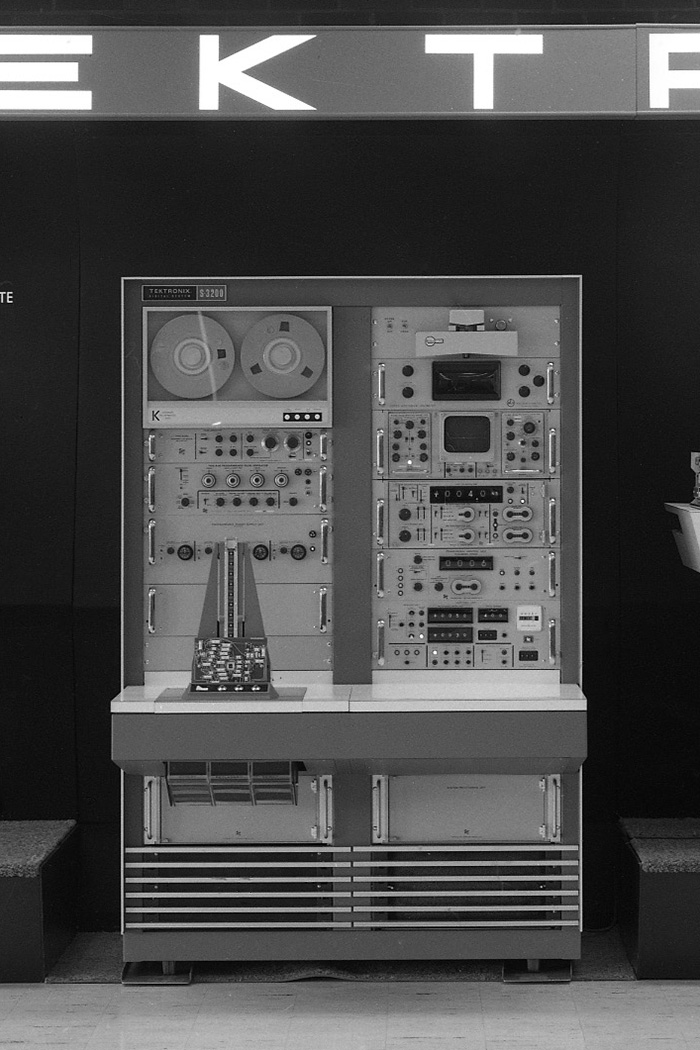 This February 1967 brochure describes the S3200 in detail. Click on the image to view the PDF. 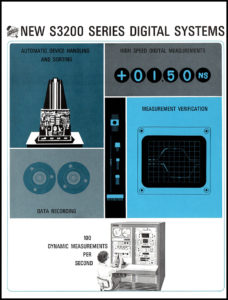 This photo is of a single rack of the S3200 test system. Jim Geddes is pictured on the right. We think the left might be Bruce Keefer. 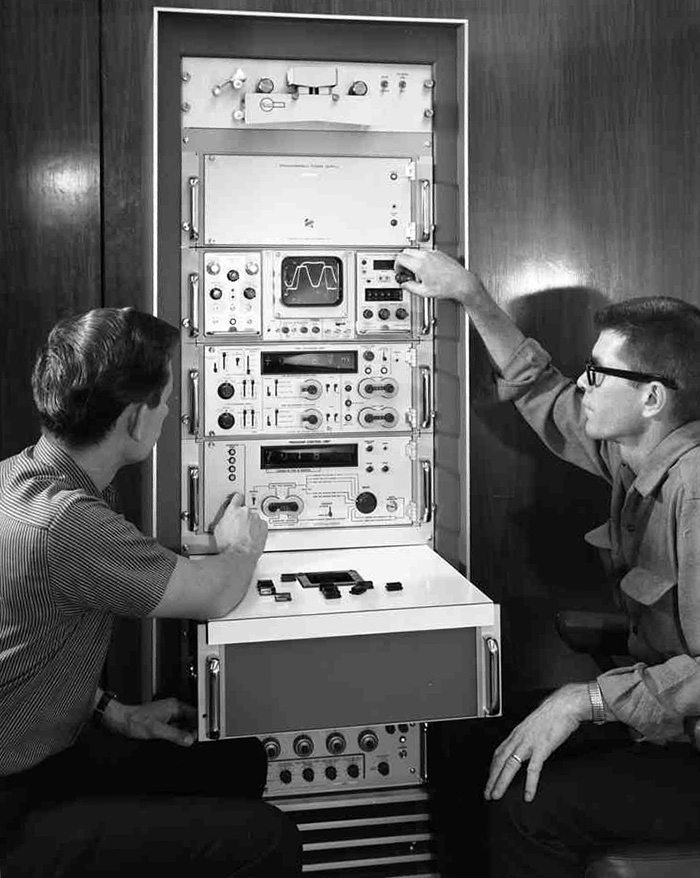 The S-3130 first appeared in the 1968 catalog. Later on these systems were not included in catalogs.

Hank Crombe, who worked at the Instrumentation Lab at MIT in 1968 used a Tektronix S-3130 Automatic Test System for testing components for the Apollo guidance computer.  Hank wrote his story MIT Laboratories which is on our Customer Stories page. 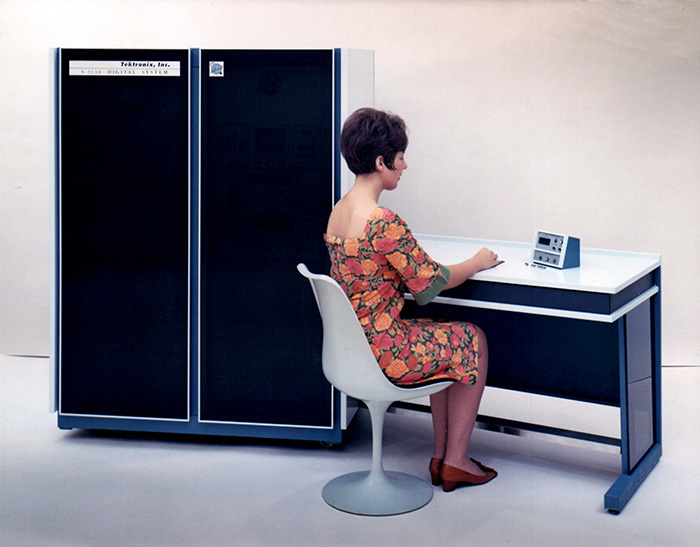 This photo is of Carl Helmer with the S-3130 test system. 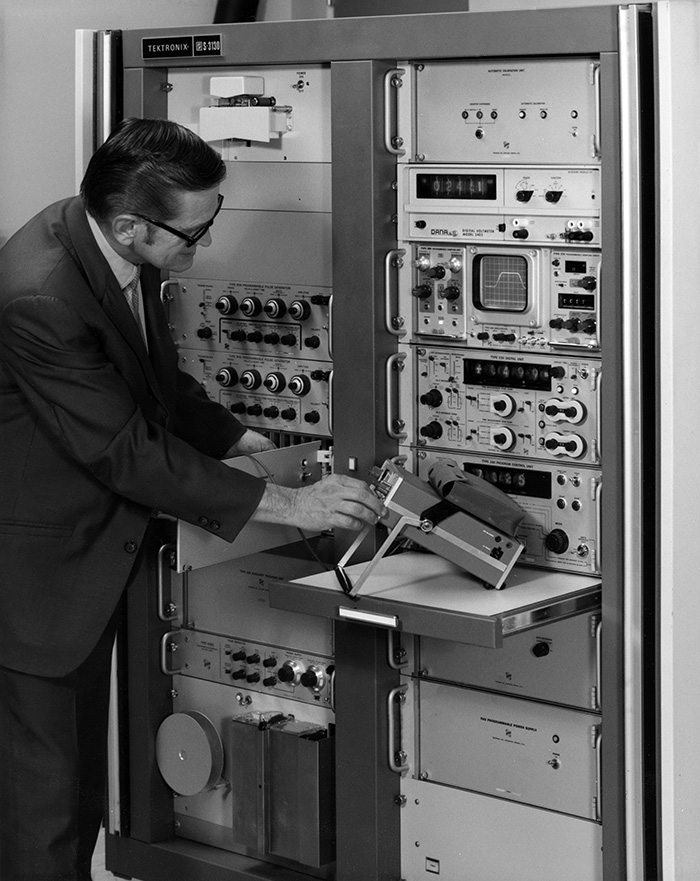 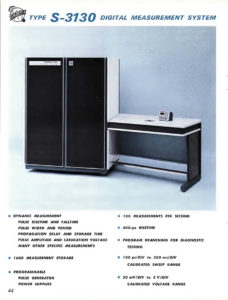 This preliminary set of specifications for the S-3150 is dated December 1, 1969. Click on the image to view the PDF. 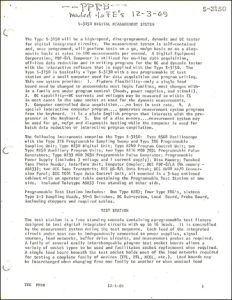 Eventually these efforts were focused into the Semiconductor Test Systems (STS) division located at Walker Road. This excerpt from the Winning With People: The First 40 Years of Tektronix describes the major market for these systems.

Logic analyzers were not the only part of Tek's product line aimed at the digital and microprocessor sectors of the electronics industry. Early in the seventies, Tektronix began to manufacture automated test systems, primarily to test the company's own ICs and circuit boards. As part of the Design Automation Division, automated test systems moved in 1977 to new quarters on Walker Road, west of Beaverton. By the early eighties, the "S" series semiconductor test systems made their appearance. Custom designed and selling for over $1 million per copy, the semiconductor test systems aimed to penetrate the "superchip" market. Superchips, or very large-scale integrated (VLSI) circuits, contain tens of thousands of electrical components. The S-3295 semiconductor test system put VLSI chips through a series of programmed digital tests, comparing how the component functioned to how it ought to function.

Market conditions favored Tek's entry into the semiconductor test system field, for as more and more companies (Tektronix included) began to produce their own VLSI chips, more companies needed the test systems. The strong point of Tek's systems has been device characterization, the potential of the system to push the test chip to the limits of its performance. Given the growing emphasis in the electronics industry on quality control, the Tektronix system found a very warm reception. 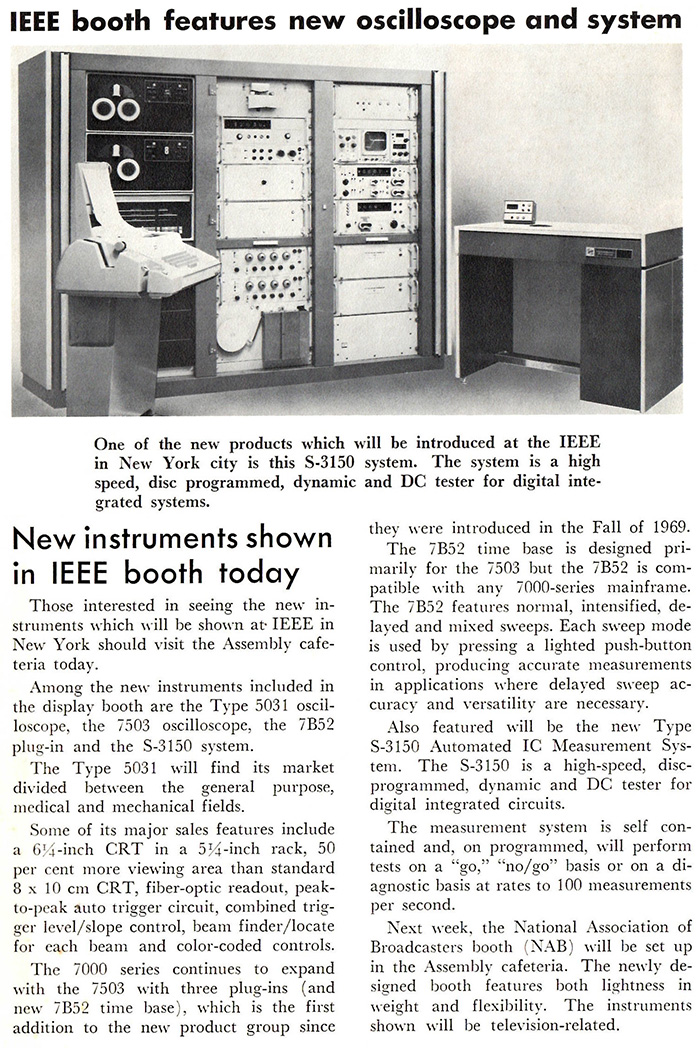 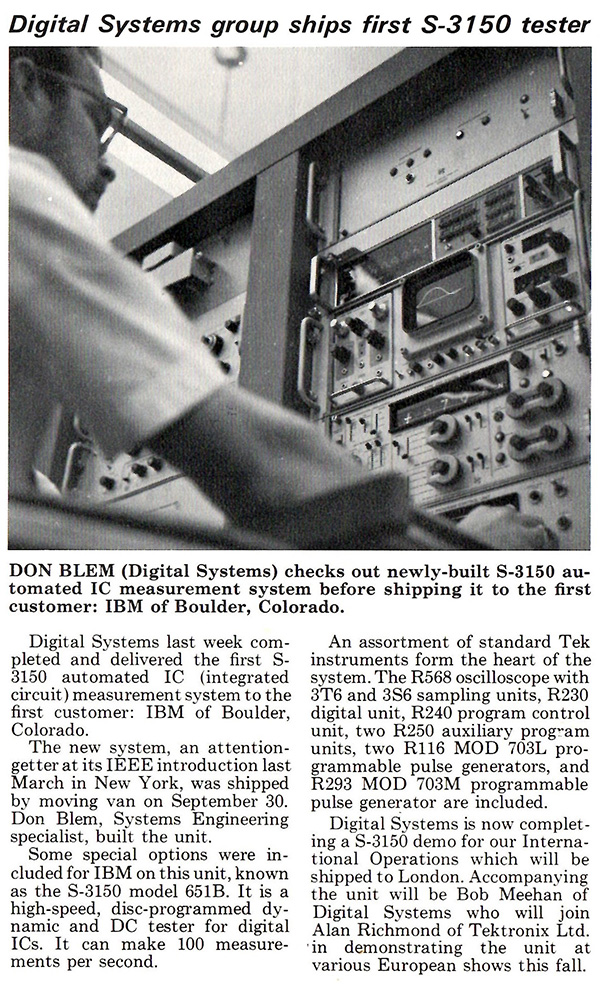 This April 26, 1974 TekWeek features an article on the development of the S-3260. Click on the image to view the PDF.

This April 18, 1975 TekWeek features an Area Rep update on the Measurement Systems group. Click on the image to view the PDF. 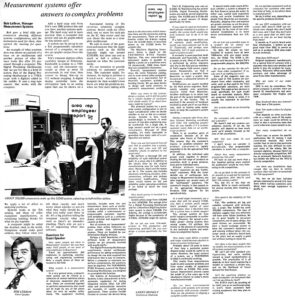 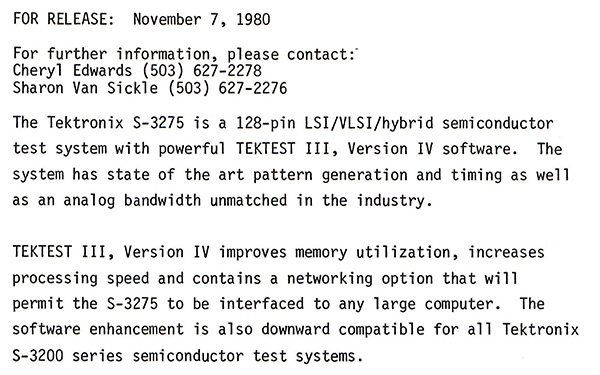 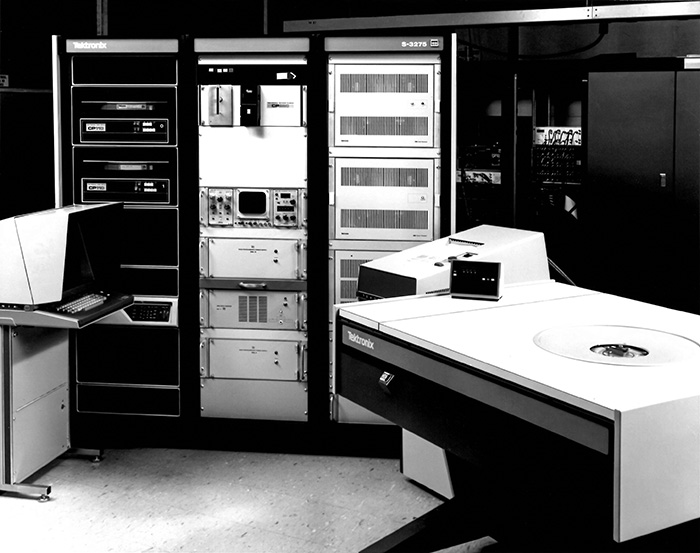 This August 15, 1980 TekWeek features a milestone in system shipments. 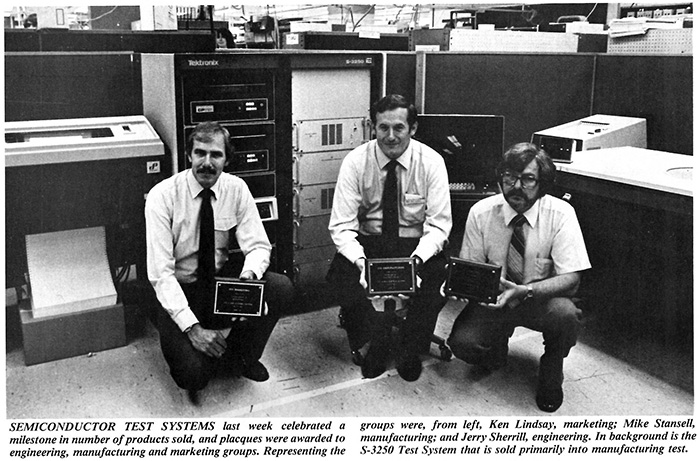 This December 11, 1981 TekWeek article features the introduction of the S-3220 IC Test System in Europe.

This page from the 1981 Annual Report features the internal use of the S-3260 Semiconductor Test System. 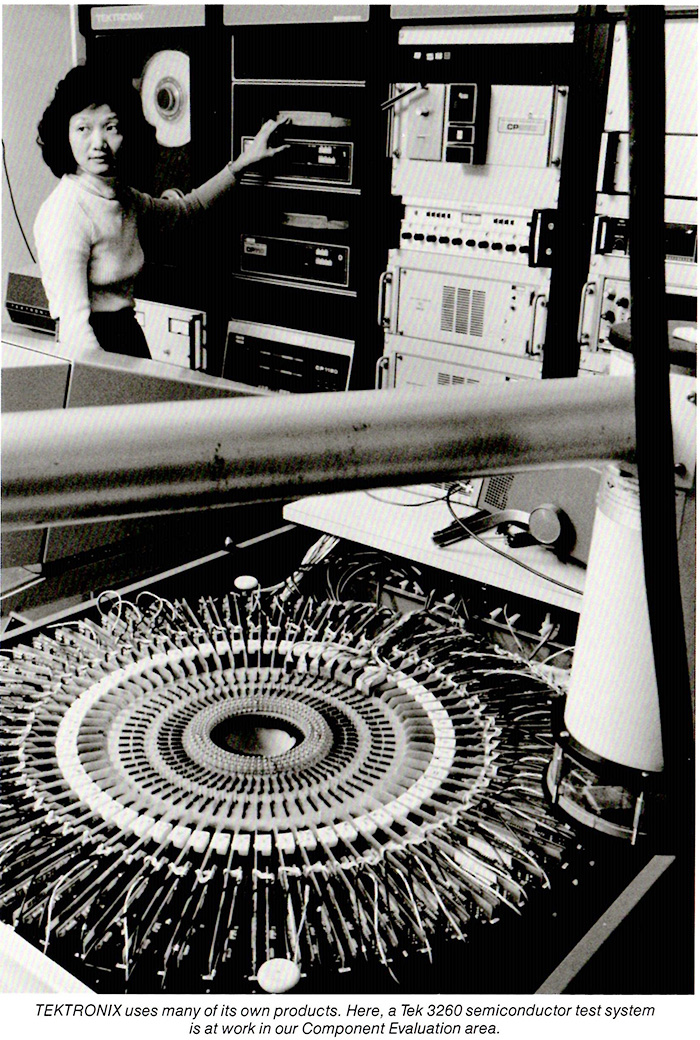 The S3225 was introduced at the International Test Conference (ITC) in 1985. 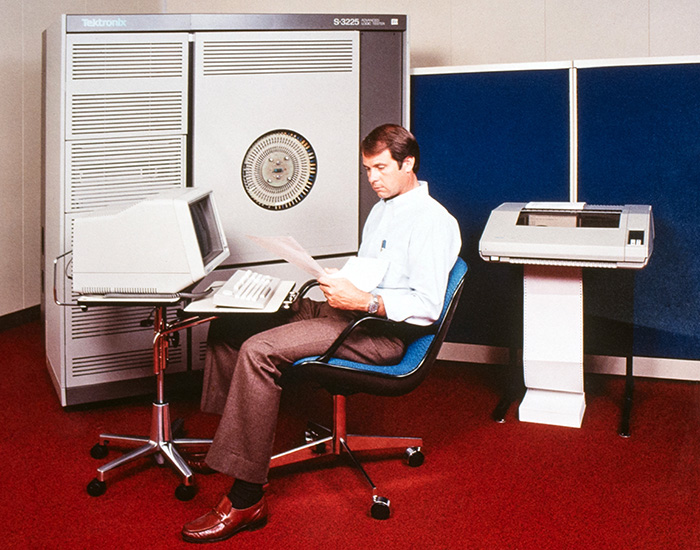 This November 8, 1985 TekWeek features the first customer acceptance of a S3225 by RCA. 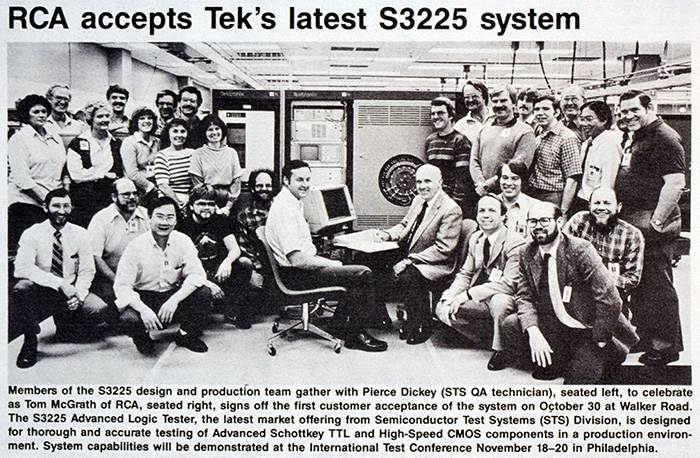 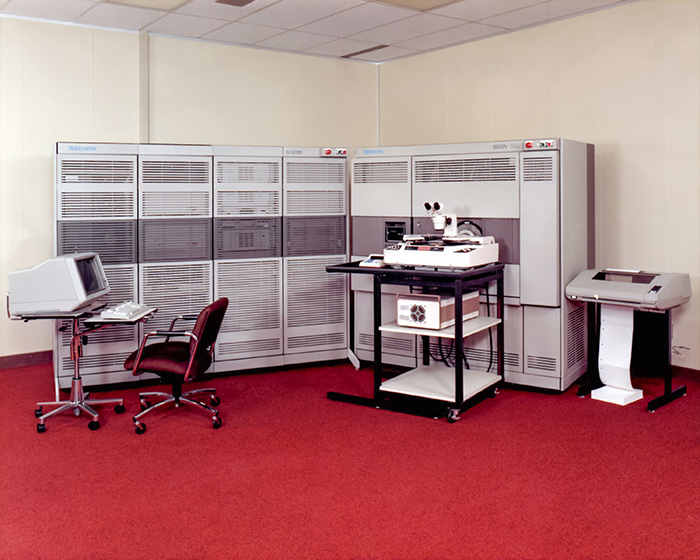 We do not know any details about this compact LV500 ASIC Design Verification System. 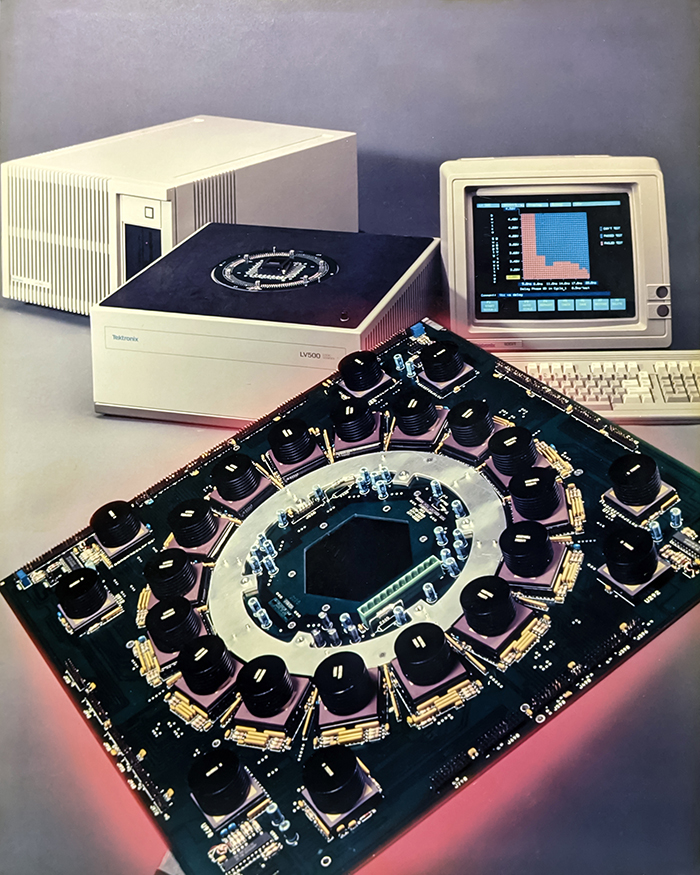 The photos in this slideshow of automated test systems were displayed at the 1989 International Test Conference (ITC).

The photos in this slideshow are of various employees and items in Semiconductor Test Systems.

In 1990 Semiconductor Test Systems was sold to Credence Systems Corporation.