Tektronix Measurements of EMP from Nuclear Detonation by Hale Farley

Hale Farley started at Tektronix on August 1973 as the SPS (Signal Processing Systems) Marketing Engineer for Bob Hightower. In 1977 Larry Sutter recommended he take an assignment in the field and he started as a SPS Sales Specialist in Santa Clara working for Bill White. There he achieved Sales Master three times. Following his SPS assignment he joined STS (Semiconductor Test Systems) as a Sales Engineer for Dan Senior, finally leaving Tektronix in 1987.

The history of nuclear development has been well documented elsewhere. What is not documented, as far as I know, is the electrical measurements in nuclear research attributed to Tektronix test equipment.

The scientific community has long used mathematic equations to explain the interaction of various elements. Practical applications of these math principles leads to useful means to explain phenomena in nature. Nuclear reaction is just one of the many applications. In order to understand some method must be developed to view the results hence Tektronix instrumentation. My work at Sandia National Laboratories helps me understand the need to display the results of any reaction related to nuclear phenomena.

When a nuclear detonation occurs, a large amount of radiation is released. The scientific community accurately predicated some of the results starting at Trinity site in New Mexico. But not all the energy released could be accounted for; hence some invisible energy is present. During the upper atmosphere test in the south Pacific (Dominic series), engineers discovered all aircraft electronics would be destroyed if operating at the time of the detonation. The pilot knew this and powered off all electronics in the C130 until a large displacement of air passed the airplane. (I believe the displacement was about 1200 feet even at 20 miles away from the detonation. The airplane would be upended for a short period of time at least 45 degrees.) Dr. Clarence Benton decided he would do an experiment in the back the C130 some 20 miles from the detonation. I believe he used a Tektronix 445 portable oscilloscope with battery power and a one-meter wire through a grommet set to trigger on signal. Not sure what to expect for vertical setting, he made a wild guess and set it on least sensitive vertical per division. The results were the first measurement of electromagnetic energy from a nuclear detonation. The photograph showed a rising edge of the pulse going off scale and sometime later the tail return to viewing area. Dr Benton told me, it extrapolated to some kilovolts per meter.

The R7912 was a perfect fit for recording phenomena related to nuclear detonations and electromagnetic energy released. Its output is already in digital form thus goes directly into computers for analysis. Identifying problems comes first to find solutions. How to protect mission critical components from electromagnetic energy is necessary for delivery systems? Electromagnetic pulse (EMP) measurements became a necessary part of “hardening” the electronics in delivery systems. The source of EMP energy is a nuclear detonation. During the late 1960’s and mid 1970’s lots of effort was spend to hardening key components in delivery systems. Because it was expensive to do nuclear testing, it was discovered a Marx generator could deliver EMP energy similar to a portion of the electromagnetic spectrum from a nuclear detonation. Several government contractors around the country wanted to test vulnerability of components to EMP.  Test facilities needed R7912’s to measure EMP.

Project Trestle in New Mexico was one of these test platforms. The system utilizing 26 R7912’s in this TekWeek article was the system selected to make the necessary measurements. It was a dual system with thirteen R7912’s on each side with a duplicate computer system. Click on the image to view the PDF. 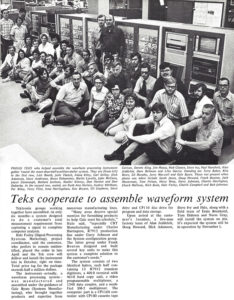 Trestle is a wooden structure over a canyon in New Mexico. It could not have metal in it since EMP energy would be channeled away from the test vehicle. Test vehicles come in many forms, from a B52 bombers to small subsystems. A Marx EMP simulation generator would send EMP energy into the test specimen and the sensors would send information to the R7912s. At least three types of sensors mentioned in some of the documentation from Dr. Carl E. Baum that were used for testing at Trestle: Rogowski loops, B-dot, and D-dot.

Wooden laminated structure of Trestle was held together with wooden pegs and fiberglass bolts. A few metal bolts less than 12 inches in length were used. A Google search reveals much about the construction from a paper by Dr. Carl E. Baum at the University of New Mexico Electrical & Computer Engineering. Trestle still exists, although it has not been used for more than 20 years. It is capable of supporting 100 ton aircraft as well as small subassemblies. I remember a version of Air Force One was test on Trestle. The R7912 system was used from the mid 1970’s until de-activation in late 1990’s (more than 25 years).

In 1976 Tektronix hired Dr. Benton to join me on a six-country tour of Europe to discuss EMP simulation and how to measure key elements of delivery systems. We did three countries the first week starting with England, then France followed by Germany. Following the trip Dr Benton was de-briefed by US intelligence agents who want to know all individuals who attended the presentations.

Dr. Benton passed away a few years later from complications he suffered when the U.S.S Indianapolis was sunk during War II. It was the ship tasked to carry the two nuclear weapons to Tinian Island in the South Pacific before they were dropped on Hiroshima and Nagasaki, leading to the end of the war. The Indianapolis was torpedoed by a Japanese submarine shortly after the delivery and sunk in a matter of minutes. The majority of the crew survived, but many died in the water due to deprivation and shark attacks. Dr. Benton was in the water for several days before rescue. A book “In Harm’s Way” by Doug Stanton tells the story and lists Dr. Benton as a survivor.

The Navy became interested in how to protect navy assets from EMP. Similar Marx simulation generators focus EMP energy on ships and other assets. Naval Weapon Laboratories want to test ships in the same way airplanes where at Trestle. This resulted in a test facility called CASINO on the east coast. I believe there were twenty R7912 instruments ordered to be installed in an instrument trailer. As I recall there was an issue with GPIB limit to only eight unique addresses. The solution to this problem was a second computer board. This facility has been re-opened as an active test facility.

R7912’s were also used to test vulnerability of delivery systems in place. Boeing purchased several to do field test in silos. I believe EG&G manufactured Marx generator that was the EMP simulator. I believe Boeing purchased eight units, using four in each test.

R7912’s are used in Laser Fusion research. Shiva facility is a 192 beam (Inertial Confinement Fusion) in Livermore has a large number of R7912’s still in use. I believe there are at least sixty R7912’s there. In 1980 I delivered a paper at the Third Electro Optics Conference in Tokyo Japan entitled “Instrumentation for Laser Fusion”. It was well received by the attendees. Sheigo Kobaysahi of Sony Tektronix was my host and remains a friend to this day. In 2008 he invited me with my grandson to visit his home for a week.

Additional markets for the R7912 are ultra sonic testing of weld joints in nuclear reactors, shock tube wave front analysis, and read/write heads for computer hard drives. Some biomedical testing uses the R7912 (conversion of sunlight to chlorophyll as an example. This is a sub-nanosecond event).