Charlie Rhodes joined Tek in 1956 and was to become known as "Mr. Television", but he contributed in other areas as well. One of the first things was his suggestion to add an "Algebraic Add" function to the CA dual-trace plug-in unit while it was still in the design phase. That function allowed users to combine signals (and using an optional "Invert" function) to produce informative displays that could isolate nonlinearities and even assist in understanding logic functions. It was a much different world back then.

He was annoyed by the fact that waveforms were generally displayed on a round faceplate, while Tek's highest performance 'scopes had a 10w by 4h display. That wasted area should communicate more info to the user.

He learned of a firm in New York that was making CRTs that could functionally replace Tek CRTs. One of their tubes had a faceplate for a 10x4 cm display and a rectangular envelope, reducing much wasted vertical space. It had a strange looking helical accelerator, but the geometry actually looked pretty good.

Charlie's mission became one of making good use of that wasted space. In those days we used 'scope cameras a lot, writing settings on the back of the photo and transferring the info into our notebooks. There was now space to put the settings info into the picture area.

We had recently introduced the 543, a 'scope having a wide-range magnifier that went in 1,2,5 steps to 100X. Calculating the resultant sweep speed is cumbersome. 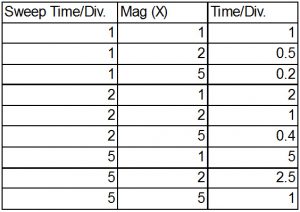 Charlie, master switch designer Henry Fritzler, and I worked out the rotary switch connections that accomplished the math. One of two scribed graticules would be illuminated, the first, having a 4V by 10H division horizontal scale, the other, having a 4V by 3.162H division scale, as appropriate to the Time/Division calculation.

Calibratef variable sweep speed was read out by projecting through 35 mm film moved by sprockets driven by Helipots controlling the voltage drop across the timing resistors that determined the dV/dT of the Miller Run-up sweep generator.

Indication of vertical deflection factor was somewhat less elegant. The legacy use of 1, 2, 5 increments in the vertical plugins necessitated the addition of x1, x10, x100 switches to indicate the probe attenuation (a decade later, 7K series instruments used special coded connectors).  A logarithmic coding scheme was used to cover the range from about 10uV/division to about 500V/division. The analog voltage was generated in the plug-in, reaching the mainframe through a little-used pin, where it went to one side of a voltage comparator having a dead zone. The comparator controlled a Ledex stepping switch that would cycle until the voltage selected by the tap on the Ledex wafer was within range of the voltage from the plug-in.

Again, appropriate lamps would be lit, indicating the vertical deflection factor. Thus, settings of the 'scope could be photographed by an oscilloscope camera, easing the task of waveform documentation.

Predating the introduction of the 7K series instruments, the x544 was a vision of things to come. Rectangular CRTs, display factor readout, and more accurate timebase control came to pass, improving the usability of Tektronix products. 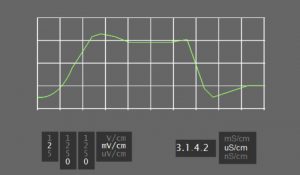 The x544 was shown in August 1959 at the WESCON show in San Francisco as an experimental prototype.