The direct view storage tube (DVST) invented by Bob Anderson in the 1960s had significant impact in multiple industries.  We have a number of different exhibits, articles, and documents relating to the storage tube and will tie them all together in this posting.

The direct view storage tube story starts with a 1966 TekTalk article on our Storage Story page with an article by the inventor Bob Anderson. He points out that his contribution was making an economic breakthrough thus making the storage tube manufacturable and affordable.

The first storage oscilloscope was the Type 564 and is on display at the museum with unique automatic / programmable plug-ins which were very advanced for this time frame. While there were many test and measurement applications for the storage oscilloscope, computer researchers began using hacked 564 scopes and CRTs to make desperately needed interactive computer displays - even though it was only a five inch display! This use opened up a new opportunity for Tektronix to develop large screen storage tube displays and the first non-oscilloscope division was formed and headed up by Norm Winningstad. 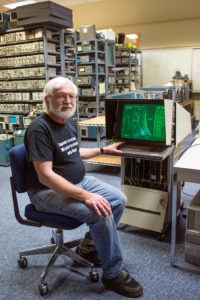 The museum has a number of DVST displays on exhibit at the museum and detailed on our DVST Graphic Terminal page. Our newest addition is a 4014 graphic terminal which is undergoing restoration with the help of Dick Stack and Kurt Krueger.  We also have a 4051 and 4052 Graphic Desktop System on display which also utilize DVST displays.

Tektronix DVST Graphics Terminals and Graphic Desktop Systems were the choice in computer aided design in the 1970s and early 1980s. It was nearly impossible to go into a technology or research company and not see these terminals everywhere. What a wonderful journey that unfolded from Bob Anderson's storage tube.

If you have never watched a DVST graphic terminal in operation, we have videos of both a 4010 and a 4014 in operation on our Video Gallery. They are still amazing to watch drawing images.