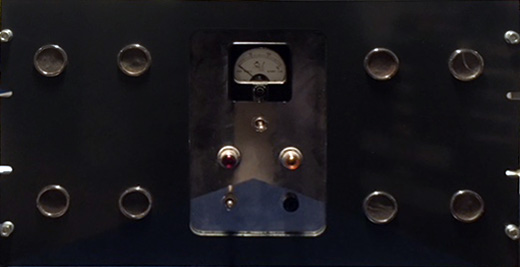 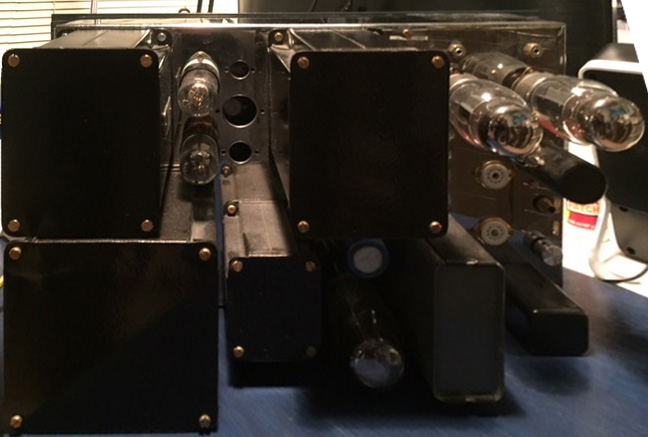 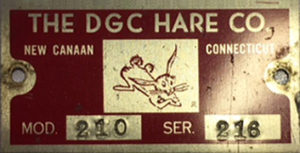 The Grass Valley Group was formed by Dr. Donald Hare in 1959.  Dr. Hare had just left the D. G. C. Hare Company (actually fired) and his plan was to hire four or five engineers who wanted to do research in the area.  Dr. Hare settled in Grass Valley, CA, because of the beauty of the area.  He continued with theater amplifiers for Cinerama now using the new solid state devices.  They shared a building with Litton but there were tensions so Dr. Hare found a run-down plant that had been a chicken processing facility.  With the profits from the Cinerama order Dr. Hare bought 3 acres of property on Bitney Spring Road.  He built a small facility and also a home for he and his wife Hazel.

Orders were lean and eventually the A. B. Dick company gave them an order for a precursor of the fax machine.  Times were lean. Dr. Hare did not take a paycheck, he had borrowed on his life insurance policies, and he cashed his remaining $25,000 check that he kept for five years from the sale of the D. G. C. Hare Company.  Business picked up in 1963 with sales of their 610, 621, and 622 audio amplifiers for broadcast stations. 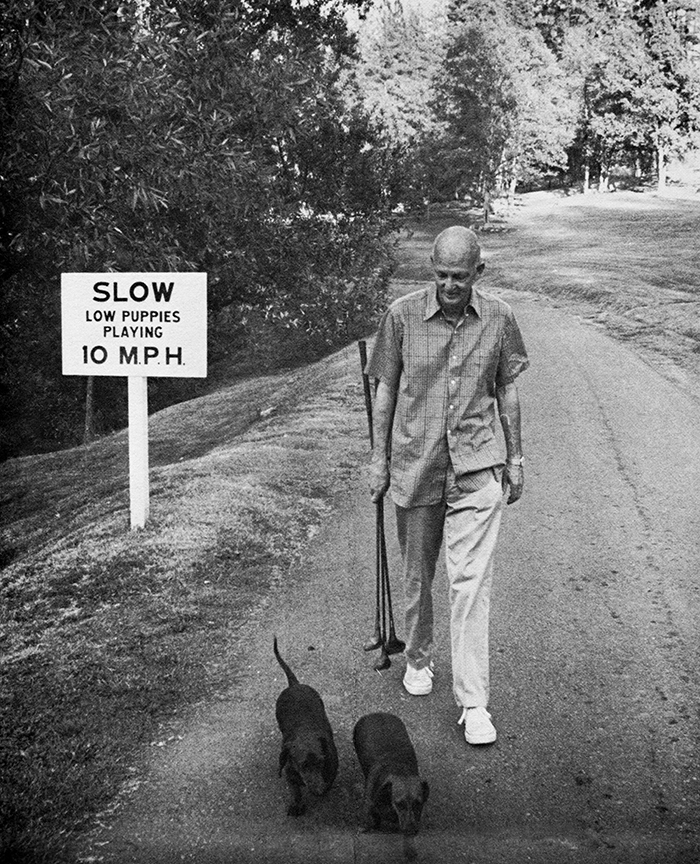 Dr. Hare was looking for growth and the television industry seemed like an emerging opportunity.  They designed the 700 Distribution Amplifier and took it to New York to demonstrate it to CBS and ABC.  CBS wasn't interested but ABC gave it a thorough evaluation.  When it was returned they went to Chicago to the NAB show and set up the equipment in their hotel room.  They lured potential customers across the street to the hotel room for a demonstration and within a few months they had received about 50 orders for the 700 and a follow-on 705 Distribution Amplifier.

Original GVG Model 700 video distribution amplifiers.  Top is for a rack frame while the bottom is a rack mount.

They talked with engineers in the television networks and eventually designed about 70 different products.  By 1966 orders were coming in faster than they could be filled.  Business was so good that Dr. Hare made it policy that the company would not take government contracts.  He had purchased the 80 acres behind his original 3 acres and by 1967 the decision was made to take the company public.  GVG built their first switcher around 1968. There were many strong competitors then including Riker, RCA, and Sarkes Tarzian. The first GVG effects joystick used a Baby rattle black ball on the end of the metal joystick. That first switcher was obtained back from the station that originally bought it and for some years it was in the main building on Bitney Springs.

This March 31, 1969 Electronics article features the early history of Grass Valley. Click on the image to view the PDF. 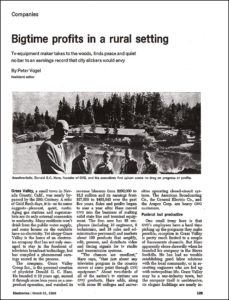 This July 20, 1973 TekWeek announces the intent by Tektronix to acquire the Grass Valley Group to expand its television test equipment to a full value line for television editing, control, and distribution. 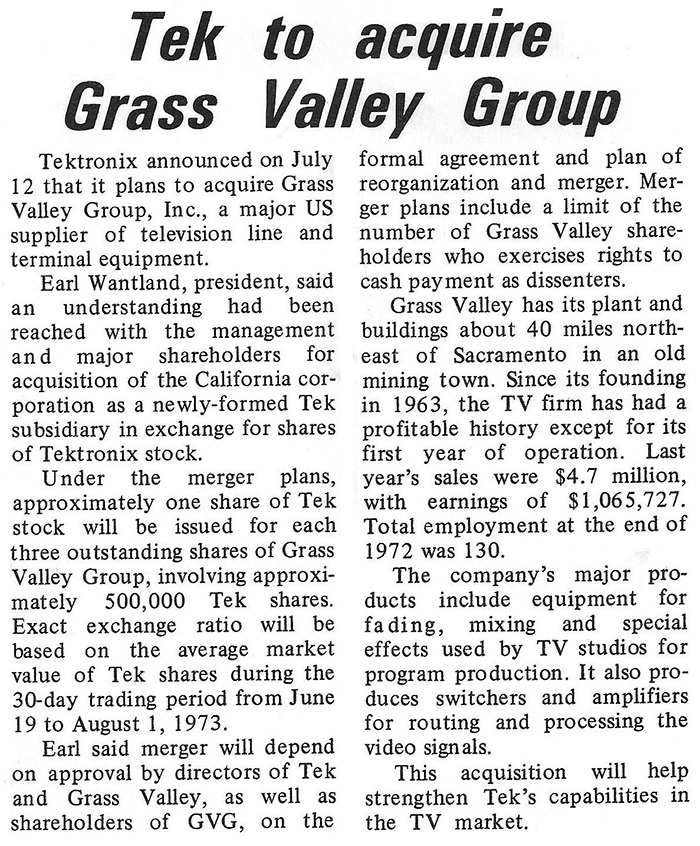 This August 8, 1973 TekWeek defines the terms of the agreement to acquire Grass Valley Group. 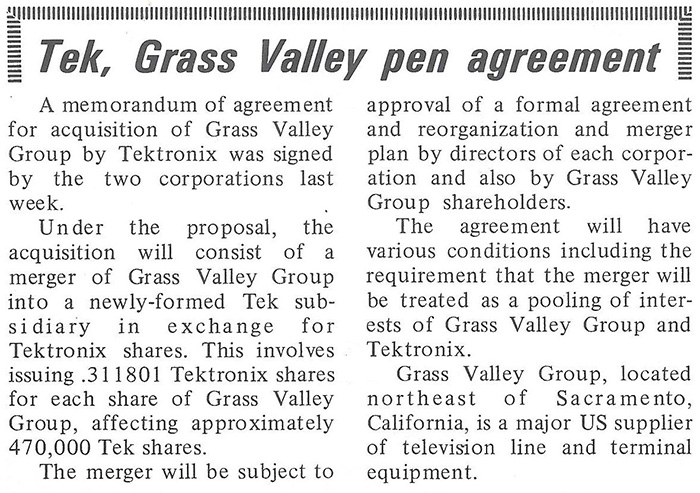 This January 25, 1974 TekWeek describes the vote to acquire Grass Valley Group at the annual shareholders meeting.  Click on the image to view the PDF. 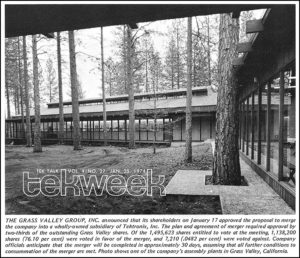 This March 1, 1974 TekWeek describes the officers and reporting structure of Grass Valley Group. 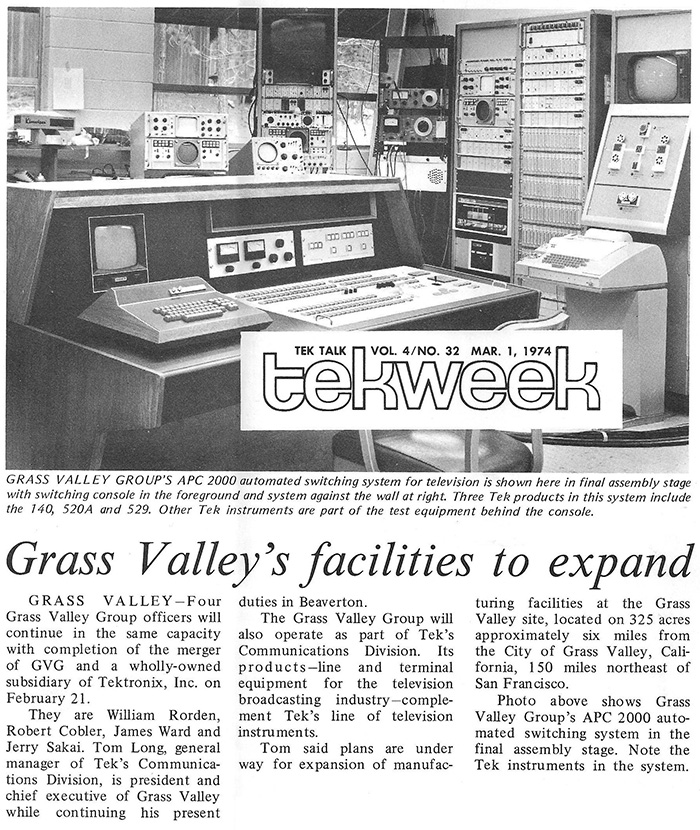 This July 3, 1974 TekWeek describes Tektronix' interest in acquiring Grass Valley Group.  Click on the image to view the PDF. 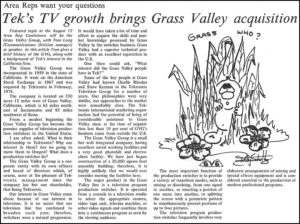 This March 1, 1974 TekWeek describes Tektronix President Earl Wantland's visit to Grass Valley. Click on the image to view the PDF. 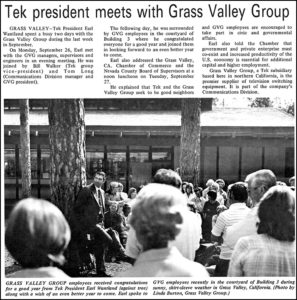 Fire destroyed the administrative offices in 1977.  This September 9, 1977 TekWeek describes the fire. Click on the image to view the complete TekWeek PDF. 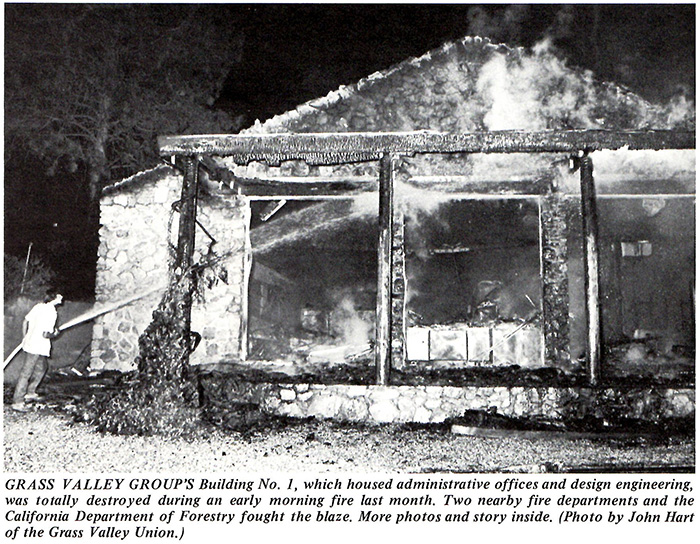 This March 18, 1983 TekWeek features the purchase of 160 acres for expansion to Nevada City. Click on the image to view the PDF 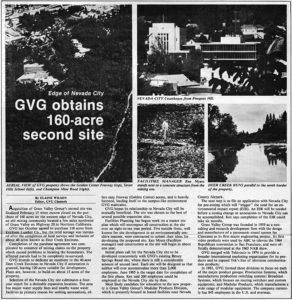 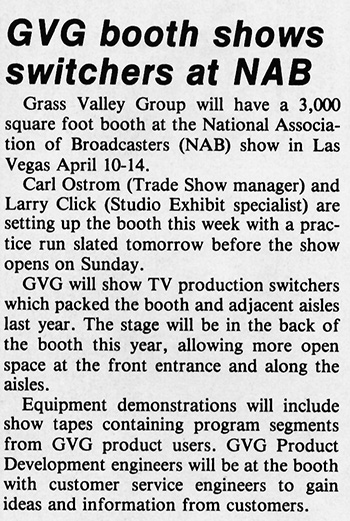 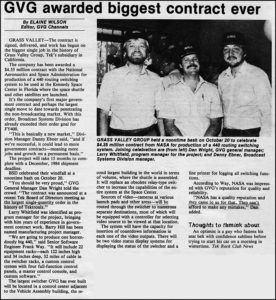 This May 8, 1987 TekWeek features Grass Valley Group success with their new products. Click on the image to view the PDF. 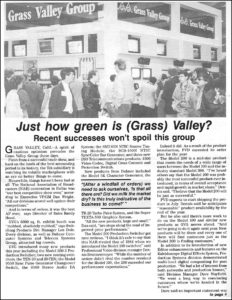 In 1984 Grass Valley Group acquired Dubner Computer Systems to add a line of character generators, video paint boxes, and graphics systems for television. The Dubner brand was eliminated in 1991 through integration into the Grass Valley Group.

This November 6, 1987 TekWeek features an article on the new Kadenza product.

The Grass Valley Group retained its name and was operated as a full subsidiary until the mid 1990s.  Tektronix kept GVG fairly isolated and did not integrate them into the company with common process and infrastructure.  GVG had expanded to nearby Nevada City and operated two sites, eventually consolidating on the Nevada City site.  This December 4, 1987 TekWeek article describes expansion at the Nevada City site.

Fire rages again at the Grass Valley site and the major buildings were saved. This September 16, 1988 TekWeek features an article on the fire. 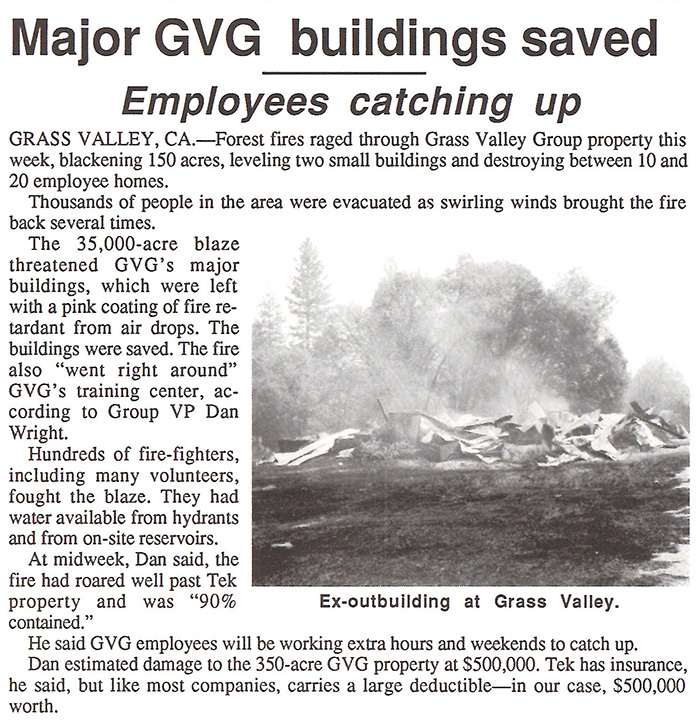 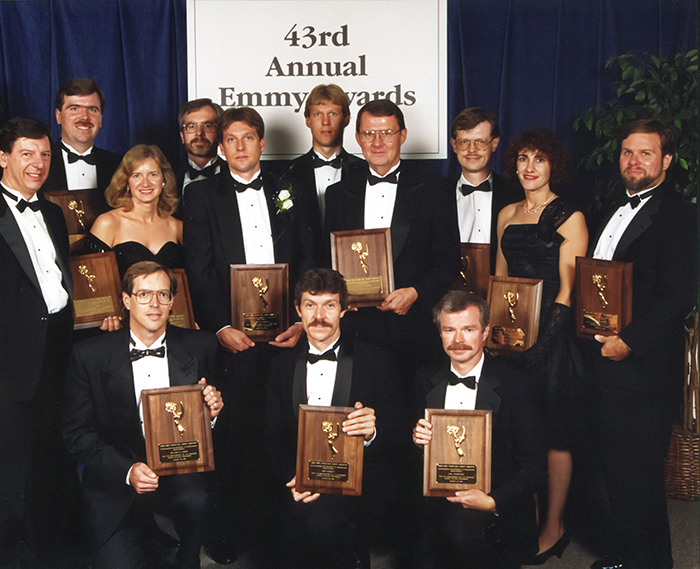 In the late 1980's and early 1990's GVG was organized into business units.  Each group published a short form catalog of their own offerings but we have none at the museum.

This 1991 Grass Valley Group catalog highlights some of their products.  Click on the image to view the PDF. 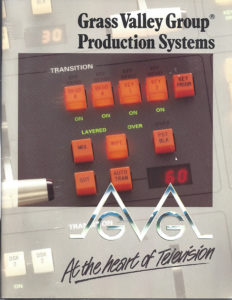 This September 23, 1994 TekWeek features the unique mine water cooling system at the site.  Click on the image to view the PDF. 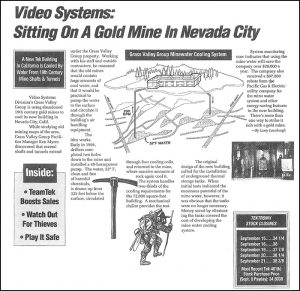 By the late 1990s Tektronix decided to split up the company and return to its roots as a test and measurement company.  GVG was sold in 1999 to a private investor Terry Gooding.

Grass Valley also had their version of cartoons.  Some of the switchers and other products had little cartoons or art on the boards. One of the  model 1600 switcher boards had a wandering trace about the length of the board and it had a California Highway 49 sign by it. There was a transient suppressor  daughter board in the model 300 switcher and when you removed it there was a Pacman character eating a pulse waveform on the board.  This model 300 distribution amplifier has a race track where the GVG car far outperforms the Brand X car.

We have a Model 1200 Production Switcher on display at the museum.  This switcher has the famous "T" handle that all GVG switchers had but is a digital switcher and so lacks any sources to operate.  The "T" handle was also used as a prop in the first Star Wars movie on a model 1600 switcher. When the Death Star fires on the planet you see an operator moving the GVG "T" handle to fire the weapon. This was highly amusing to everybody in the switcher group. 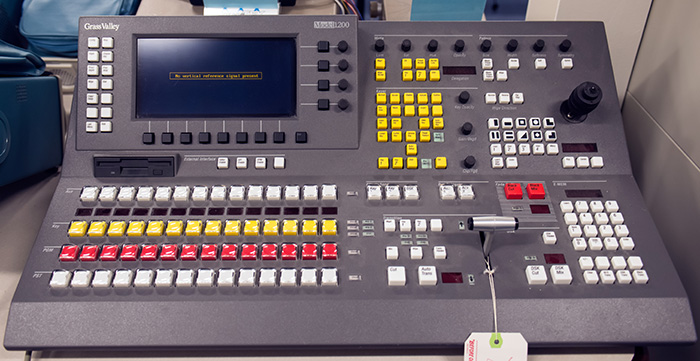 We have This Is Grass Valley, GVG Services Sampler, and The Gold In Grass Valley videos on our Video Gallery and a story How It All Began on our Employee Stories (well, actually Founder's Stories).

We also have this Grass Valley mug. 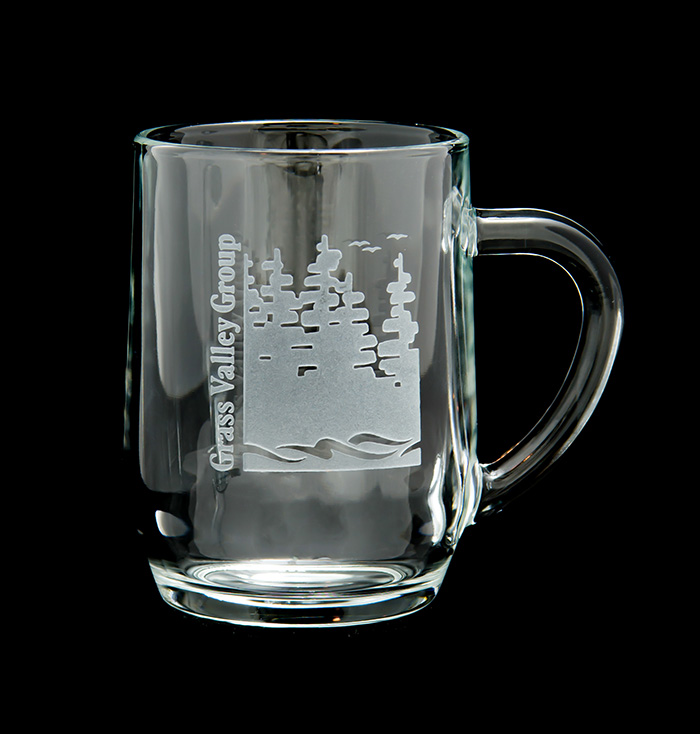